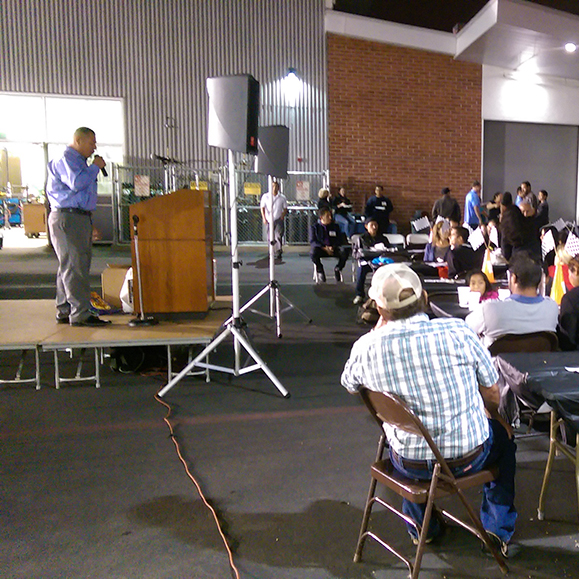 Spanish-speaking families, current students and potential ones spent the evening of Oct. 16 at Palomar’s Industrial Technology Center to hear presenters speak about the Diesel Mechanic Program and working in the trade.

The festivities were the eighth installment of an event known as Tarde De Familia. Tarde De Familia is the brainchild of Dr. Rudolfo Jacobo, an associate professor in the Multicultural Studies Department.

“I began [Tarde de Familia] about the same time that I arrived here, probably the second semester. I noticed in my classes there were mostly Latino/Hispanic students in my classes taking Chicano studies. They were first-generation college students, many perhaps with parents that never had even gone to high school. They had never really met professional Latinos that come from the same backgrounds, socially and economically speaking,” said Dr. Jacobo.

Dr. Jacobo said the event was inspired by weekend gatherings that his family often held when he was a child where the family would eat carne asada, catch up with each other and network to find work, arrange a ride to the doctor, or to solve other problems.

Dr. Jacobo said, “That was their time to help each other out; that was their ‘networking.'” Dr. Jacobo added that he wanted to create something similar to that in the academic setting.

One goal of the event is to allow students to meet professionals to show what can be achieved through hard work and dedication, and to allow the students to network with them.

One of the presenters, Sergio Hernandez, a professor, and the Department Chair of the Diesel Technology Program said, “I want you students to know that opportunity is a key for you to use to get to where you want to be.”

The other goal is to invite the families and to allow them to take ownership of the academic space. This goal has created another event held each semester called “The Family Institute,” which is like a ‘College 101’ for parents of students. Jacobo said he feels that if the parents feel at home at the college then the parents will transmit that to their children and be supportive of the child going to college.

Ignacio Velasquez, a parent of three said, “This is great. That the school does this shows that they care about the children.”

The first event five years ago was a small, informal gathering of 35 people in a small classroom. In just a few years the size has increased 10-fold to over 350 people. “Since then, it’s just grown tremendously in the last couple of years,” Dr. Jacobo said.

The event allowed attendees to make contact with many of the departments and services of Palomar College. There were tables set up around the courtyard to enable attendees to talk to Gear Up, Veteran Services, Trio, North County Educational Opportunity Center, Career Center, Financial Aid, World Languages Department, STEM, EOP&S, ESL, and more. The event was catered by Mr. Taco. They provided pollo asado tacos, refried beans, rice, tortilla chips, salsa, jamaica and horchata.

The event is held biannually. This semester the event was funded by a grant from Student Success and Equity. Because of this the event added evaluations for the attendees to give feedback.

Different semesters have had different areas of focus. Some of the arenas have been: the teaching field, the medical field, the business sector, and the engineering field.

A student volunteer Norma Villa thought the event was a great success. She said they had over 30 volunteers. This event was her first time attending.

Sergio Hernandez said that a parent after hearing the presentation asked “What if the parent wants to take the classes to become a diesel mechanic?” and he replied, “It’s never too late to better yourself.”