Ceramic artist unsure how to mold his future career

The decision whether to follow your passion or pursue a career with financial stability is never easy. Pursuing a technical degree may make sense, however, the love for art isn’t always easy to leave behind. And that’s why one Palomar student returned.

Bob McAleese is a 24-year-old ceramic student who just returned to college after taking time off.

His passion for ceramics happened almost by accident. When he needed an elective in high school and the drawing class was full, he was introduced to the ceramics teacher and enrolled in the class.

“I got the bug,” McAleese said. In his last semester of high school he dropped calculus and doubled on ceramics.

Then McAleese began his journey at Palomar in 2008 doing four semesters in a row of business and ceramics classes. When he was ready to transfer to pursue a business degree, plans changed and McAleese chose a different path.

He stayed home and began working full-time as a manager at a tuxedo shop and stopped doing ceramics.

That’s where the split happened, he said. When it came down to deciding what to do with the future, which route to take, it was a challenge and one he continues to struggle with.

“I’m still doing the soul searching for which route I want go and taking everything that comes with it,” McAleese said.

Sasha Jonestein, associate professor of art ceramics, has known McAleese for nearly seven years. She has been his professor every semester he took ceramics at Palomar.

“It’s a hard field to commit to … it’s not an easy road so it took him some time to decide where his commitments lie,” Jonestein said. 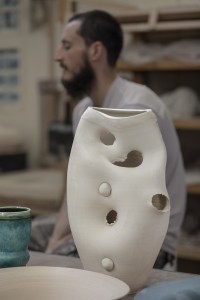 He stayed in the position of store manager until 2011 when he decided to quit and begin to rekindle the flame he turned away from – ceramics. He said not being expressive is difficult for him.

Having support really helps make the decision easier and without that life’s tough, it can be lonely, McAleese said. The main support in his life is his mom. She saw a skill in him early on and has always stood in his corner, believing he could make it happen, McAleese said.

He also has an older sister, Tina, and a newborn nephew. He said he always keeps family in the back of his mind. He lost his father when he was young and having a newborn baby in the family reflects new life to begin a new journey. He likes to push more out of himself to bring out the childhood playfulness that ceramics can incorporate. Essentially it’s mud and earth that can be played with.

McAleese said it has been difficult coming back to ceramics after dropping it and has encountered resistance.

His solution was to create his own personal space at home, cleaning out the garage and organizing. Despite having his own studio, he enjoys being at Palomar because his people are here, he said.

Working in a garage alone is so different. At Palomar, being around others, the triumphs and failures are all shared and they are bountiful here.

Making art is a community activity and everyone in the studio relies on each other. There is only one professor, and a lot of students need help, so McAleese spends a lot time tutoring the less advanced students on how to use the wheel, Jonestein said.

He is not only thoughtful and considerate toward others, but also patient which reflects who he is as an artist, she added. What he does isn’t easy because he works with such large objects, sometimes 10 to 15 pounds. Throwing that much clay takes skill and strength, which McAleese has, she added. Even two pounds of clay can whip people around on the wheel.

McAleese also has a strong world view that is embedded in his vessels, Jonestein added.

The idea of using recycled clay interests McAleese. Many times a piece doesn’t work out for someone, either from collapsing or a simple slip of the hand, and the clay gets thrown in a bucket. Then McAleese comes along and takes the “broken dreams” out of the slop bucket and gives the clay energy and a new life.

“He really thinks about what it means for that clay to be re-transformed and converted to something else,” Jonestein said.

Even in his own pieces, he tries to work with the flaws. Once, someone knocked into one of his vessels he had spent hours on, and he ended keeping it and working with it.

“He didn’t get mad, he embraced the experience,” Jonestein said. He asks himself how he will respond, then incorporates that experience into the life of the object.

McAleese said he wants to celebrate the flaws. It’s fun but also a frustrating process. When a pot breaks, it’s not the end of the world. A pot can always be made again, unlike certain things in life. You can’t always turn your back, you have to just deal with it, McAleese said.

He said he gravitates toward ceramics to tune out the world. He is sensitive to the feelings of others, especially when they are having a bad day, and when he feels the pulsating clay between his fingers, it helps him feel present in the moment.

McAleese is still undecided on his future plans. He is almost done with the classes he needs to transfer yet he still feels the rippling between art and a business degree.

“If I were to pursue the business degree, i would still have art on the back burner, but that’s the question, do I want to take it off the back burner and make it my focus,” McAleese asks himself.

He plans to be at Palomar next semester, as he is in the process of training to be head studio tech.

He said he hopes one day to financially provide for his future family with his art. He said that may make him ignorant. But he believes that when you withhold gratification and apply good energy to the things you love, the possibilities are endless. Even though he isn’t happy about leaving a good paying job, art is where his soul is, McAleese said.

McAleese will have his work shown in both the student art and craft sale from April 22 to 25 and the opening for a student art exhibition and open house on April 24.

McAleese will have his work shown in the student art and craft sale till May 8.