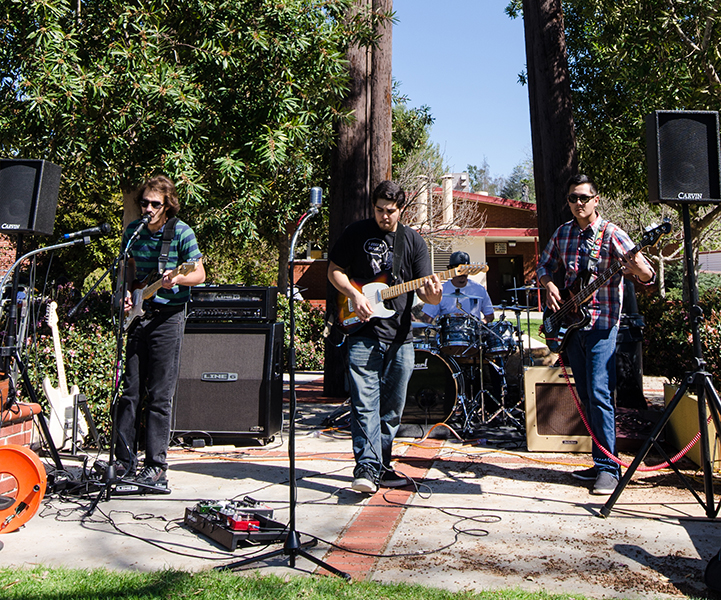 The amplified music stops, the voice fades out, and lead singer Jimmy Garcia steps away from the 1960s-era microphone.

“Well, that’s all I have to say about Vietnam.”

A little sweat on his neck, after playing in the sweat box of a garage for the hour-long band practice, Garcia, 21, the lead singer and guitarist of local band The Bawdry Brothers, puts his guitar down and his two band members Andre Berdeja, 21, and Jose Angel, 21, grab a couple of beers and play some horseshoes while they spoke with The Telescope.

The Bawdry Brothers is an Indie, Rock Roll, soul, rhythm blues and at times reggae sounding band of four members that entertained me for the better part of a lazy Sunday afternoon. Unfortunately their lead rhythm guitar player Steven Garcia, 21, could not attend.

I immersed myself in the dead center of a steamy garage, and listened to their raucous sound perched on an old tire. A sneak peek into the Bawdry band’s music rituals turned out to be enlightening and entertaining day and I discovered they were a relaxed conservative band, with a not so conservative sound.

“We don’t want to be flashy, I feel like flashy people are just trying to compensate for their shitty music. We keep it casual and let the music do the talking,” Jimmy said.

The Bawdry band practice was held at Jimmy’s parent’s place in deep Oceanside, at a location known to the band as “Garage # 2,” a quaint, four-bedroom house with a pool, horse shoe arena and three happy dogs strutting about the vicinity.

Lounging poolside the band told me of all the places they had played thus far. They have played twice at the House of Blues, multiple times at the Oceanside Beach Bar and Grill, the Del Mar Summer Concert series and a couple other venues as far reaching as San Francisco, where the band had spontaneously changed their name to “Sugar Loaf” for a couple days after playing on a street with said name.

Their gig at Palomar College for the national Adjunct Day is where I was lucky enough to first discover The Bawdry Brothers.

Up to date they have released one album titled “Escape the Farm” with eleven songs. The album cover depicts a lone scarecrow with the background of a rural jam spot out in Vista, and is representative of their push to make it out of the small town living and make it big. The band played in Vista until they were unfortunately robbed, and stopped playing at that location as a precaution.

“It was third world problems.” Angel said chuckling. “They kicked in the door and only took all the backup equipment.”

The members of the band have been acquainted with each other since grade school and solidified their bond through music. Experimenting, memorizing, and eventually performing music to live audiences, at time’s racking up a small amount for their entertainment.

“We got forty dollars some nights, as long as the bar got business.” Andre said.

The final goal of the Bawdry band hasn’t quite come to fruition. At the moment, they are satisfied with just performing whenever possible. They all work, have girlfriends, and a few of them attended Palomar College at one time.

“We aren’t really promoting ourselves as much as we should be. We are pretty terrible with social media.” Angel said.

In their pubescent high school years the first band name they held was the “Vigilantes.” Lacking gear and money they had no other method to record. So being resourceful, they utilized the recording ability of the head buds of an iPod.

“I would light up some candles in the bathroom, turned off the fan, I would get down on my knees on the tile floor and played and sang into the recording.” Jimmy said laughing.

Upgrades have been significant since then. In Garage #2, a space big enough to fit two cars, they own a big black vocal booth where recording takes place, plenty of amps along with stand-up speakers. And Andre has since upgraded his first “Cheap ass” Taiwan Sunlight drum kit with symbols that sounded like “trash lids” and currently rocks a Pearl X series set, with a $600 snare to boot.

The jam session that lazy Sunday was not the normal routine as this was the first time the band played while Jimmy sang straight out of the 10 by 5 foot wooden vocal booth. This was done so he could record live at the same time.

“So we’ve never tried this before. He’s gonna fucking burn up in there.” Angel said.

Angel sat on his Rasta decorated amp with one leg swooped over the other, emotion filled facial expressions expressed with every fluttering flick to his bass. Andre was comfortable and laid back on the drummersseat, hair popping out of his baseball cap like wings. The only one not seen was Jimmy, until the music started, and his voice was heard. The sound of his soulful voice, painted a picture and told his emotion all on its own.

Rhythm guitar, bluesy suave vocals, and plenty of soulful belting, the band played their whole album to me with no breaks in between, they just pushed right on through. Some songs gave more of an irie feel, and a stoner pace with choppy guitar chords reminiscent of Pepper and Sublime. While songs like “Shake your Youth” hit more on a punk background, ingraining political lyrics in the mix. When they did lay a Sublime song down called “BadFish” I propositioned to sing, and they let the journalist step up to the microphone. Based on the round of applause the band gave, I guess I did well.

There was nothing that let me judge them or categorize their style into just one genre, as the bands objective is to diversify their sound, and diverge from verbose.

“We try doing new stuff, and avoid repeating the same thing over and over.” Angel said.

The Bawdry Brother’s aspire to play at new venues like Hangar 24, the Del Mar San Diego Fair in the Dome, and expand as far north as The House of Blues in Anaheim. Obviously global reach is the end goal, but they’re taking it one venue at a time.