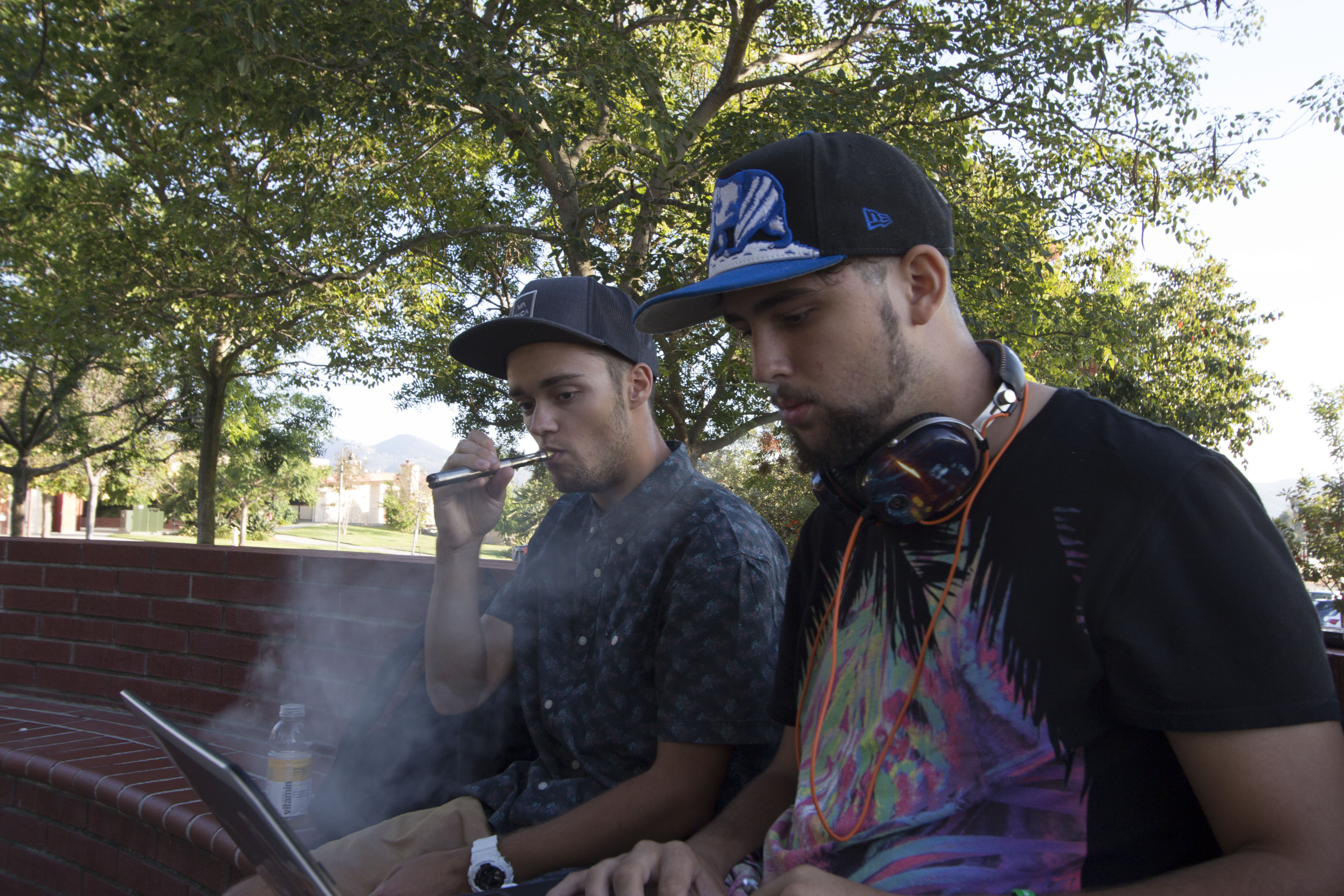 On campus there seems to be some muddiness regarding the no-smoking policy, the usage of electronic cigarettes, also known as e-cigarettes.

According to Adrian Gonzales, assistant superintendent and vice president of Student Services, the current policy does not include the use of e-cigarettes but that may change.

Policy dialect changes have been considered, however Gonzales stated that Palomar wants to stay in alignment with the city of San Marcos.

On Oct. 28 at the San Marcos City Council meeting, an ordinance was adopted to ban the use of e-cigarettes in public places. This ordinance will become effective on Nov. 28, 2014.

In order to include e-cigarettes in the current policy at Palomar the issue must be reviewed and approved by first the Policies and Procedures Committee, then the College’s Strategic Planning Council and then to Palomar’s Governing Board.

“We do have plans to move the discussion forward,” Gonzales said. “In fact the non-smoking policy is on the agenda for the next committee meeting.” Although Gonzales anticipates it may be sometime during the Spring term before a final decision is made.

The current campus policy states: “There shall be no smoking or use of tobacco-related products on Palomar Community College District property. The District shall provide and maintain a workplace and learning environment that is smoke and tobacco-free to promote the safety and health of students, employees, and the public.”

Until a change in the current policy is made regarding e-cigarettes a citation cannot be issued to students for the use of e-cigarettes on campus.

“Often times when I’ve seen groups of students, it’s typically one or two people smoking, not the entire group,” Gonzales said. “If we can encourage our peers to remind each other ‘hey, you really shouldn’t do that on campus’, hopefully we can reduce the number of students that violate that policy.”

If students choose to ignore the current policy and continue to smoke on campus the next stage would be to institute a fine. Gonzales said they are approaching that issue delicately. He is very reluctant about adding a monetary fine, not wanting to add to their financial burden, but to assure a safe, healthy environment a fine may be the next step.

According to Gonzales, a campaign is in place to discourage smoking on campus. The campus police have been handing out more citations in problem areas, and signage also has been increased to encourage compliance.

Associated Student Government President Jason Hosfield said via email that enforcement on campus is still an issue with both traditional and non-traditional tobacco consumption.

When it comes to the use of e-cigarettes, the lines become blurred when discussing the risks versus benefits to the smoker and to the public.

Some students do see it as a positive alternative to using regular cigarettes.

According to Edward Neumeister, a student at Palomar and an e-cigarette smoker, said “It’s a healthy transition to getting off cigarettes.”

A nonsmoker agreed it is better than traditional cigarettes.

“The odor is different, not as uncomfortable as regular cigarettes,” said Carmen Perez, a dental technician student at Palomar and a non-smoker.

A recent study was conducted and reported in the July 31, 2014 edition of the journal Addiction. The study was a review of electronic cigarettes content, safety, effects on smokers, and the potential for harm and benefits.

The conclusion of the study states that regulating e-cigarettes as strictly as cigarettes is not warranted based on the current evidence. They encourage health professionals to consider recommending e-cigarettes as an alternative to smoking and a “possible pathway to complete cessation of nicotine use”.

E-cigarettes are marketed as an alternative, but some view “vaping” as a way to circumvent smoke-free laws by enabling users to smoke anywhere. Non-smokers are still bothered by the vapors, even though they evaporate quickly.

Lenka Schanka, staff assistant at Health Services, said there is a smoking cessation program available at the Health Center to help students quit smoking. The use of e-cigarettes is not offered as an alternative or encouraged, rather, nicotine patches are provided at a minimal charge and nicotine gum is provided at no expense to the student.