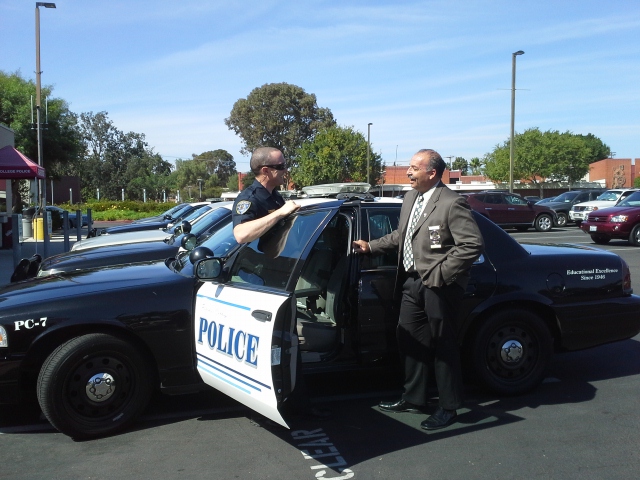 A day in the life of Palomar’s chief of police

A day in the life is an ironic statement for a man whose daily duties are never the same. I spent a day with Chief of Police Mark DiMaggio to get an inside scoop of what one day in the life of our police chief is like here at Palomar College.

While Chief DiMaggio participates in meetings and checks reports on a daily basis, his routine activities outside of the office are as uncertain as the events that occur on campus and beyond it. But he admitted that’s one thing he loves about his job – it’s never the same so there’s no dull daily routine.

The chief’s mornings consist of reviewing reports for accuracy and engaging in various meetings. His extensive background in the police field means he has the knowledge to make the best decisions for the campus and bring in new developments to enhance student safety.

Once out of his meeting, one of a few that morning, the chief invited me into his office where we talked for a few minutes about his new role at Palomar. The chief then gave me a tour of the department; he showed me the different rooms in the building, explained what they were used for, and introduced me to the officers who were on duty. We entered one of the rooms where the surveillance takes place and Officer Jesus Montes gave me a tour of the room where campus surveillance is monitored and the dispatching occurs.

It was fascinating to see all that goes on in the Campus Police department such as parking surveillance, calls and camera monitoring. These officers are hard at work ensuring our safety while we, the students, are hardly aware of it. And in the event of an emergency, “While everybody is running away from the danger, (they’re) running to it,” the chief said.

After taking care of business in the police department, the chief takes time to walk around campus, which he does regularly to make sure that everything on campus is under control and the students and staff are doing OK. The chief and I walked through the library, across the Student Union, and in other buildings and areas of the campus, where he greeted students and staff, asking them how they were doing and letting them know he was available if they needed anything.

After ensuring that the campus was safe, the chief and I drove to the Escondido campus, once again walked around, and met with some of the officers working there. Everything at the Escondido campus was in order as well, so we headed back to the main campus and attended the grand opening of Palomar’s new Humanities Building.

While a calm and rather uneventful day, following the chief around and hearing his philosophy in regards to his career was both informative and intriguing. The thing that’s more significant than Chief DiMaggio’s duties is his passion for what he does and his genuine concern for students, staff and the overall safety of the campus. He told me it’s his passion for establishing safety and justice that has kept him in his career for so long.

The chief is just as involved with his officers, checking in with them throughout the day and constantly testing them to make sure they’re doing their best job.

“I do it in a way where we’re still joking around but at the same time I’m making sure they know what they’re doing,” he said.

He also said keeping a positive attitude and good sense of humor is critical in his career and said that was easy for him since he loves what he does. Nonetheless, he makes sure the job that he and his officers are doing is done with efficiency.

Whether the day is uneventful or filled with chaos, Chief DiMaggio is always at work both in the office and on campus, making sure everyday is a day in order.