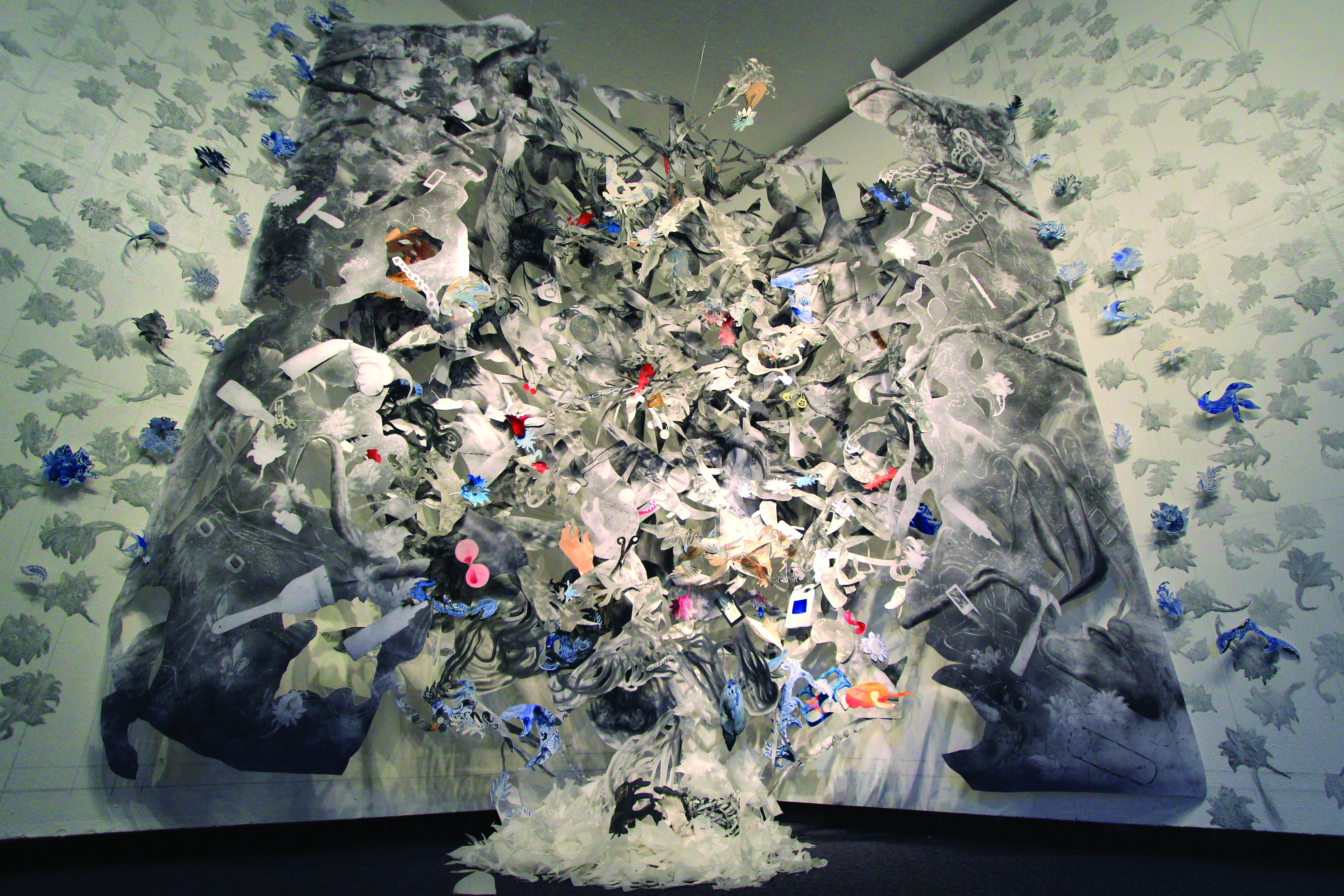 An interactive encounter at the Boehm Gallery

The first exhibit of the semester at the Palomar College art gallery welcomes students to interact with the art work from two different artists.

Alex Callender from Brooklyn, N.Y. and local artist Greg Holden Regan from Encinitas, Calif. have their pieces on display at the Boehm Gallery until Sept. 19. in a show titled “Oblique Intentions.”

Callender’s show called “Everything Has Its Nature” is an expression of humans’ relationship to the natural environment. In the back corner of the room is the main piece of her exhibit. She used some of her old art pieces to put together a three-dimensional paper jungle of gray and white material objects entwined with a tree.

Unusually bright flowers popped out, which Callender used to express the idea that people romanticize and have a “fetish” about an idea of nature, but rarely do we see these bright reds and blues in real nature.

The material objects she entangled in the paper cut-out jungle are “un-precious items of consumer life” that we normally walk past everyday without taking notice of, such as hammers and chains.

It is a blend of industrialism and consumerism with the idea of nature that people have created in their minds. This creates a “new nature,” Callender said.

Callender said her biggest challenge is that everything she creates eventually collapses and gets recycled into something new.

“Nothing is ever done,” she added.

At the other end of the Boehm Gallery is Regan’s exhibit called “Seeing Thought Bubbles with Peripheral Vision” that add an entirely new perspective to the spectrum of interactive art.

With most of his paintings, he left an open space using chalkboard paint so anyone can add to the life of the piece. Chalk is placed next to the ones that can be drawn on. Regan said he wants people to feel comfortable expressing themselves and his artwork invites them to do that.

He said he struggled with dyslexia as a child and still does. Expressing himself through art and writing words in some of his pieces help him lose any inhibitions and getting over the “chalkboard” fear of spelling in front of a classroom.

“With this process (of creating work for the exhibit) I started to write more on my art … Getting rid of old feelings,” Regan said.

A woman at the opening day of the gallery spent a lot of time drawing on a piece titled “Read the Mind of a Superhero and you are a Superhero”, which turned out to be one that was not supposed to be chalked up. Regan said he didn’t mind at all because that is the whole point of all this experience.

The art evolves and Regan said he likes seeing the process. Within 10 minutes of the gallery opening on the first day, many people were writing and drawing on his paintings.

Michelle Hauswirth, a ceramics major at Palomar who works at the Boehm Gallery, said there are usually a lot of people who come to the gallery and opening day was a successful turn out. Many art teachers at Palomar give extra credit to students who attended.

“This show has been so much fun to be a part of,” Hauswirth said.