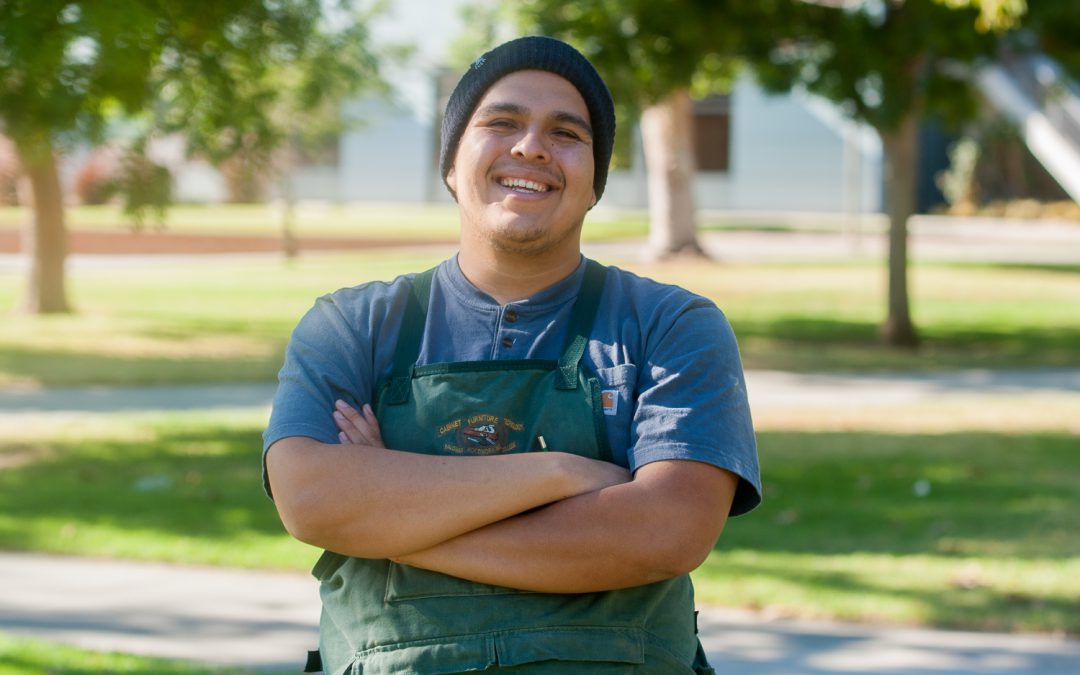 The 21-year-old Vista resident grew up helping his father on landscaping jobs. Today, with skills learned at Palomar College, he is pursuing a passion for working with his hands.

SAN MARCOS — Misael Venancio came to Palomar College with a vague plan to study computer science. Less than three years later, he had not only learned a trade at Palomar, but had landed his first job as a woodworker with a local company.

“I like computers, but I’ve always been an on-my-feet kind of guy,” Venancio said during a recent interview on campus, wearing his shop apron and smelling like freshly sawn lumber.

He grinned as he explained that he had been working on holiday orders at his new job with Cades & Birch, which sells handmade gifts and household items crafted in its Vista shop.

“This is my first job in actual woodworking,” he said. “In May I was hired on as the wood shop assistant, basically helping the main woodworker with cutting, assembling.”

Venancio’s story reflects the experience of thousands of students who are learning employable trade skills in one of Palomar’s many Career Education programs. Woodworking—formally known as “Cabinet & Furniture Technology” (CFT)—has given the 21-year-old Vista resident a new passion, as well as a fledgling career.

Palomar’s award-winning CFT program has received national and local recognition, including frequent honors for student and faculty work at the San Diego County Fair woodworking exhibit every summer. For Venancio, the woodshop at Palomar has been a refuge and a source of inspiration.

“I grew up the youngest child of an immigrant, who was a gardener,” he recalled. “So since I was a kid, I was always spending the weekends helping my old man, whether it was mowing the lawn, trimming trees, or setting up fences and irrigation systems.

“I’ve always had a fascination with wood—trees were always my thing,” he added. “But I didn’t think about woodworking until maybe 2016, when I saw the displays they had in the library here at Palomar. That really caught my eye.”

So far, Venancio said, he’s taken six woodworking classes at Palomar, and he is now an outspoken evangelist for the CFT program.

“This program saved me, in a way. I was just so directionless,” he recalled. “I spent at least a year developing skills and trying to get my own style down. It’s extremely rewarding in every sense of the word. These are skills you develop yourself; nobody can take them from you.”

Venancio said he ultimately wants “what every woodworker wants—to have my own shop.”

In the meantime, he’ll be in the shop, making his Christmas presents by hand: “Being Hispanic, I’ve got a large family, so I need to get a head start,” he said with a grin.