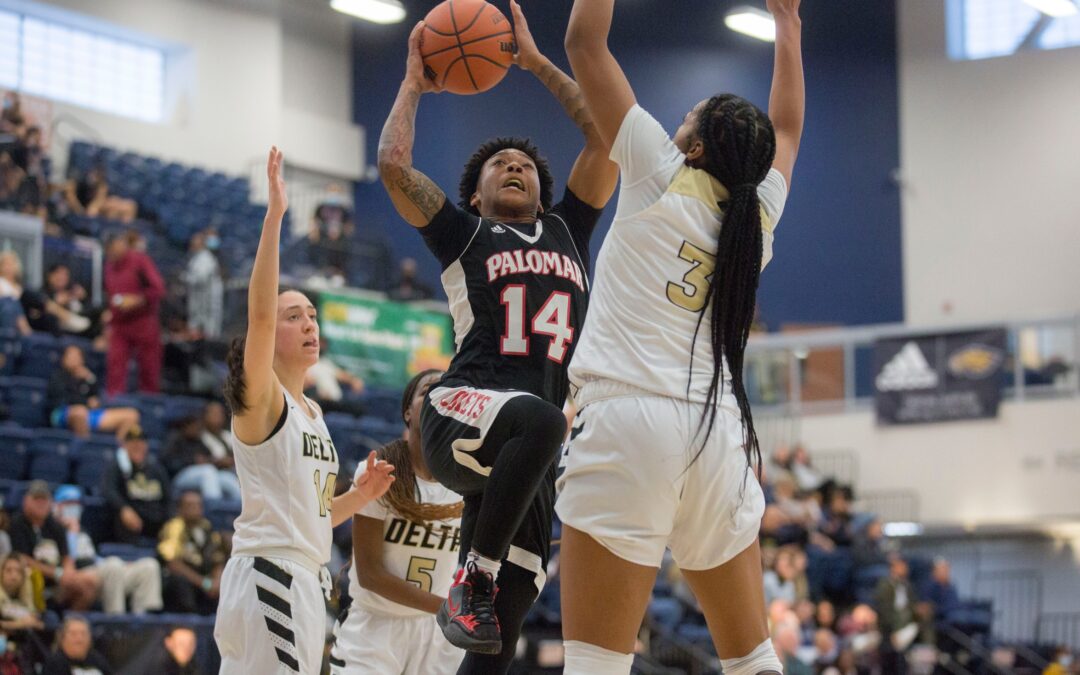 The team played in the “Elite Eight” round of the statewide tournament for the fourth time in six years, after going undefeated in its conference during the regular season.

Palomar, the number 4 seed in the CCCAA State Championship tournament, lost to San Joaquin Delta 72-66 in a fiercely competitive game that proceeded through four ties and five lead changes before the final result.

The March 10 quarterfinal match featured a breakout performance by Palomar’s Sara Ahmadpour, a sophomore, who finished with 23 points and 10 rebounds—her first double-double and best performance as a Comet.

The freshman guard Deajanae Harvey also notched 23 points—along with eight rebounds and six steals—and sank a half-court shot just before the end of the third quarter.

“I am just really proud of this team—this group has overcome so much, from having their 2020 season end at the Elite 8 due to COVID, to having their entire 2021 season canceled,” said Coach Leigh Marshall. “But they held on through virtual learning, Zoom workouts, masked outdoor workouts in the heat, and more. In a time when many players gave up, this group held on even tighter and didn’t break.”

During the season, the Comets won all 14 games against the other colleges in the Pacific Coast Athletic Conference (PCAC), finishing with an overall record of 26-3. In many other ways, too, it was an impressive season for the Comets:

A personal milestone came along for Marshall early in the 2021-22 season, when she earned her 200th win as the team’s head coach.

Meanwhile, Harvey became the first Palomar Comet to be named CCCAA Southern California Player of the Year, with 18.7 points per game, 7 rebounds per game, and 4.9 assists per game. Harvey was also named MVP of the Pacific Coast Athletic Conference.

“This team played together, and played for each other,” Marshall said. “We are so proud of them and excited for what the future holds for them.”