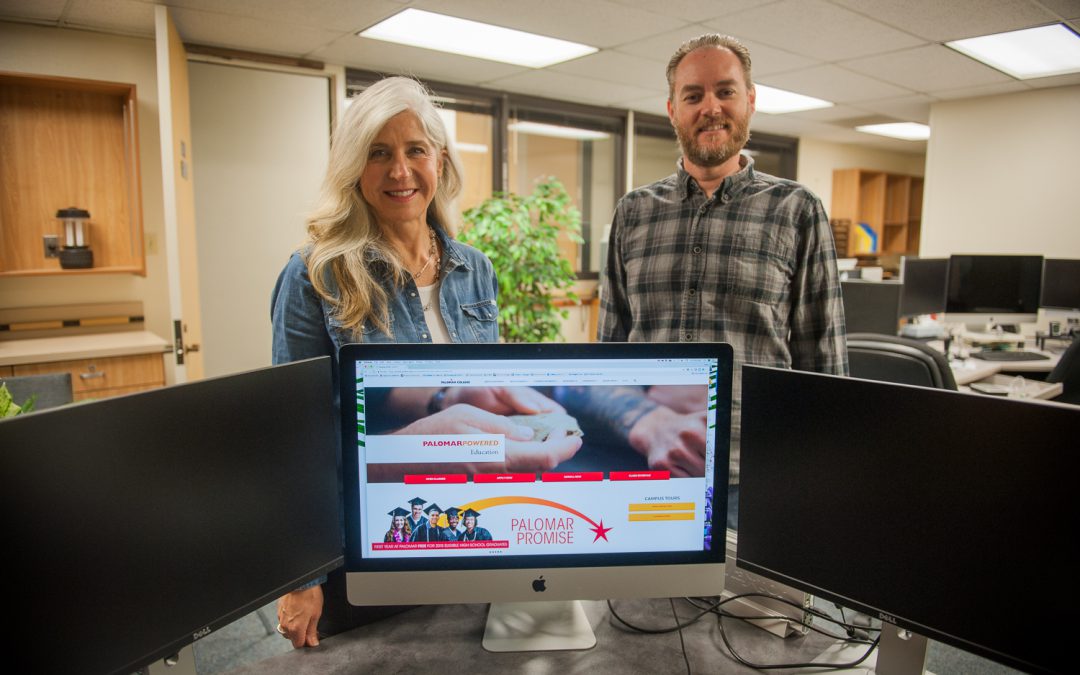 College webmasters have finished overhauling the Palomar website with a fresh look and smoother navigation, keeping the core functionality students are used to finding at palomar.edu. The rollout begins Wednesday, May 2.

In an age when private-sector organizations churn out new versions of their websites on a regular basis, colleges have many more variables to consider, from stringent accessibility standards to key functionality that students and faculty depend on, said Chris Norcross and Kelly Helming, who spearheaded the project.

“We feel confident this site will really give users a more complete picture of the modern, current Palomar College,” said Helming. “We’ve rebuilt the site to serve the mobile user with a more robust wayfinding experience through our sites.”

Right off the bat, users who visit the site on their smartphones will notice that it’s what web designers called “mobile responsive,” which means the site adapts to the smaller format of a phone browser.

“Roughly 30 percent of our visitors are on a mobile device, and it’s probably safe to assume that the majority of them are students,” said Helming. “Now, when they load the site, they’ll have a more modern and current mobile experience.”

While the overall appearance and other upgrades provide vast improvements over the previous version of the site, users will find the familiar MyPalomar (formerly eServices) and Canvas portals right where they have always been. Roughly half of the traffic to Palomar’s homepage goes directly to those two portals, said Norcross, and “neither of those systems is being affected by this website redesign.”

“One of our guiding principles was making sure none of our users would lose their way,” Norcross explained. “We made sure not to change things up so much that anyone would get lost.”

Meanwhile, the team had to ensure compliance with WCAG 2.0 Level AA accessibility standards, which govern everything from color contrast to font sizes. Norcross explained that accessibility means “making sure that anyone, regardless of their abilities, could make use of our site.”

After completing the design last fall, the ATRC team surveyed 280 Palomar stakeholders, nearly half of whom were students, and received overwhelmingly positive feedback. Since then, Norcross said, the project has felt like “the final sprint at the end of a marathon.”

The homepage is scheduled to be switched over to the new version by 8 a.m. on Wednesday, May 2, with the remaining pages making the transition over the following couple of days.