On eve of Veterans Day, Palomar College honors its own 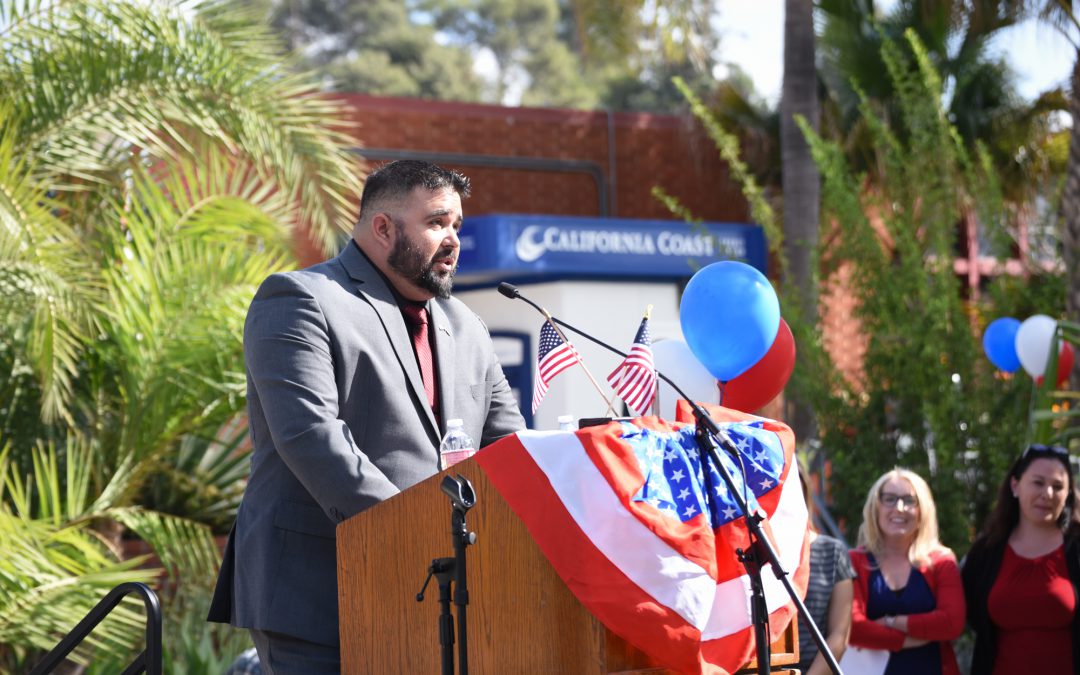 With the largest veteran population of any community college or university in California, Palomar furthers a tradition of serving the military that goes back to the college’s founding in 1946.

SAN MARCOS — On a picture-perfect afternoon, students gathered on balconies and on the edges of the quad as the bell in the clock tower tolled 58 times—once for every Palomar College student killed in action.

It was the most poignant moment in an hour-long ceremony to honor Palomar’s veterans on Thursday, Nov. 9.

On a campus with thousands of active duty service members, veterans and military dependents, Veterans Day arrives each year with fresh reminders of how deeply the culture of Palomar College is indebted to those who have served.

“I want us to always keep our veterans and their families at the heart of all we do, because it is they who make these educational opportunities possible for all of us,” said Superintendent/President Dr. Joi Blake. “They have made the ultimate sacrifice and commitment so we can enjoy our freedoms.” 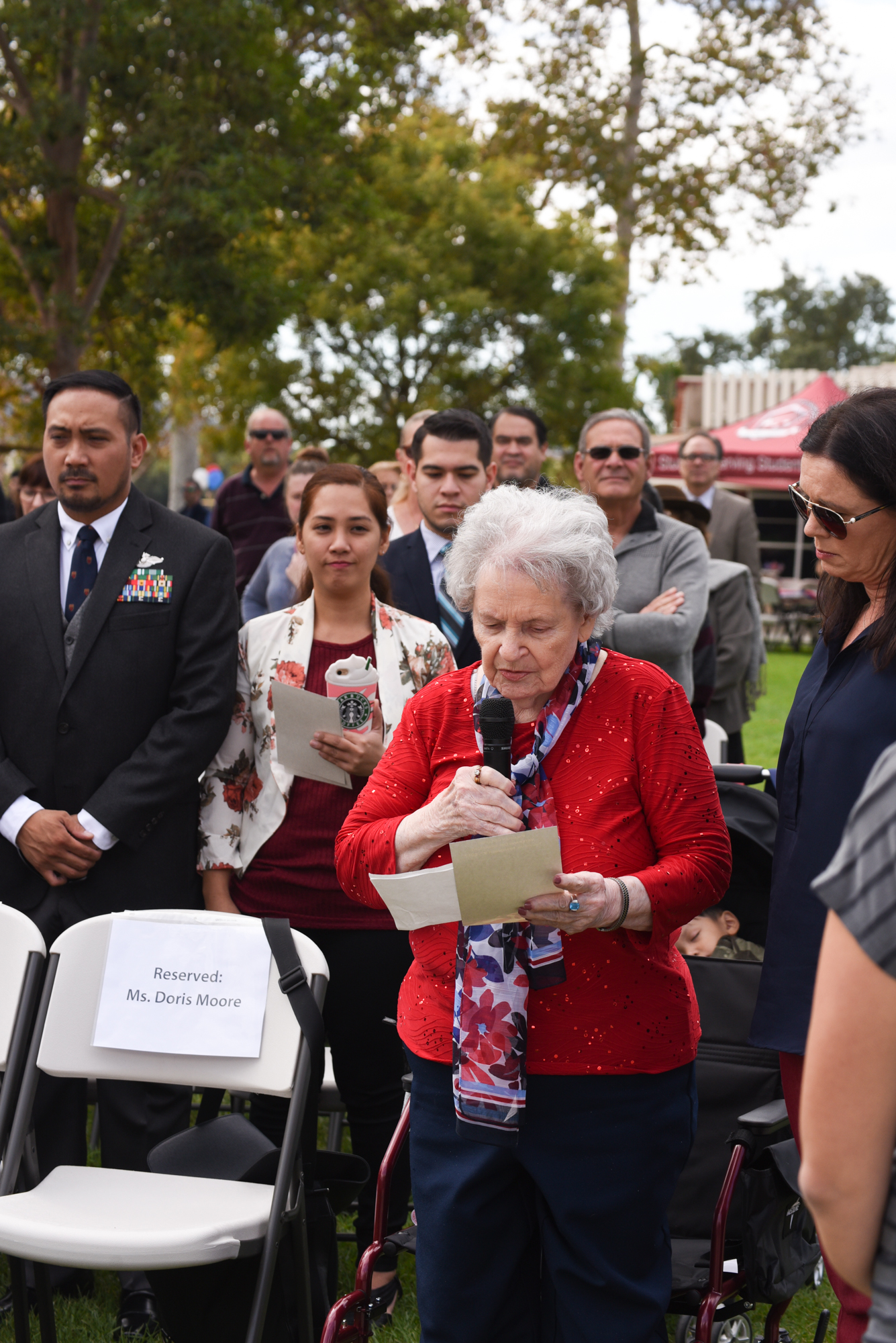 “One of my favorite parts of serving in the military was that ethnicity, or even skin color, did not matter,” recalled Borrero, whose parents are from Venezuela. “We were all equal. I learned that, in the heat of battle, it’s not about you, but the person to the left and the right of you.

“I stand here today and can proudly tell you that, just last year, I earned an associate’s degree from Palomar College, and God willing, I will be graduating next spring with a bachelor’s degree in history from Cal State San Marcos. My goal is to one day teach here at Palomar,” he said, adding with a grin: “So hopefully the history department has room for me.”

Horn said there are 1,200 veterans and military dependents enrolled and using their V.A. benefits at Palomar this semester. “The last time we (surveyed), there was a total of 5,500 active duty, veterans and dependents,” she added.

“The culture of Palomar College started with veterans,” Horn said. “Our very first student was a World War II veteran, and we still have the largest veteran population of any community college or university in the state of California.”

Horn, a veteran of the Marine Corps, recalled arriving at Palomar on the heels of her final tour of duty: “Two weeks after my last deployment, I transitioned out of the Marine Corps and came to Palomar,” Horn said. “There was this culture shock—I was in Iraq, and then two weeks later I was on a college campus.”

Lejearl Young, who served four years in the Marines before joining the Veterans Services team at Palomar this summer, sang the National Anthem during Thursday’s ceremony.

Afterward, Young pointed out that veterans bring with them a diversity of opinions and perspectives: “A lot of the veterans aren’t from here. I’m from Mississippi,” he said. “So I think veterans add to the learning experience.”

He said he also appreciates the fact that the college has staffed its Veterans Services team with former military personnel.

“Having veterans serve veterans is so important,” said Young. “We speak our own language, as veterans, and we can relate to each other in a special kind of way.” 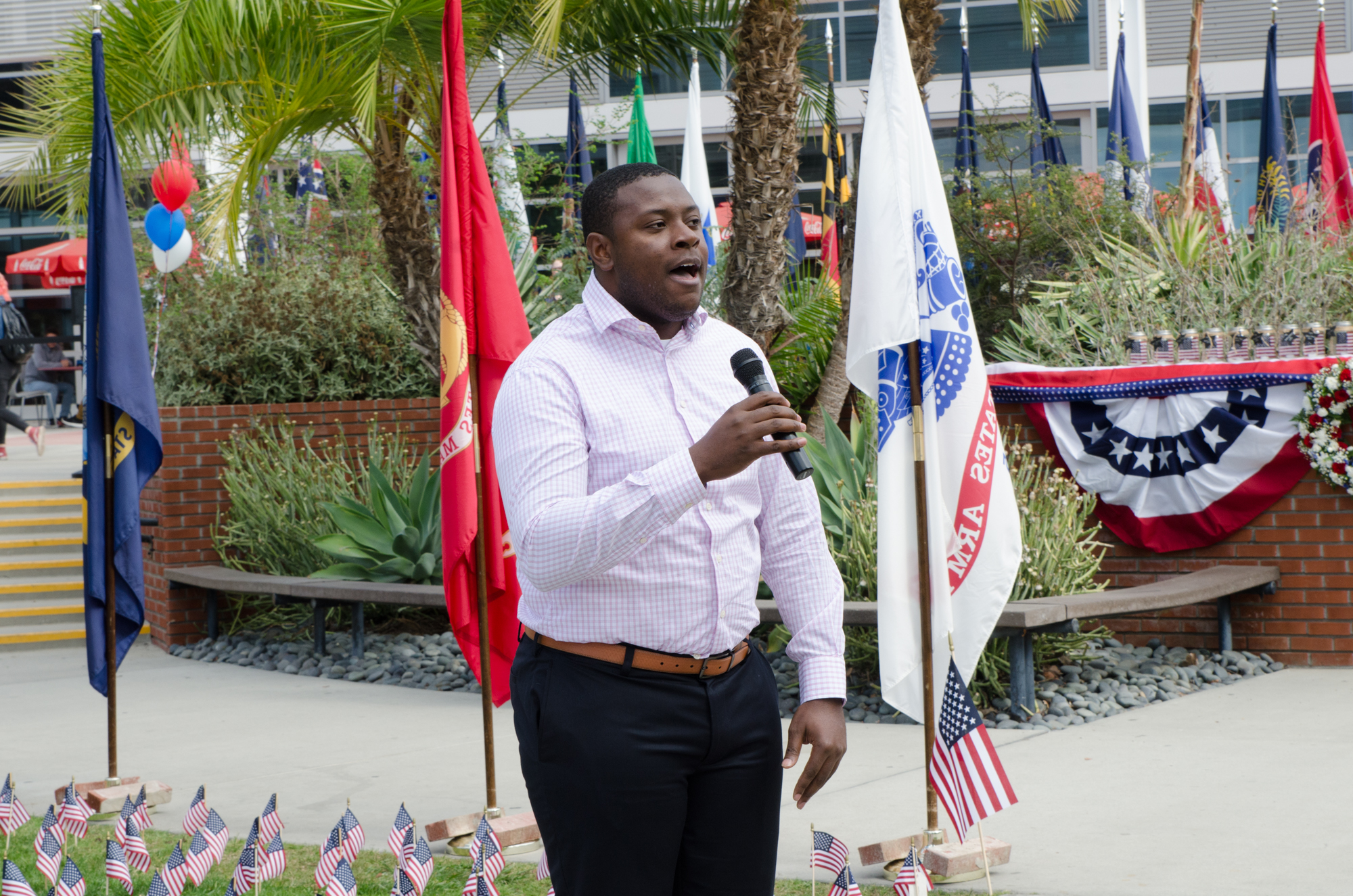 Horn, who served in the Marine Corps from 2005-09, said that she and her staff understand what veterans need when they arrive fresh out of the service.

“When you’re in the military, it’s like you have this home—you’re part of a team,” she said. “And when you get out of the military, there’s a sense of losing that. But at Palomar, we still have it. It’s like that home away from home outside the military. It’s because there is so much support, and we’re all about them.”

This year’s Student Veteran of the Year was also announced on Thursday: retired Navy Corpsman Alan Badel. Badel is studying public safety at Palomar and recently won a $1,000 scholarship from Phi Theta Kappa and the International Public Safety Leadership and Ethics Institute (IPSLEI).

Wrapping up the ceremony, Borrero ended his speech by quoting from Ronald Reagan’s 1981 Inaugural Address: “Freedom and the dignity of the individual have been more available and assured here than in any other place on Earth. The price for this freedom at times has been high, but we have never been unwilling to pay that price.”