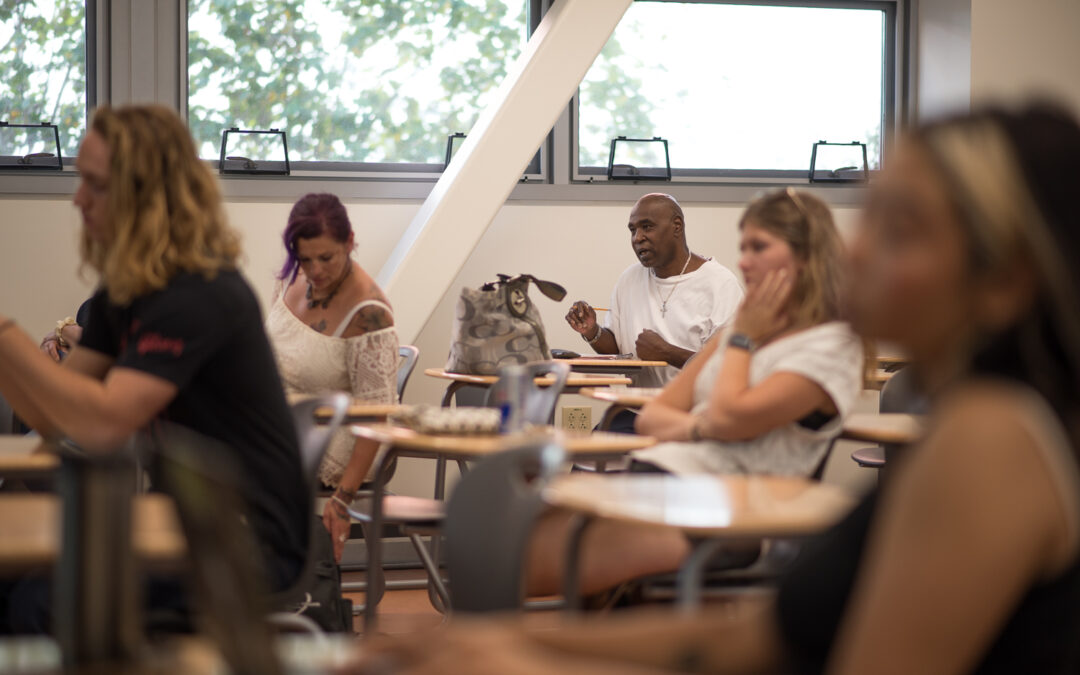 The Transitions program at Palomar College is helping to address a desperate need for addiction recovery workers in San Diego County.

SAN MARCOS — A thriving community of formerly incarcerated students at Palomar College is helping to address a severe regional shortage of addiction recovery counselors, as students who have overcome substance abuse enter the field certified and ready to help.

Known as Transitions, but soon to be renamed Rising Scholars, the program began in 2018 as a way to help students impacted by the Criminal Justice System reintegrate into society through higher education. Dr. Nora Kenney-Whitley, who oversees the program, estimated that at least 90 percent of the students in the program are pursuing certificates in Alcohol and Other Drug Studies (AODS) at Palomar.

“It’s the one space where people who have been justice-impacted can get a job—and where it can actually be a benefit. They don’t want someone who has never struggled with addiction telling people who are struggling with addiction what to do. They want people who have experienced it,” said Dr. Kenney-Whitley. “And many of our students want to give back.”

Professor Jim Fent, who teaches and coordinates the AODS program at Palomar, said the U.S. Occupational Outlook forecasts a 33 percent increase in the need for substance abuse counselors in the coming years.

“When I first started full-time here at Palomar in 2013, I used to have to call programs and urge them to take a student as an unpaid intern, and now I get emails from programs at least every other week saying, ‘Send us some people we can hire,’” Fent said.

He pointed out several factors that are driving the increased demand for trained professionals—chief of which is the opioid epidemic, recently magnified by the influx of fentanyl, a synthetic drug 50 to 100 times more powerful than morphine.

“Additionally, in 2019, Medi-Cal began paying for residential substance abuse treatment, whereas before they only paid for outpatient treatment,” he added. “That drove an increase in the need for counselors, as well.”

Today, Fent said, he no longer has trouble placing students. About 70 percent of his class, he estimated, are employed in the field as interns at any given time.

Aaron Priddy, who is still active in Transitions, now works for Crownview Co-Occurring Institute in Oceanside as a Discharge Planner. He said he worked his way up from an entry-level position to administration in just two years because of the intense need for workers in the field.

“I was well-suited, given my past experiences, and I still feel more equipped than those who come into the field without that experience of previous addiction,” said Priddy.

He added: “The main purpose in this field is to help other people. People coming in need to have a deep sense of purpose, and some experience that can be related verbally—that’s important. There’s a lot of opportunity for sharing your story. Hearing the personal experiences of others is often the thing that motivates these people to keep going.”

Christy Davis is another Transitions student who earned her AODS certificate at Palomar and has since worked in addiction recovery.

“I have always had the ability to attract either addicts themselves, or their significant others or children,” said Davis, who shared her own 18-month recovery process as a single mother in the 1990s.

Later, she said, “When I was staying home with my daughter, I nannied everybody’s children in my neighborhood—and a lot of those children came from homes with addiction, and a lot of domestic violence. I just knew my experiences and the way I had come out of all of that could be useful in some way. And everybody told me I’d be good at it.”

Davis went on: “A lot of these students have family members who were addicts, or they themselves are coming out of addiction and want to give back. They’re saying, ‘Somebody helped me, so I’m going to help somebody else.’”

In August 2022, the San Diego Workforce Partnership published a report focused on attracting and retaining behavioral health professionals. The report cited a severe shortage of certified professionals in the addiction recovery field, and estimated that some 18,500 new behavioral health workers will be needed in the region by 2027.

Nathan Fletcher, Chair of the San Diego County Board of Supervisors, wrote that his “single highest priority since taking office in 2019 has been behavioral health,” which he defined as “the intersection of mental health and addiction treatment.”

“I have witnessed the difficulties in hiring behavioral health workers as we took action to build a better way to deliver services and transform our behavioral health system,” wrote Fletcher, who called in his 2021 State of the County Address for renewed effort to train addiction recovery counselors, social workers, and other key professionals.

Dr. Kenney-Whitley said there are several reasons why Transitions students have found such strong traction within the AODS program at Palomar.

For starters, many of those in Transitions have previously struggled with substance abuse and addiction: “The two go hand-in-hand—the trauma, and coping with trauma through drugs and alcohol—and then, when you use drugs and alcohol, you’re usually going to end up in jail or prison.”