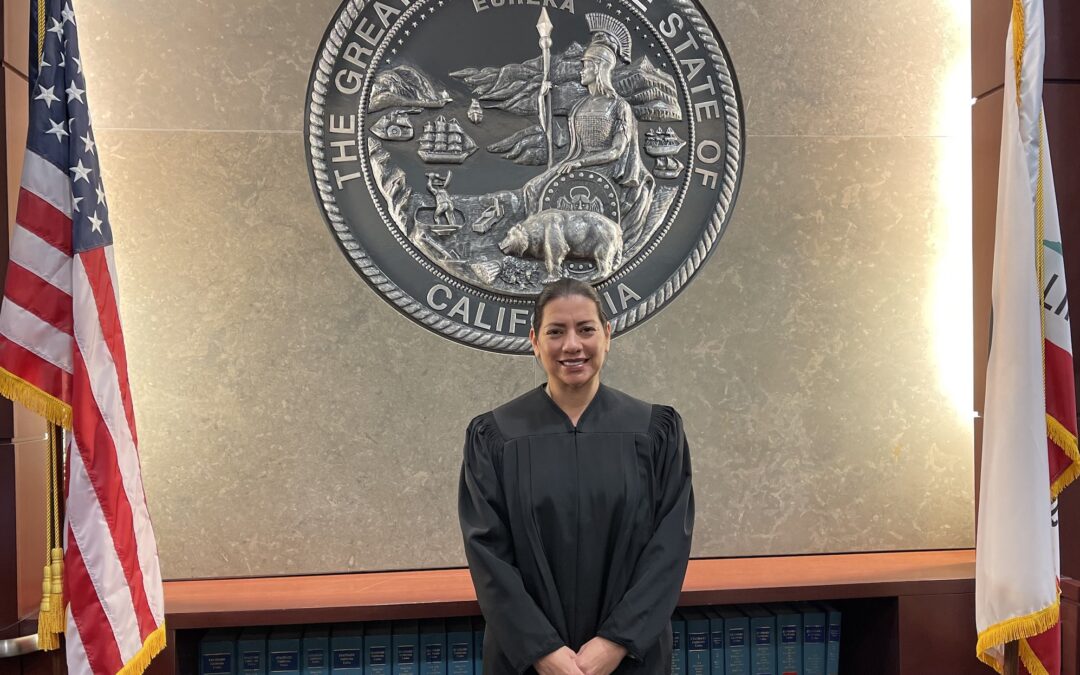 Marie Wood was appointed to the Riverside County Superior Court in September 2021, the latest move in a career that began with a knock on an office door at Palomar College.

SAN MARCOS — When Marie Wood was finishing high school, she took an aptitude test that determined she would make a good dentist.

But it wasn’t until she walked by the Paralegal Studies office at Palomar College and decided to knock on the door that her career as a lawyer—and now one of Riverside County’s newest judges—took its first turn.

The professor who answered, Angelo Corpora, was then the Director of Paralegal Studies, and by the end of their conversation, Wood had decided to switch her major. It set her on a trajectory that would lead, ultimately, to the bench.

“It takes a good starting place, to set that foundation, and then it takes good support to encourage everyone to pursue a higher education,” said Wood during a recent interview. “We need to know it’s doable. That’s what I received at Palomar.”

Born in Mexico, Wood came to California with her family when she was 12 and lived for several years in Ramona. As a teenager, she was offered a job as a receptionist at the office of her family’s immigration attorney in Rancho Bernardo.

“So I was exposed to the legal field behind the scenes, and I got to see the ins and outs of working in a law firm,” she recalled.

After graduating from Palomar in 2001 with an associate degree in Paralegal Studies, Wood earned her bachelor degree taking night classes, then went to work for a civil litigation law firm in Temecula. There she learned the finer points of business disputes, real estate contracts and other civil cases—and was exposed to the state’s judicial system.

And she kept climbing.

“I wanted to do more than only what a paralegal does,” Wood recalled. “In 2007, I started at Thomas Jefferson School of Law to become an attorney.”

Two years later she received her Juris Doctor degree, took the bar exam, earned her license in 2010 and became an attorney. In 2016, she was recruited by a prestigious law firm in Riverside, Reid & Hellyer, and she became a “shareholder” or partner at the firm in 2021—the first Hispanic woman to achieve that status in the firm, she said.

While pursuing her legal career, she returned to Palomar—this time at the other end of the classroom, as a member of the adjunct faculty.

“Marie was an exceptional adjunct professor and wonderful colleague, who taught for years in both the Paralegal Program and Legal Studies program,” said Palomar College Professor Jackie Martin. “Marie had a warm, collegial rapport with her fellow professors, and was an excellent role model, mentor, and advisor for her students.”

Wood recalled: “One of the best parts of teaching was being able to hear back from students telling me, ‘Thank you for the encouragement.’ That reassured me that the encouragement I received was put to good use and I was able to give it back to my students who went on to receive university degrees.”

But her journey was not yet complete. When she became a partner at Reid & Hellyer, Wood had already submitted her application to become a judge on the Riverside County Superior Court.

“Being a judge never crossed my mind until another judge planted that seed—he said, ‘Have you considered submitting your application?’ I had not at all,” Wood said. “In February, I became a shareholder of Reid & Hellyer, and by September I was a judge.”

On September 7, 2021, she was sworn in and took her place in the court, giving up her ability to practice law: “That was a bit weird, at first—I’ve been an attorney for so long and now I can’t practice law, I just decide cases,” she explained.

Wood now presides in the Limited Civil department at the Southwest Justice Center in Murrieta.

“Every step of my education helped me gain confidence and want more,” Wood said, remembering her journey from college to the courthouse. “I went to Palomar with the idea, I’m just going to earn my associate degree, that’s all I need. Once I achieved it, then it became, I could earn a bachelor degree, and why not? Once I was working as a paralegal, I had a discussion about law school with the attorney that I was working for and he said, ‘You should go,’ and that’s all it took!”

“I’ve always said I am a product of my community, and that’s why I worked so hard as a lawyer to give back to my community,” she went on. “Now I want to continue that as a judge.”