‘Rhinoceros’ takes the stage at Palomar 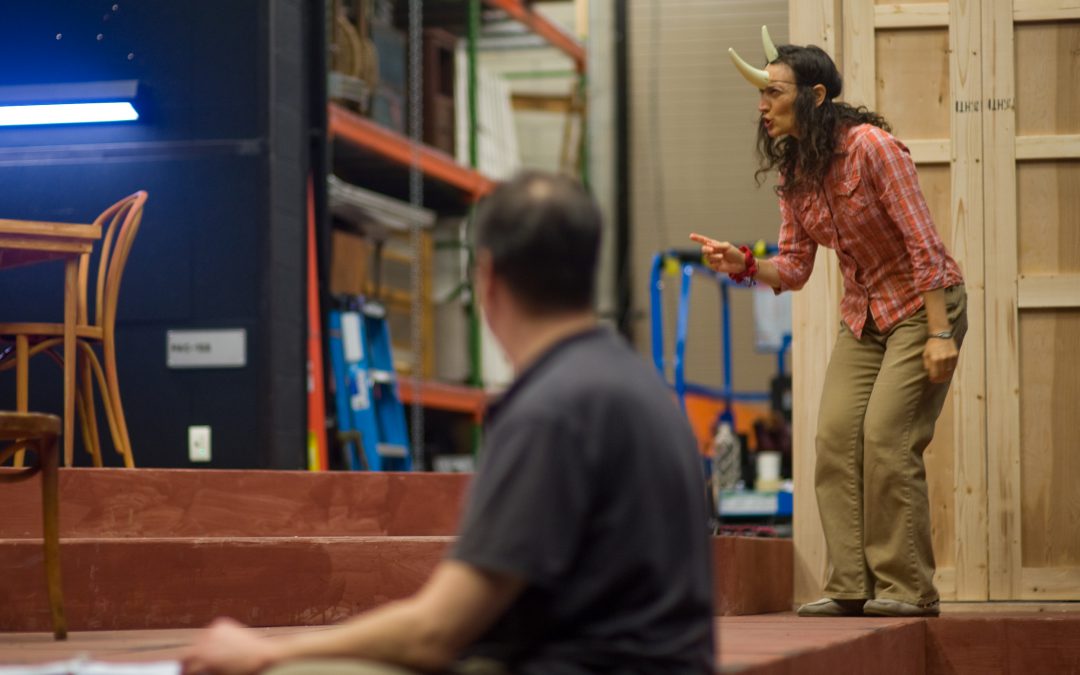 Set to open on Friday, Dec. 1, Eugène Ionesco’s avant-garde drama delivers food for thought in a season of turmoil similar to the playwright’s postwar life in Romania.

SAN MARCOS — On a quiet Saturday afternoon at Palomar College, Dori Sanchis and Nate Ritchey were rehearsing a scene from “Rhinoceros,” by the Romanian playwright Eugène Ionesco, in which one of the characters sprouts horns and turns into a rhino.

The scene is funny and bizarre—true to Ionesco, a member of the so-called “Theatre of the Absurd”—and director John Polak seemed delighted in how it was turning out.

“This is the type of routine I think you want to get in your body,” he told the actors while perched on a step at the edge of the stage. “It’s very difficult to memorize something like this.”

Polak, himself a long-time actor, said he chose the play because, even though it was written in 1959, it resonates with current events.

“Ultimately, I think the play is about conformity, the rights of the individual, and the community,” he added. 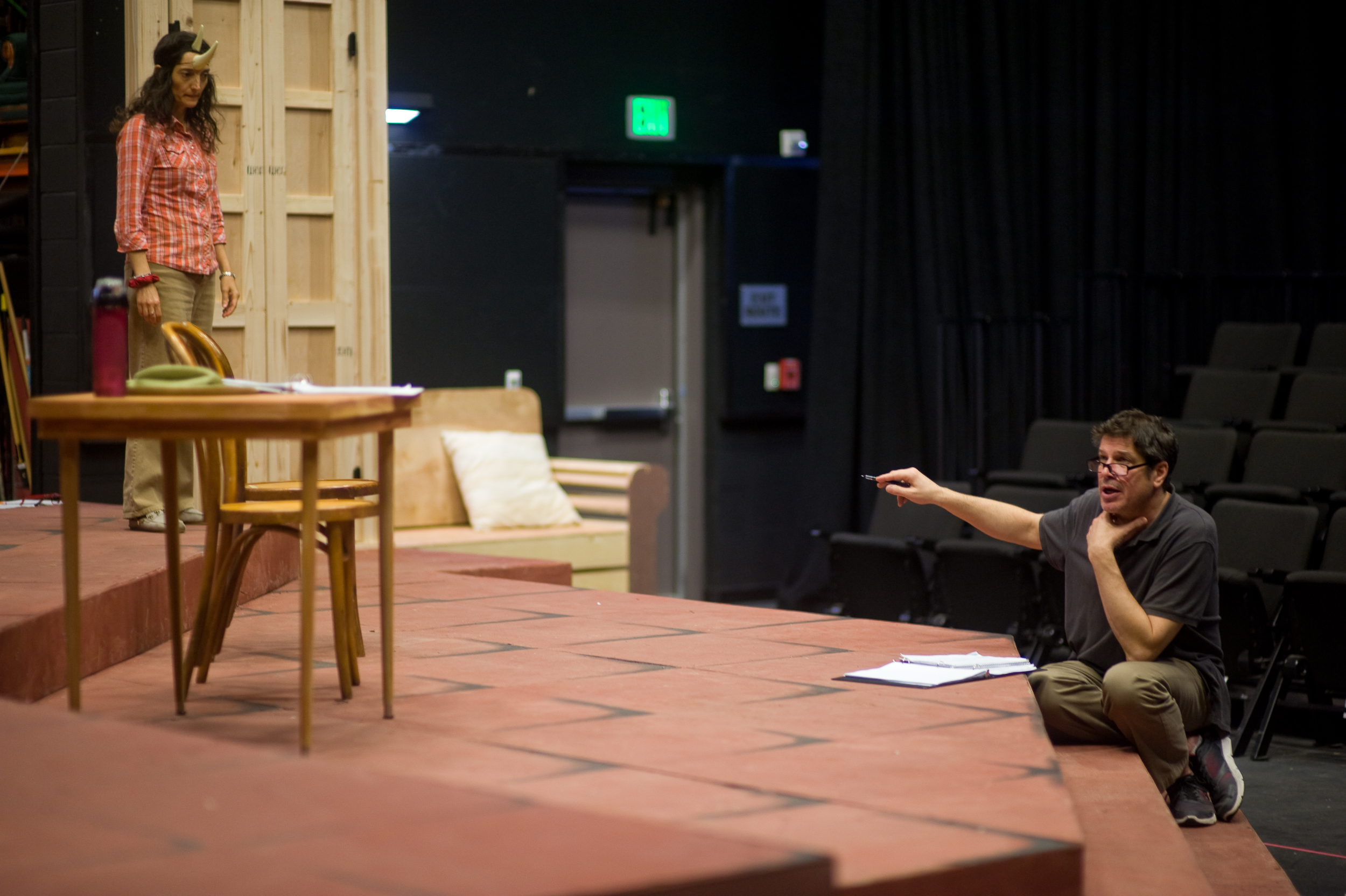 Opening Friday, Dec. 1 at the Studio Theatre, the show features a cast of 10 actors and 10 student crew members, plus faculty. All told, some 25 people will have helped bring “Rhinoceros” to the stage when the lights go up this weekend.

The show runs through Dec. 10 and tickets are available online.

For Sanchis, who plays a lead character named Jean, the production has been “very exciting and very challenging and very enjoyable, at the same time. John is a brilliant director, and a friend. And I’ve enjoyed working with all the other actors, as well.”

Austin Williams, who is double-cast as Dudard and a cafe proprietor in “Rhinoceros,” said Polak has challenged the cast to act with their bodies: “I’ve always been taught that to create a proper character, you want to meld that character’s inner dialog with your own,” said Williams. “John has been pushing us to create a physical embodiment of the characters, so that the character is created by your body language.”

Victoria Heather Fiore, who has been acting at Palomar for nearly 20 years, said that she had wanted to work with Polak, and “Rhinoceros” gave her the chance.

“When you have an actor directing, they understand your struggle,” said Fiore. “They’ve been on the opposite side of the table. He’ll say things that only an actor would get.”

Polak spent most of the recent Saturday rehearsal leaning forward or pacing as the actors went over their scenes. He is animated and passionate and is fascinated with the philosophy behind the play.

“It’s such a team effort, and I’m really proud of the ensemble and everybody’s contribution,” he said. “We have a very talented group of young Palomar theatre artists and I’ve been very inspired by what the students are doing.”

Set in a small French village, Ionesco’s play was intensely political when it debuted. Today, Polak said, the story resonates with people of a different culture who are grappling with similar themes. 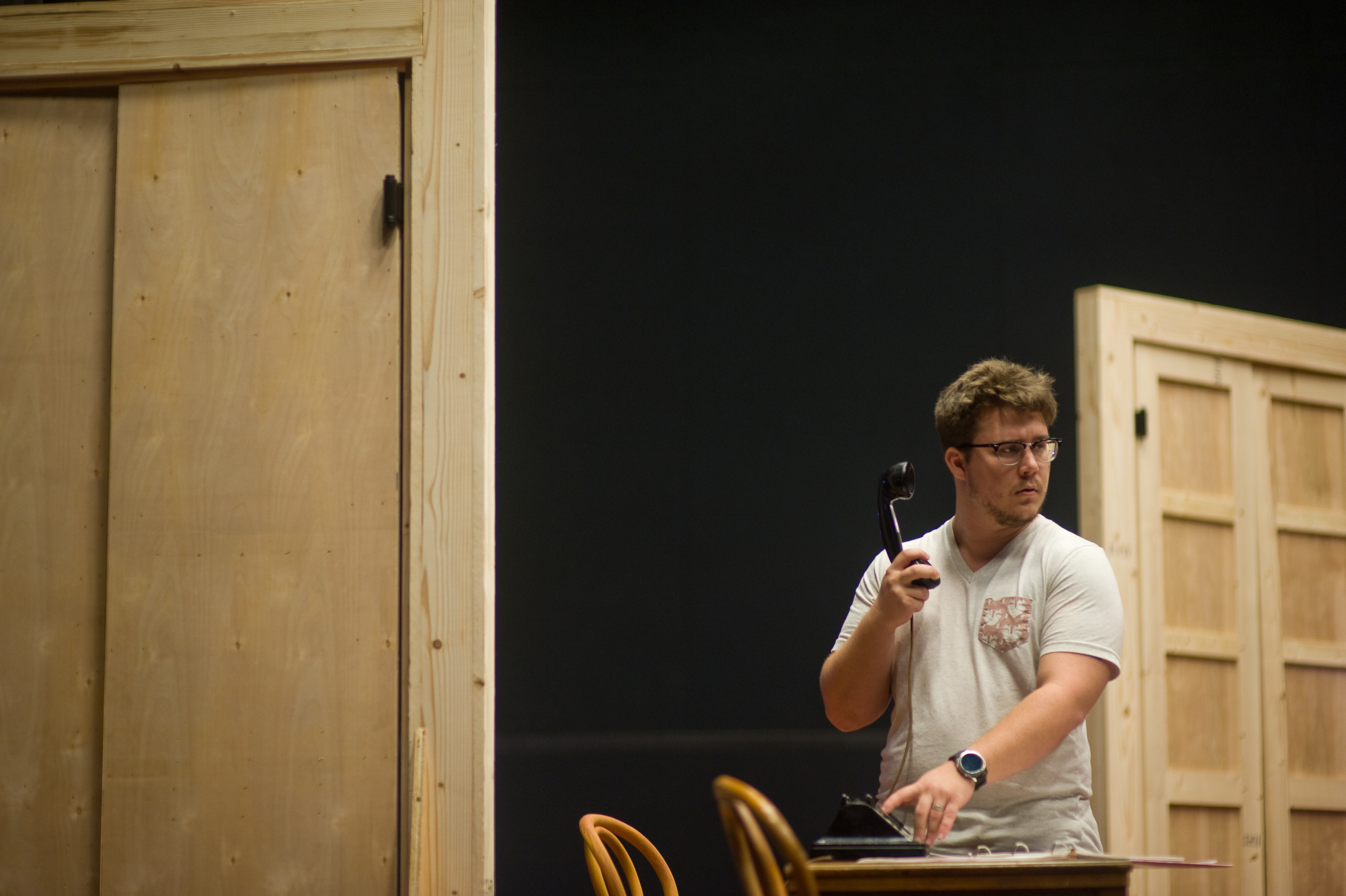 Nate Ritchey plays the role of Berenger in “Rhinoceros,” opening Dec. 1 at the Studio Theatre at Palomar College.

“When you start listening to the dialog and the conversations between the characters, there is a lot of deep meaning, and you don’t even notice, because he’s making you laugh at the same time,” added Sanchis. “I’d bet you if there are 99 people sitting here, each one is going to understand it in a different way. It’s very intelligent writing.”

Anthony Suraci, who also plays two roles in the production said that he loved the script when he first read it “because of all of the crazy, secret, hidden stuff in the text.”

“Palomar has left this great taste in my mouth, because I love the stuff we do,” Suraci said.

Fiore agreed: “Palomar always produces plays ahead of the times to meet a real-world issue that’s going on.”

For his part, Polak is looking forward to seeing how the story sits with Palomar’s audience: “It’s a provocative play. I love it when, after the show, the audience is more concerned with talking about the social issue than talking about how wonderful the cast was, you know? That’s what curtain calls are for. Hopefully the audience leaves the theatre having conversations with friends about what their rhinoceroses are.”