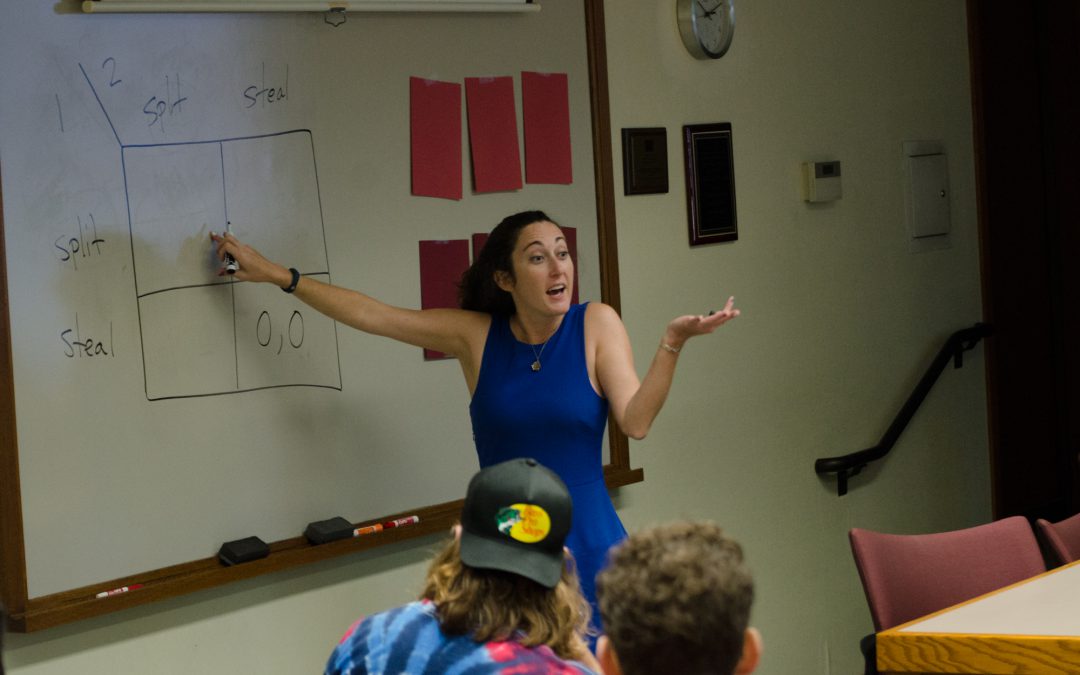 SAN MARCOS — In a darkened theater at Palomar College on Wednesday afternoon, 200 people gathered for a one-man show about an influential labor organizer in mid-20th-century San Francisco.

The following day in a packed lecture hall, at least 100 others turned up for a panel discussion entitled, “What is Whiteness?”

Elsewhere, attendees were learning about climate change, globalization, civil unrest, and the history of kneeling as a social statement.

Across campus on Wednesday and Thursday, Oct. 25-26, presenters from a variety of institutions and backgrounds engaged students on politics, economics and social issues. It was the latest in a popular lecture series hosted by Palomar faculty and known as Political Economy Days. 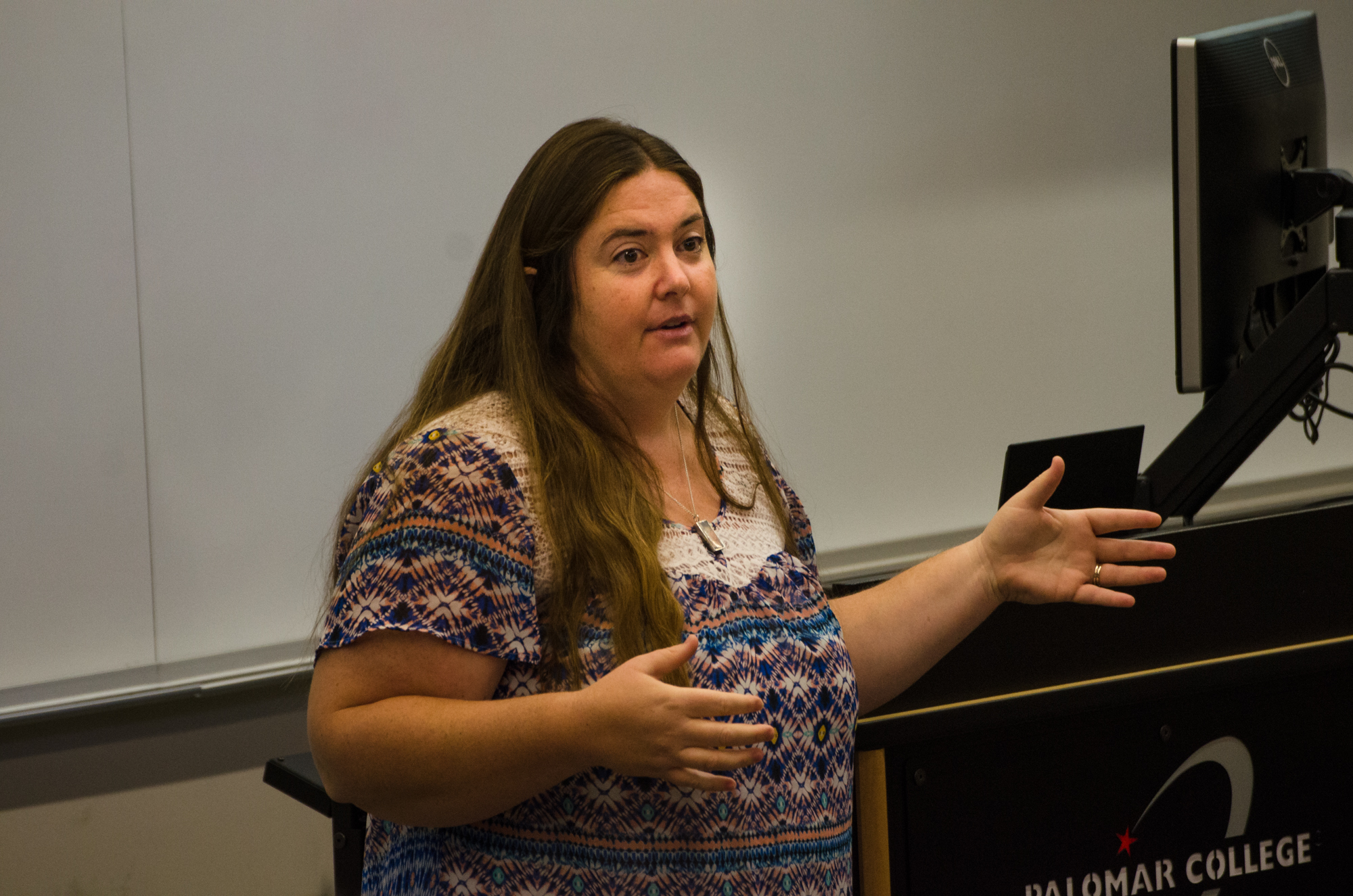 Now in its 13th year, the series this semester covered a host of topics ripped from the headlines, as organizers again scheduled forums to give students fresh takes, deeper insight and broader perspective on issues they encounter in the news and in the classroom.

“We have people who come each semester—repeat presenters, experts from local universities,” said Teresa Laughlin, who teaches Economics at Palomar and helped coordinate the event. “It’s been a really wonderful experience to be part of it.”

Laughlin said part of the objective is to give faculty members the opportunity to showcase research they may not always be able to incorporate into their classes.

“We are all specialists, but we have to teach at kind of a general level,” she said. “So here’s an opportunity for students to see experts lecturing in their expertise.”

Peter Bowman, who teaches Political Science at Palomar and helped launch the series in 2005, explained that the lectures expose students to research methods and critical thinking, “not just the punditry that we hear from the talking heads.”

“They get these academic, professorial takes on current issues, whether it be immigration, or healthcare, or climate change,” said Bowman. “Certainly, in the Trump era, it’s valuable for students to see these relevant, germane topics come to life.” 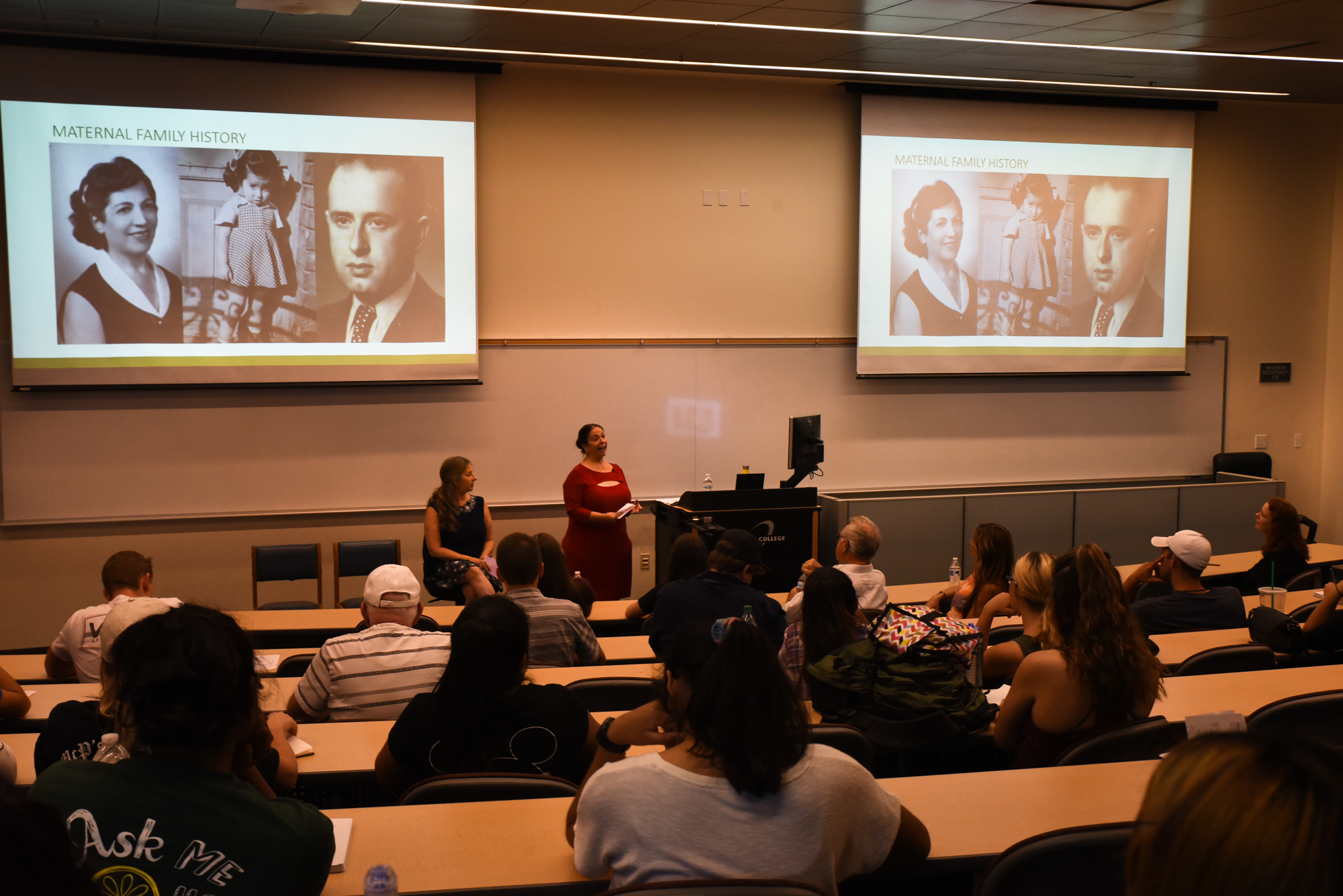 Suzanne Szames and Deborah Walsh discuss their family’s experience during the Holocaust. Photo by Melinda Finn.

The presentations were held in various locations around campus, including the Howard Brubeck Theater and the Governing Board meeting room. Throughout the series, student turnout was high.

“The support we get both from administration and other faculty is wonderful,” said Bowman. “It’s always encouraging to see MD-157, which is a really large lecture hall, pretty much filled for every talk.”

Actor Ian Ruskin held the stage at the Brubeck for an hour and a half Wednesday afternoon, performing his one-man show, “From Wharf Rats to Lords of the Docks.”

In character as Harry Bridges, an Australian labor organizer who led the formation of the International Longshore and Warehouse Union (ILWU), Ruskin brought to life not only his subject, but the drama of the labor movement itself.

Laughlin said it was a brilliant way for students to learn about a topic that often fades into names, numbers and acronyms across the distance of time. 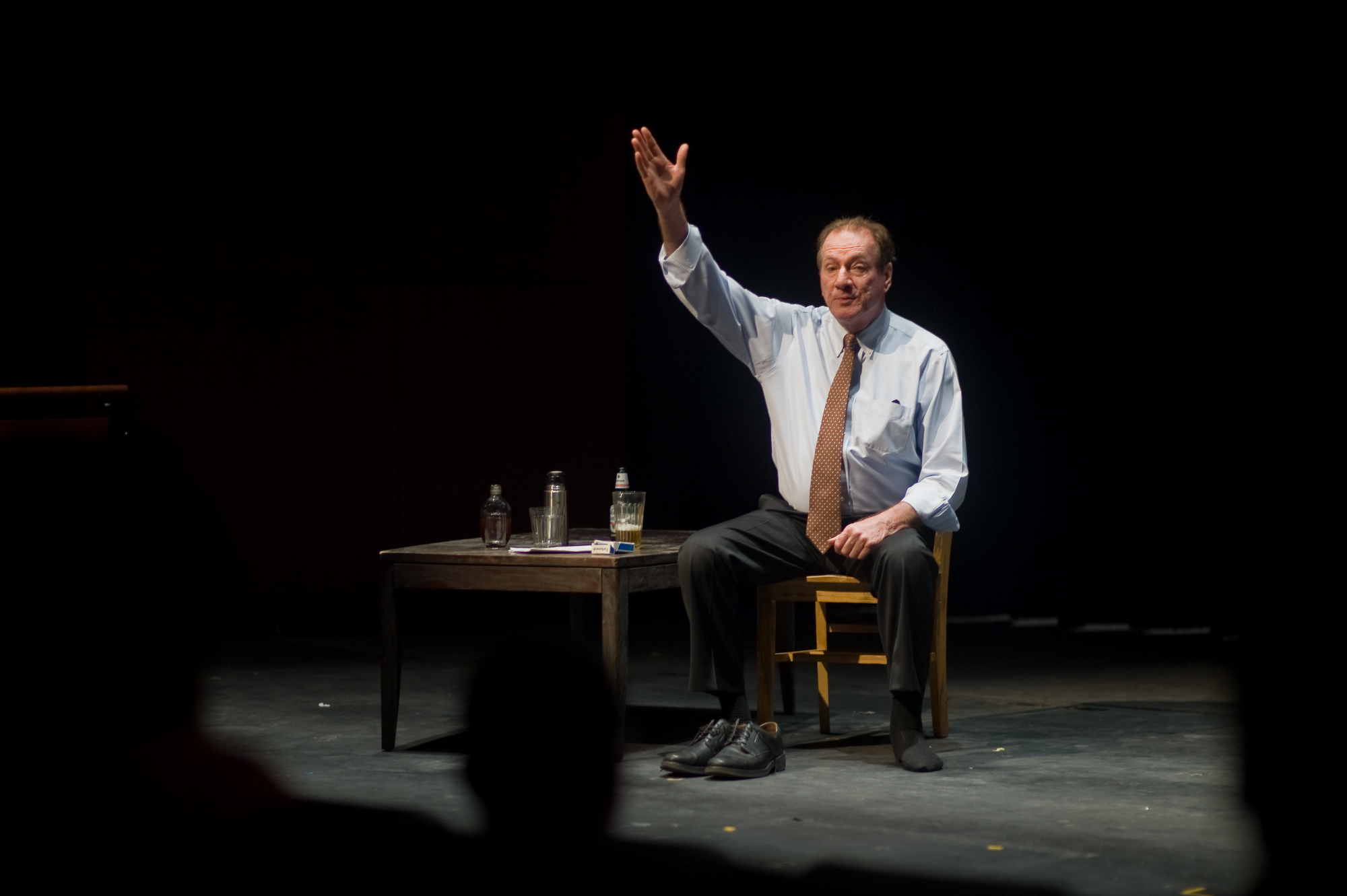 Actor Ian Ruskin during his one-man show, “From Wharf Rats to Lords of the Docks.” Photo by Tom Pfingsten.

“A strike is a like a revolution—it’s a last resort,” Ruskin said during the performance, channeling his charismatic subject. “Wharf rats they called us, and that’s what we were, running around the docks trying to find a few pieces of work. You might work two hours, eight hours, 24 hours, 36 hours straight. And if you didn’t like it, you could go to hell. There were any number of reasons you could go to hell.

“I’ve seen men go home with their feet bleeding, seen them drop dead on the job,” he went on. “I’ve seen old men trying to keep up with the young men because they had no pension, they had nothing.”

Bridges eventually organized San Francisco’s dock workers, a movement that galvanized into a historic four-day general strike encompassing 64 unions in the Bay Area: “We went out on strike as wharf rats, but we came back as lords of the docks.”

The ILWU was formed in 1937 and now includes more than 33,000 workers on the West Coast, Hawaii, Alaska, and British Columbia.

After Ruskin’s performance, students had questions about unions and Bridges, whom Ruskin had convincingly brought to life.

As a Royal Academy-trained actor, Ruskin, of Culver City, estimated that he has performed the Bridges show at least 250 times.

He said he wants his audience “to realize that these people were real, flesh-and-blood guys. There’s obviously information in the play, but just the fact that men struggled the way they did” brings the history to life.

Exploring the essence of whiteness

In a very different type of presentation on Thursday, four of Palomar’s English and Humanities faculty shared a panel on the topic, “What is Whiteness?”

“In many ways, it originated here in the New World,” explained English Professor Martin Japtok, presenting an overview of the concept of racial identity and power dynamics in the Americas. “It’s a process, in a sense, that began with Columbus. Whiteness was a shared identity of Europeans in the Caribbean—being white came to mean not being black and not being Native American.” 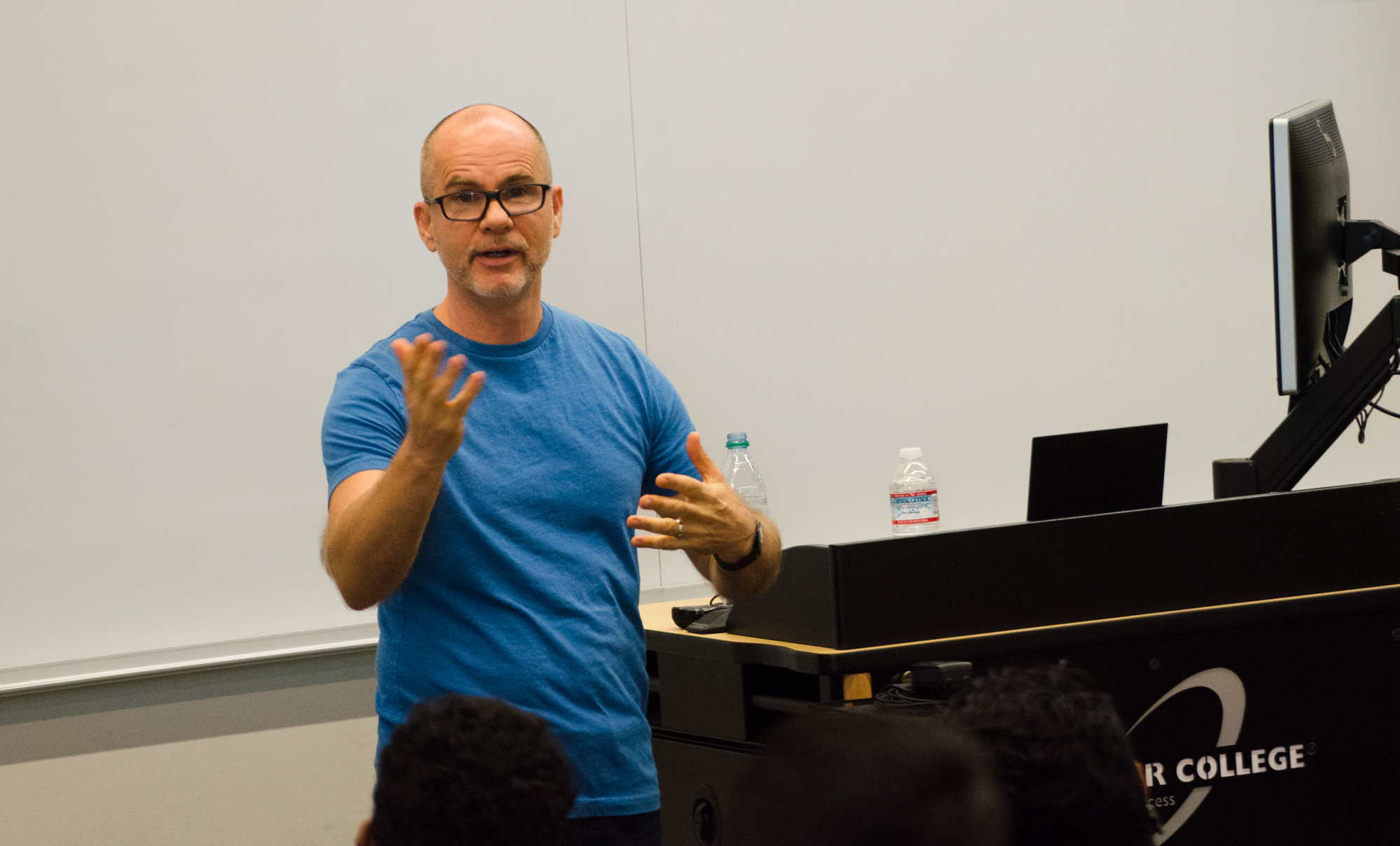 English Professor Clare Rolens walked students through the 1896 Plessy v. Ferguson case, in which the Supreme Court upheld racial segregation laws and the concept of “separate but equal.”

“Whiteness, undoubtedly, was a legal category for most of U.S. history,” Rolens explained. “It worked as a tool of exclusion. It was invented to exclude. All of a sudden, being white is incredibly valuable.”

Barbara Neault Kelber, Chair of the English Department at Palomar, discussed the rise of white nationalism, specifically the rally that preceded the violence in Charlottesville in August, in which men carrying torches chanted, “Blood and soil.”

“That’s Nazi talk,” said Kelber. “It’s always about power—people don’t want to give up their power.”

Before dismissing the students, Literature Professor Abbie Cory engaged them in a white privilege survey, to which several responded by voicing surprise and empathy.

“You don’t have race without racism, and there’s no racism without race,” Japtok said.

Marquesa Cook-Whearty, Communications, who kicked off Political Economy Days with her Wednesday morning session, “#takeaknee: A Visual History of Kneeling as Rhetoric”