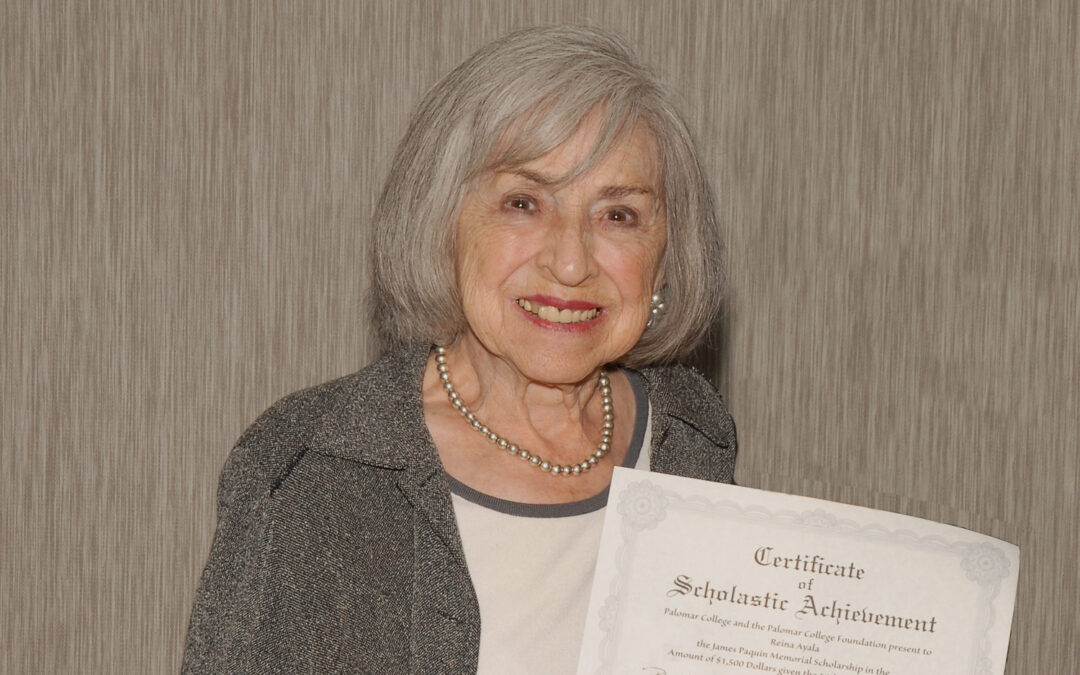 The long-time supporter’s family donated $20,000 to establish the scholarship, which will pay tribute to Paquin’s steadfast support in her final years.

SAN MARCOS — Emma Paquin came to Palomar College late in life, and not as a student.

Instead, the long-time educator and mother of five became part of the Palomar community as a supporter of the Palomar College Foundation, contributing nearly $250,000 over the years and establishing a scholarship in the name of her late husband, James H. Paquin.

Now Emma Paquin, who passed away in 2020, will be remembered with an endowed scholarship of her own, following a $20,000 contribution by her family to establish the scholarship fund.

“We were so humbled and grateful for Emma’s support while she was alive, and we are honored to remember her with an annual scholarship that will help our students pursue their dreams in the years to come,” said Stacy Rungaitis, Executive Director of the Palomar College Foundation.

“Emma Paquin’s generosity has already touched hundreds of lives, and will continue to make a positive difference for our students for the foreseeable future,” said Dr. Rivera-Lacey.

“She very much supported education, and throughout the years she learned a lot about Palomar,” said Hartwell. “She loved everything about Palomar, and she helped us with scholarships and textbook assistance.”

“Palomar made such an impact on Emma, she would talk about the Foundation and the college to her family all the time,” Hartwell added. “So when she passed away, her family contacted us to say they wanted to set up a scholarship in Emma’s name.”

Paquin’s daughter, Nancy Johnston, confirmed Paquin’s enthusiasm for the college: “She told me so many times over the last 10 years that establishing the scholarship in my father’s name was the best thing she ever did in her life,” said Johnston.

“She graduated from Little Rock High School before it was integrated,” she recalled. “It was a very conservative upbringing, and yet, after she became a mother of five, she went back to school at Pasadena City College, and the junior college experience was really what helped her get her education.”

Paquin would go on to earn a master’s degree in education and work as a teacher. She lived to the age of 97, and is survived by her five children, eight grandchildren and eight great-grandchildren.

In addition to the two memorial scholarships, the Paquins will be honored with the dedication of a room in the Library/LRC at Palomar’s San Marcos campus.

“If anybody deserves to be highlighted in the Palomar community, it’s her,” said Hartwell. “She made a difference in many students’ lives.”