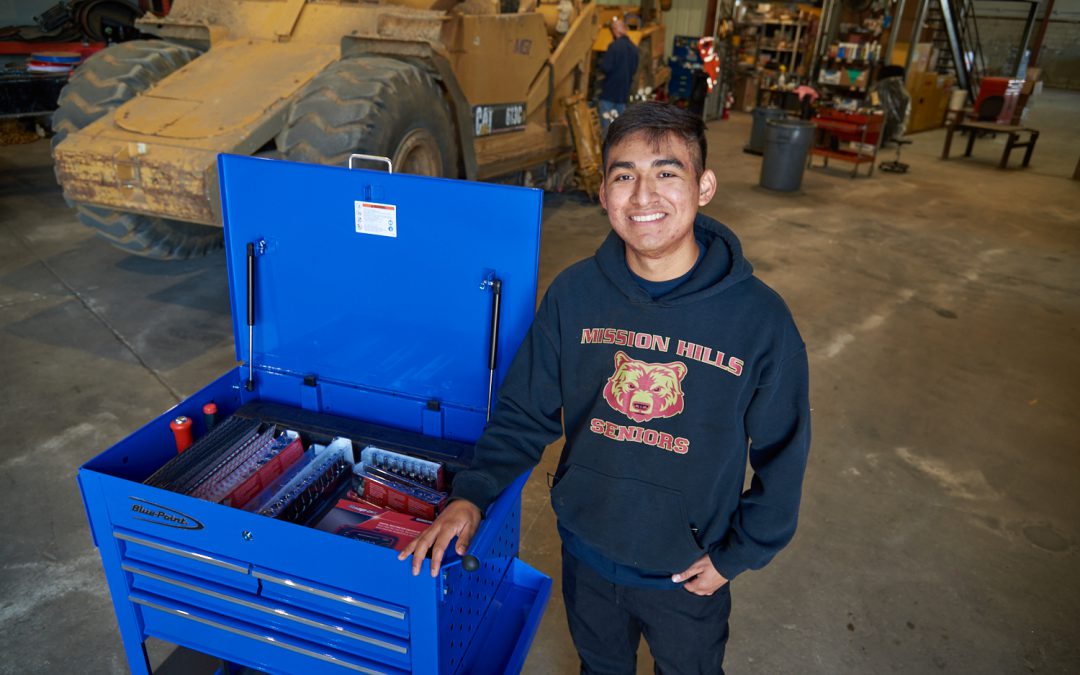 The college has partnered with Project Cornerstone to supply deserving students with the hand tools necessary to enter the local job market.

ESCONDIDO — During his second day on the job, Orlando Perez, a student in the Diesel Technology program at Palomar College, wheeled a brand new mechanic’s toolbox through a cavernous bay at Marathon General, Inc.

He had just received the toolbox and its contents—some $3,900 worth of mechanic’s necessities—as part of a joint venture by Project Cornerstone, a local nonprofit, and Palomar College. To help facilitate this program, Snap-On Tools contributed by providing the tools at a significant discount to Project Cornerstone.

Marathon General (MGI) is a general contracting company that has been building roads and other infrastructure in the region for 30 years, and hired Perez to join the mechanical team that keeps its fleet of heavy machinery running. 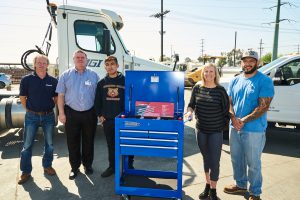 “Certain industries require their employees to have equipment before they can come to work, and diesel technology is one of them,” explained Bruce Reaves, a Job Developer and Case Manager at Palomar. “We have students at the community college with no way to buy the thousands of dollars of tools that they need.”

Crystal Howard, Executive Director of Project Cornerstone, said that her organization is dedicated to workforce development in the area, and that it paid for Perez’s toolset with a grant from San Diego County’s Neighborhood Reinvestment Program.

“Most of the employees in the construction industry are reaching the age of retirement, and there’s a lack of young workers coming into the workforce. Mechanics are one of the highest-need, hardest to fill positions,” said Howard.

For many students who are interested in becoming mechanics, being provided with a set of tools makes it possible to launch a career and “get their hands dirty” sooner than they would otherwise.

“The first day, yesterday, I was borrowing tools. But it’s all right there now,” he said, gesturing to his bright blue toolbox, “and it’s really going to come in handy.”

“There’s a lot of learning, to be honest,” Perez added. “The guys are all pretty cool and open to showing me how stuff works in the shop.”

A resident of Vista, Perez will earn his Associate Degree in Diesel Technology in December. He started in the program in the fall of 2018 after a childhood spent watching his father work as an auto mechanic.

“Ever since I was a kid, I’d see him wrenching every day in his shop. Here, everything’s bigger,” he said. “I want to get my foot in the door and get work experience. I already have two years at Palomar, and I’m almost done. I saw this scholarship opportunity and said, ‘You know what? I’ll take it.’”

Steve Gallant, Vice President of Marathon General, said that the company’s fleet of equipment is serviced both in its Escondido shop, where Perez is now a Fleet Mechanic, and in the field.

“All of our guys come in with their own tools,” said Gallant. “Orlando is young and ambitious—two good qualities—and this is a good opportunity for us to bring somebody in, and train him for the future.”

Howard said her organization is essentially trying to provide an incentive to promising students to jump into an industry in need of skilled mechanics.

“How is a student going to come up with thousands of dollars to buy tools? And it helps the industry by helping connect them to skilled labor. We’re looking for a consistent, sustainable pipeline of workers,” she said.

Reaves helped coordinate Palomar’s end of the partnership by creating an application process to identify the most deserving students.

“This program is helping students who have worked hard to get into the field right away, without having to figure out how to finance thousands of dollars of equipment before they get to work,” said Reaves.