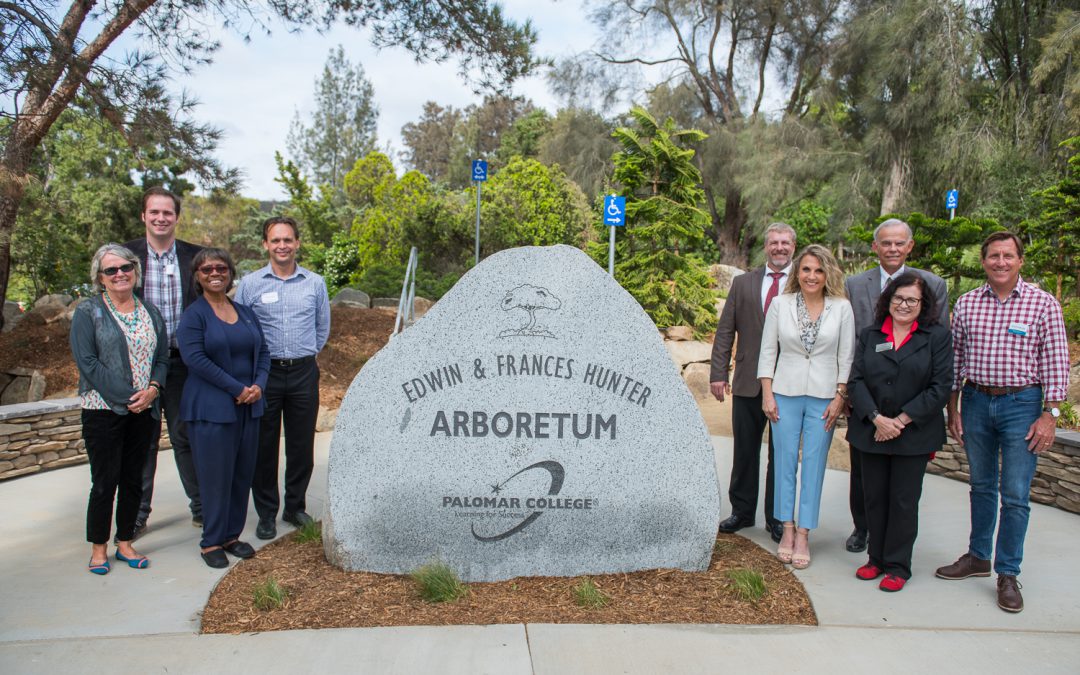 During six months of renovations, the college built ADA-compliant trails, upgraded irrigation systems, and installed a new groundwater well at the Edwin & Frances Hunter Arboretum on the San Marcos campus.

SAN MARCOS, CA ― In a dedication ceremony for the newly renovated Edwin & Frances Hunter Arboretum on Thursday, Sept. 26, 2019, Palomar College welcomed more than 150 guests to tour the new trails and enjoy one of the city’s beautiful nature preserves.

The arboretum had been closed since March, when crews began building ADA-compliant pathways, installing new irrigation and moving rocks and boulders sourced on site to create the natural retaining walls that now crisscross the 10-acre preserve. More than 600 species of trees and shrubs, including numerous threatened and endangered species, are found within what has been hailed as a unique campus treasure.

“Since it was created 45 years ago, this arboretum has given countless students and others in our community a place to enjoy the beauty of our natural environment,” said Dr. Joi Lin Blake, Superintendent/President at Palomar College. “We’re proud to take this labor of love a step further and unveil the upgrades that have long been envisioned for our guests to enjoy this stunning collection of trees and plants.”

Along with a host of public officials, the ceremony was attended by members of the Hunter family and Hunter Industries, which donated $500,000 to the Palomar College Foundation in 2015 to establish an endowment ensuring the maintenance of the arboretum in perpetuity.

According to Tony Rangel, the Grounds Services Supervisor at Palomar, improvements included a trail network in the lower half of the arboretum that enables visitors to enjoy the preserve on ADA-compliant paths. Crews also relocated the entrance and installed a large stone monument with the Edwin & Frances Hunter name. All capital improvements were funded by Prop. M, the $694 million bond measure approved by voters in 2006.