Academy recruit has served with Palomar Police since 2006 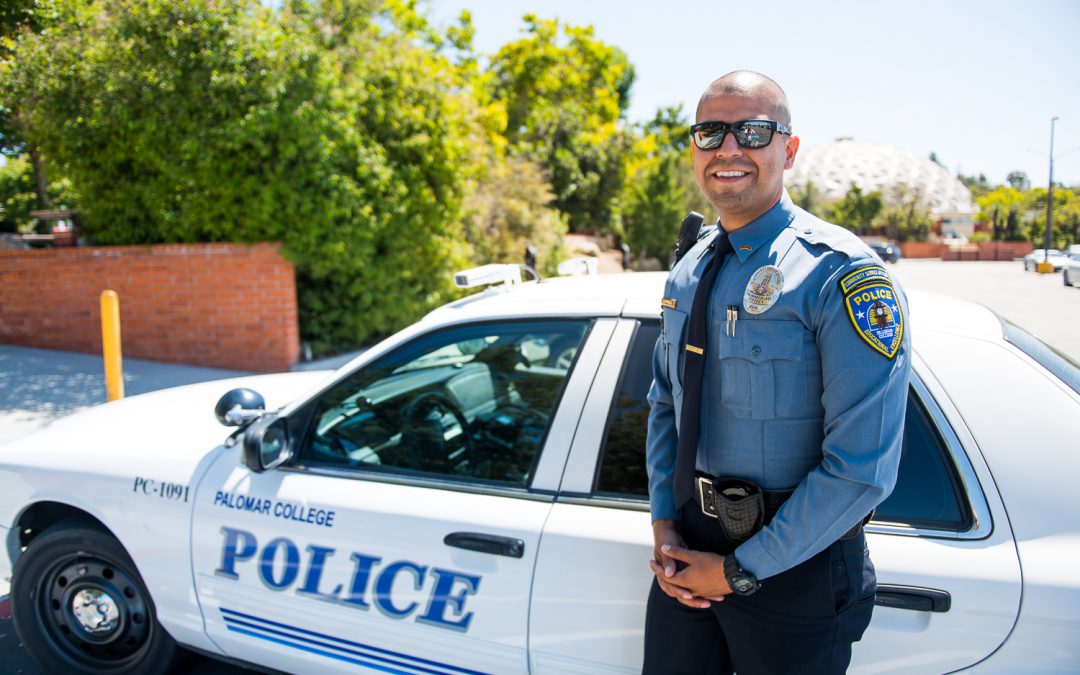 “Palomar made it possible for me to fulfill my dream of serving in law enforcement.”

Within the year, he was manning the radio as a part-time dispatcher for the Palomar College Police Department (PCPD). Now 32 years old, Montes has been employed at the college ever since, and in January recently became a Palomar student again when he entered the year-long Police Academy.

“All of my skills, everything I have, is because of Palomar College—my education, the mentoring my supervisors have given me,” he said during an interview on campus. “They trained me here as a dispatcher—I learned to multi-task, I learned to prioritize calls.”

Montes worked the graveyard shift as a dispatcher for six years while finishing his undergraduate education. After graduating from Palomar in 2011, he transferred to San Diego State University and earned his B.A. in Criminal Justice in 2014.

In 2012, he was promoted to full-time work at Palomar and became a paid Community Service Officer (CSO). Today, he is one of three Lead CSOs—a supervisory position—but Montes is not a “sworn” officer of the PCPD, the law enforcement department at the San Marcos campus, as well as the education centers in Escondido, Rancho Bernardo and Fallbrook.

Sworn PCPD officers have complete police authority, can make arrests and traffic stops as necessary, and serve as first responders for all campus emergencies. Along with about a dozen sworn officers, PCPD has about 30 CSOs, who provide safety escorts, enforce college parking regulations, unlock vehicles when students lock their keys in their car, and patrol campus.

Montes described CSOs as the “eyes and ears” of the department. When they witness a crime in progress, they call it in with a description of the suspect, the nature of the crime and a location. Then, according to protocol, a sworn officer with the authority to detain follows up.

In the Palomar force, Montes has recently been in leadership training, and he said he plans to pursue his Master’s Degree in Law Enforcement Leadership.

“Jesus Montes is one of the greatest human beings I know,” said Palomar College Chief of Police Chris Moore. “He is an ethical person who truly represents the best of Palomar College.”

After he completes the Palomar College Police Academy in December, he said, “My goal is to get hired wherever they’ll take me—if it’s here, perfect, because pretty much half of my life has been here.”

Indeed, Montes has experienced the college from virtually every perspective—as a student, a police dispatcher, a volunteer CSO and a full-time employee. He said he is grateful for the opportunity to have spent so much time on campus.

“Palomar made it possible for me to fulfill my dream of serving in law enforcement,” said Montes.