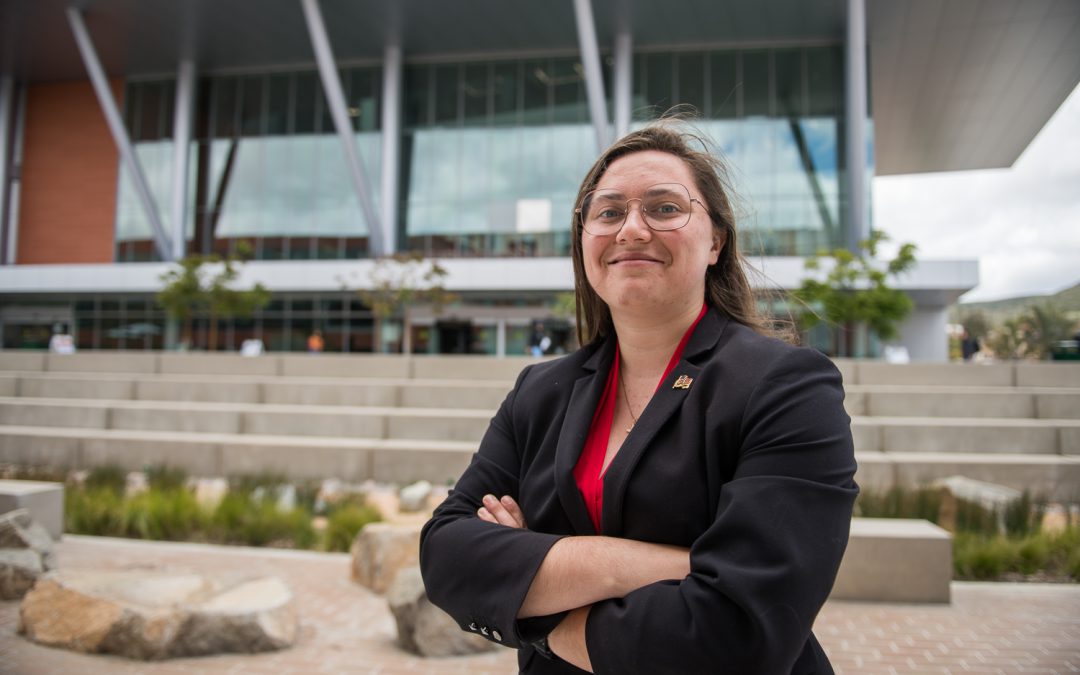 Kena Haun grew up on a farm in Southern Indiana and never went to high school. She came to Palomar in 2017, graduated last month with a 4.0 grade-point average, and will transfer to UC Berkeley this fall.

SAN MARCOS — It was a cold day in Palmyra, Ind. when Kena Haun packed her car and left her family’s farm to head west and start her life in higher education at Palomar College—a life that had seemed increasingly unlikely as the years went by.

Now 22, Haun grew up on a farm with more than 50 horses and 100 sheep. Instead of attending high school, she spent her days feeding and caring for animals, giving horseback riding lessons, mending fences and, during the heat of the summer, loading bales of hay.

“I was running the entire operation by the time I was 15,” she recalled. “I woke up every day at 6 a.m., fed myself then everything else, then I went to work.”

She would have jumped at the opportunity to attend high school, but settled for a GED instead: “If I had been able to stay in school, I would have been at the top of my class,” she said. “It’s where I was at the time. I probably would have had access to scholarships and educational opportunities that I lost, having to return home.”

When she looked into enrolling at her local community college, she hit a devastating roadblock: The college wanted her to take loads of remedial classes to make up for the high school she’d missed. It seemed completely impossible, she said.

Then she spoke with a relative named Heidi Phelps from California. Phelps is an adjunct professor at Palomar, and she told Haun she was sure that Palomar could help her get started in higher education.

Two days later, after a flurry of phone calls to Palomar counselors and her extended family in Escondido, Haun left Indiana and drove three days straight—2,256 miles, to be exact—to make the beginning of the Spring 2017 semester.

“After I discovered Palomar, pursuing a degree became something that was definitely possible,” she said. “I’m not a full-time farmer anymore. I can just be a student for once in my life.”

Haun said that one of her first classes at Palomar, Introduction to Philosophy, challenged her to think differently: “The way I was being engaged with my mind, that had never really happened to me before, and I wanted more.”

When it was time to choose a major and send out university applications, she chose Philosophy, and applied to the University of California, Berkeley.

“Kena wholeheartedly threw herself in to all that Palomar has to offer, and the reward was the development of a skilled thinker and community leader,” said Jeff Epstein, a Philosophy Professor at Palomar who worked closely with Haun. “She will be missed, but I am consoled by the fact that one of our great talents is headed to U.C. Berkeley, which will benefit from her energies and talent as much as we have.”

Haun has been a full-time student since the first time she set foot on Palomar College in January 2017. She was also placed in a work-study job here in the Behavioral Sciences Department, competed with the award-winning Speech & Debate Team, and served as the Vice President of Legislative Affairs with the Associated Student Government at Palomar.

On Friday, May 24, Haun graduated with a 4.0 GPA. Her father was in the crowd, and afterward they visited Berkeley together.

“Palomar made a lot of things possible for me,” said Haun. “Palomar made it possible to have hope in education, which is something I didn’t have before. It just never seemed obtainable.”

Plus, she said, after growing up wearing boots, jeans and T-shirts, “I am so comfortable in a pantsuit now.”