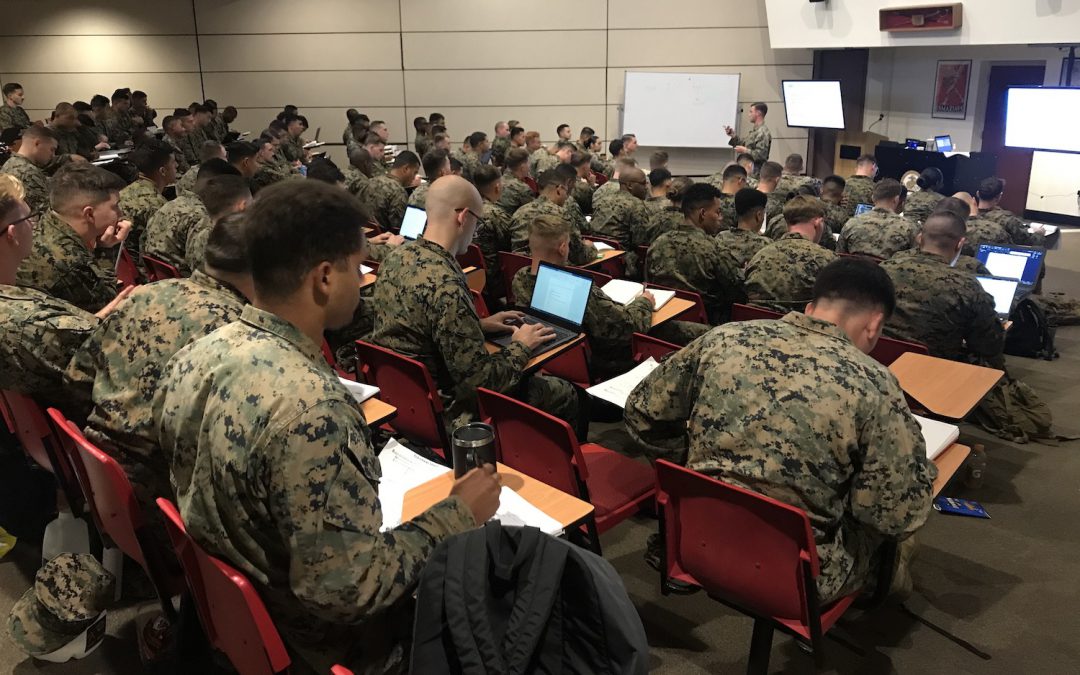 With final approval from the state Chancellor’s Office, Marines in leadership training will be able to articulate their five-week classroom experience and on-the-job training into Palomar College credit.

SAN MARCOS — An innovative new program providing Palomar College course credit to Marines enrolled in the U.S. Marine Corps Sergeant School at Camp Pendleton and Twentynine Palms has cleared its last major hurdle and is set to launch in the upcoming Fall semester.

“The program is now fully approved, and we have the green light to launch this fall,” said Nichol Roe, Acting Dean for Math, Science & Engineering at Palomar. “We’re going to get started at Camp Pendleton, and then likely launch at Twentynine Palms in the spring.”

The program will translate the coursework of Marines in Sergeant School into 12 units of Palomar credit, followed by 2,000 on-the-job training hours once they return to their Military Occupation Specialty (MOS). Another six units of credit will be awarded for the on-the-job training hours, resulting in a Certificate of Achievement in Military Leadership from Palomar College.

If participants choose to fulfill the general education requirements, they will also be eligible for an Associate of Science in Military Leadership.

Additionally, the Marines who finish the program will receive a Certificate of Completion from the California Division of Apprenticeship Standards as journey-level General Operation Managers.

“Palomar College serves thousands of veterans, active-duty service members and dependents, and this is yet another way we are supporting those who are engaged in ongoing learning and furthering their careers,” said Interim Superintendent/President Dr. Jack Kahn. “We’re very excited to see where this program will take us in our thriving partnership with Camp Pendleton.”

The grant includes support for college staffing and counseling for Marines in training, as well as internet hot spots and laptop carts for classrooms at Camp Pendleton and Twentynine Palms.

Thanks to the CAI grant and the Marine Corps, which is providing the classroom space and instructors, the program will be provided to trainees at no cost, and with minimal effect on the Sergeant School experience, other than logging on-the-job hours, Roe explained.

“We’ll have an orientation where these students get to meet Palomar College counselors, Palomar faculty and staff, to learn about the program and get enrolled,” she said. “Most of them, if not all, will be new to Palomar College, so this would be the first time they’re enrolling with us.”