‘Palomar Made It Possible To Pursue My Dream Career in Aerospace’ 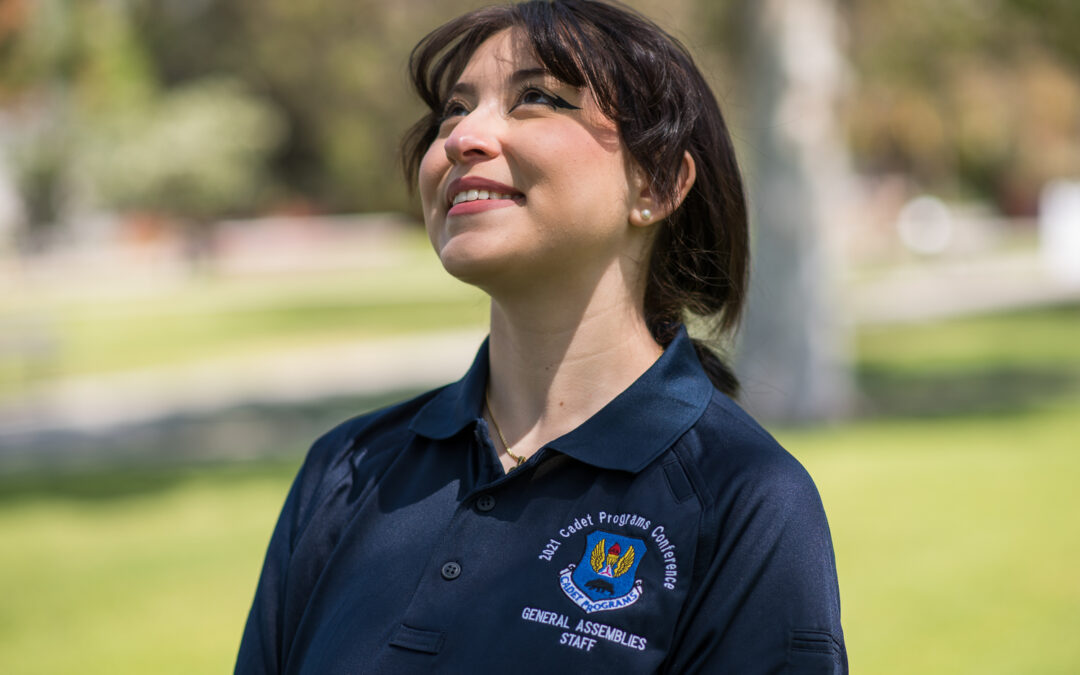 Now on her way to an astronomy degree, Stefanie Storms not only weathered the pandemic while attending Palomar College, she furthered her leadership experience while becoming a NASA Scholar.

SAN MARCOS — For Stefanie Storms, the dream of leaving Earth’s atmosphere and taking her career into space came early. Her favorite movies, she said, are “Alien” and “Interstellar.”

This childhood dream led her to the Civil Air Patrol, the nonprofit U.S. Air Force auxiliary whose Cadet Program aims to shape kids and teens into “dynamic citizens and aerospace leaders.”

And it led, after high school, to an online Astronomy course at Palomar College in Spring 2021—less than a year after the COVID-19 pandemic spread around the globe.

“I found out that I was passionate about astronomy—I finally found something I felt was unique, that I could do,” she said. “I love the weirdness and the existentialism. It’s fascinating, and it’s beautiful.”

Storms was one of hundreds of Palomar students who hardly set foot on the campus thanks to COVID-19. Her first courses, in the fall semester of 2020, were in a remote format, and all of her other coursework would be, too, with the exception of one Physics lab this spring.

But that didn’t hold Storms down.

“I’ve loved the entire experience at Palomar College,” she said. “It really set me up for success. I figured out what I was passionate about, and I feel like I got a head start on my future—especially with the pandemic throwing a wrench in the plans.”

Those plans originally included heading straight to a four-year university, but with her family, Storms decided community college made more sense when nearly all instruction at every college and university would be delivered online under pandemic restrictions.

Once enrolled at Palomar, she met Scott Kardel, the Astronomy professor who would eventually open up her biggest opportunity to date.

It was called the NASA Community College Aerospace Scholars (NCAS) program, and for a student still nurturing her childhood dream of becoming an astronaut, anything that led back to nasa.gov was a sure bet.

“It’s a pretty intense program to get into, because you need to have a letter of recommendation, a certain number of hours of STEM course work, and to be currently enrolled in community college with good grades,” she explained. “It’s not an internship or scholarship, but it’s a really good way to get your foot in the door at NASA.”

NASA itself bills the program as an effort to build “a diverse future STEM workforce by engaging two-year degree seeking students in authentic learning experiences.”

With Kardel’s support, she applied in the summer of 2021 and was admitted in early 2022.

After completing Mission 1, a five-week online course of learning about NASA missions and research, Storms was invited to apply for Mission 2, and was accepted. The more intensive second mission is described by NASA as an “engineering design experience.”

According to Storms, it was the most intensive group research project she’s ever taken on.

“You meet with a team—we ended up having six people—and together you create an entire mission to Mars or to the moon in the span of a week. It’s very intense,” she said. “But it was fun to send my teachers at Palomar excuse letters from NASA.”

With more than five years of experience as a leader in the Civil Air Patrol—Storms is currently a Cadet Major in her Escondido squadron—she was voted the project manager of her team. The mission was held April 13-19 in a remote format, which meant up to 16 hours a day in front of her computer at home.

“This was a really cool way to test my leadership skills in a new environment,” she said. “There were a lot of late nights getting things done and turning in our daily checkpoints. Even though we were down four members (from the usual 10), my team actually won in our group of team projects.”

“I am very proud of Stefanie,” said Kardel. “As a team leader in the NCAS program she propelled her group to a first-place finish for NASA’s Artemis program. She’s been given a rare opportunity and has taken tremendous advantage of it.”

This month, Storms will graduate from Palomar College with a transfer certificate on her way to either UC Berkeley or Northern Arizona University.

“Once I graduate, I hope to commission into either the Air Force or the Navy, and I would like to use that astronomy degree to eventually work with NASA after I get out of the military,” she explained. “I’d say becoming an astronaut is the ultimate dream, but getting to be an aviator is the key step first.”