“Palomar Made It Possible for Me to Reach My Dreams” 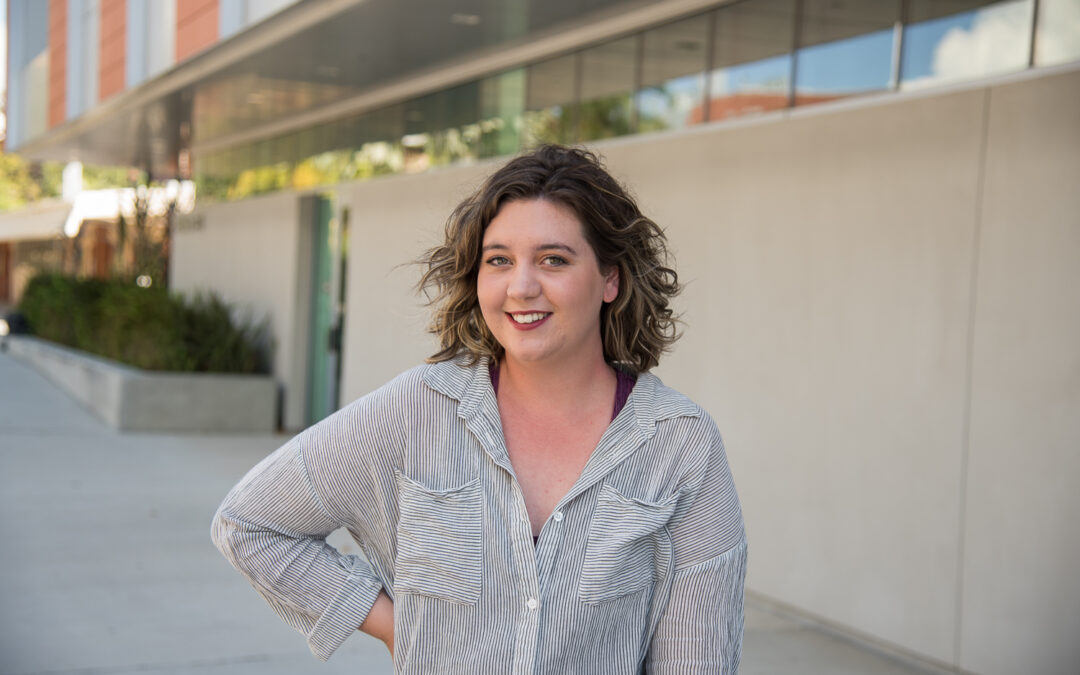 SAN MARCOS — Georgia Phipps took her seat with dozens of other music aficionados in the Athenaeum Art Center in San Diego to listen to a piece entitled, “Melodium ad Dolorem.” It was a weeknight, July 27, 2022, and the ensemble—brass and woodwind—began to play a song no one in the audience except Phipps had ever heard.

It was her song, an original composition written for San Diego New Music’s (SDNM) “Emerging Composers” concert—one of six student compositions chosen to be written, recorded and performed this summer.

“For any composer, hearing their music played live and coming across the way you meant it to—it’s an amazing experience,” recalled Phipps, 23, who will earn her associate degree in music at the end of this semester at Palomar College.

The win came for Phipps after several years of intense involvement in the music industry and what she describes as a rigorous musical education at Palomar.

“It was the first competition I ever entered—the first time I put my music out there,” she said of the SDNM performance. “Palomar has given me the opportunity to learn and explore and make mistakes in an environment where the professors are understanding and have optimistically high expectations of their students.”

Professor Madelyn Byrne, Co-Chair of the Performing Arts Department at Palomar, described Phipps as a serious and dedicated student whose “hard work is coming to fruition now as she is entering competitions, working as a music teacher, and as a professional composer and musician.”

“Georgia has shown tremendous growth as a composer while at Palomar College,” said Byrne. “Her music is imaginative, intelligent, and deeply and thoughtfully expressive.”

When Phipps came to Palomar in 2019, she had already been working in the music industry for several years. After earning an occupational degree in Audio Engineering from Studio West and The Recording Arts Center in Rancho Bernardo, she stayed at the renowned studio as a teacher’s assistant and recording engineer.

During her time there, she engineered recordings of classical music—now her forte, as a composer—in addition to Chinese and Indian music, voiceover work, music videos, and assisted with film scoring sessions with a full orchestra.

“I worked with everyone from rap artists making beats, to death metal and heavy metal bands—which is actually really fun,” she recalled. “If I had to pick a genre as an engineer, I think I would choose some of the hard metal music, like punk—people from that genre, when they’re in the studio, they’re very serious.”

Like many artists in the recording industry, she has worked her share of 16-hour days, and brought to Palomar an experience in the professional side of music that few students have at such a young age: “That was the best thing I could have possibly done,” she said of her time at Studio West. “I got a really good foundation in technology, working as an engineer for three years, until the pandemic.”

“It’s an incredible program,” she said of her time at Palomar. “All of my classes have deepened my ability to write pieces that aren’t just pretty, but also intellectual and interesting—music that moves people and has a message and isn’t just a bunch of notes pushed together. Everything the teachers here at Palomar have taught me, I’ve pulled into my compositions.”

Phipps spent the first month of this summer laboring over her best piece yet, entitled, “God Betwixt Me,” for piano, alto and tenor. She sang the women’s part, her friend Mitchell Ridgeway sang the tenor, and Palomar College Professor Ruth Weber recorded the piano.

“She added so much more life to the piece than I originally saw,” Phipps said of Weber’s recording.

She entered the piece in the SDNM competition and won. Now she is looking toward the next chapter in her education and career, which will include recording a song cycle for Spotify and other streaming music platforms.

Phipps said she is currently applying to universities in hopes of pursuing her undergraduate degree in music next year, after which: “We’ll see. I’m keeping my options open. My goal is to be able to compose, record, and produce music—whatever I need to do to get there is what I’m going to do.”

Selections of Phipps’ music can be heard on her Instagram profile.