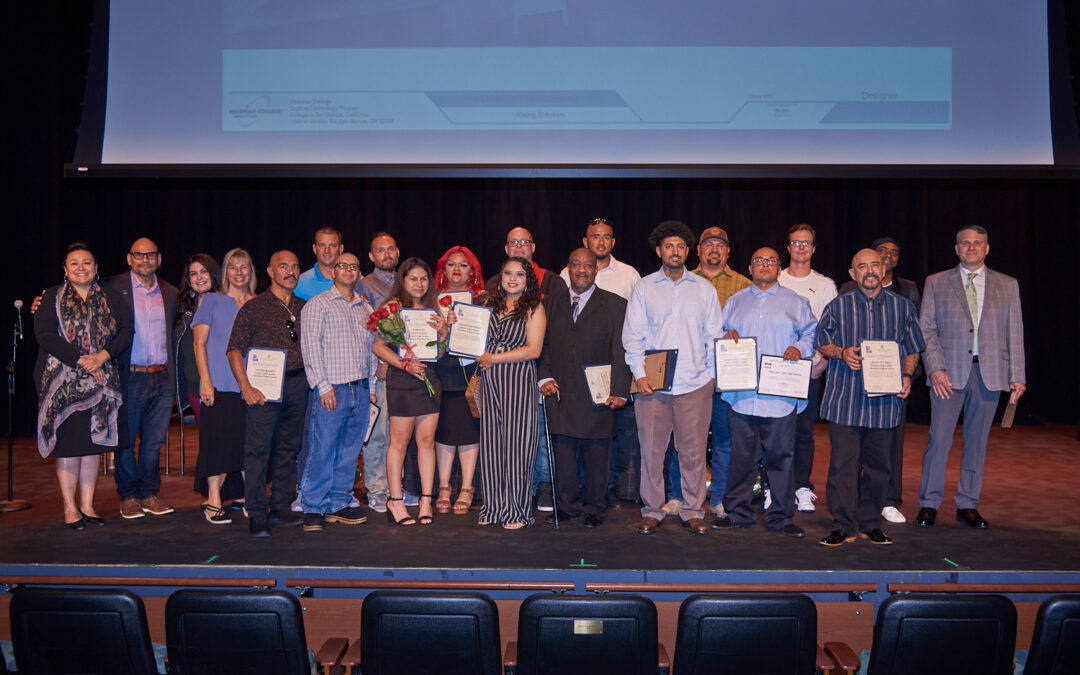 The summer cohort of formerly incarcerated students, known as Transitions but soon to be Rising Scholars, gathered for a celebration of completion and new beginnings.

During the ceremony, the college unveiled plans to provide the five-year-old program with a permanent building on campus.

It was the latest honor among a growing list of achievements for Palomar’s Transitions program, which will change its name to Rising Scholars in keeping with the launch of similar community college programs across the state, and its recent designation as part of the Rising Scholars Network.

The ceremony was characteristically moving, lively, and deeply emotional, as a variety of speakers shared personal stories, gratitude and encouragement for their fellow students.

“The Transitions program has helped me stay on track, out of a world of chaos and oppression,” said Cynthia Murillo, a 2022 cohort graduate who spoke during the ceremony. “It’s not just a cohort of formerly incarcerated individuals—to me, it’s a family that has come from a similar background as mine.”

Palomar’s Superintendent/President, Dr. Star Rivera-Lacey, spoke to an audience of around 100 people, emphasizing the importance of Rising Scholars to the campus community.

“This is a crown jewel for Palomar College, and to our fifth cohort, congratulations! I’m so overwhelmingly happy that you have found an academic home with Palomar,” said Dr. Rivera-Lacey. “This is your casa—you belong here, you are valued here, and this institution would not be the same without you.”

“I cannot think of a more well-deserving recipient of this award,” she said. “Martin Leyva’s profound commitment to his students, and to this program, is to be commended. It is because of his vision that we’re able to be here to celebrate the achievement of our fifth cohort.”

Leyva accepted the award and spoke of his own experiences as a formerly incarcerated student, which led him to form the first program of its kind at Santa Barbara City College in 2008.

“I walked out of prison 15 years ago terrified of what society had in store for me,” said Leyva, who teaches in the summer program at Palomar. “Many of us are re-entering a society that pushes us away and marginalizes us, and so when we re-enter, often, we go back to our addictions, our ways of living, and back to prison, because we don’t know how to function out here. But 15 years ago, I found education and fell in love with it.”

Leyva added: “Thank you, especially, to our students—this work doesn’t exist, it means nothing, unless you take that brave step to walk in the door.”

Friday’s ceremony concluded with a presentation of the new RS Building (for “Rising Scholars”), which will take an unmistakable location along the driveway of the main entrance to campus, with lights illuminating the word “RISE” as visitors arrive. The project, with indoor and outdoor study and gathering spaces and resources for Rising Scholars students, is scheduled for opening in Spring 2023.

The summer session, for which Friday’s ceremony served as a graduation, introduces students to the program and includes tutoring, weekly team building activities, guest speakers, two for-credit classes, and various other forms of support.

The statewide Rising Scholars movement was established in October 2021 following the unanimous passage of California Assembly Bill 417, which included funding for “services in support of postsecondary education for justice-involved students” throughout the California Community College system.