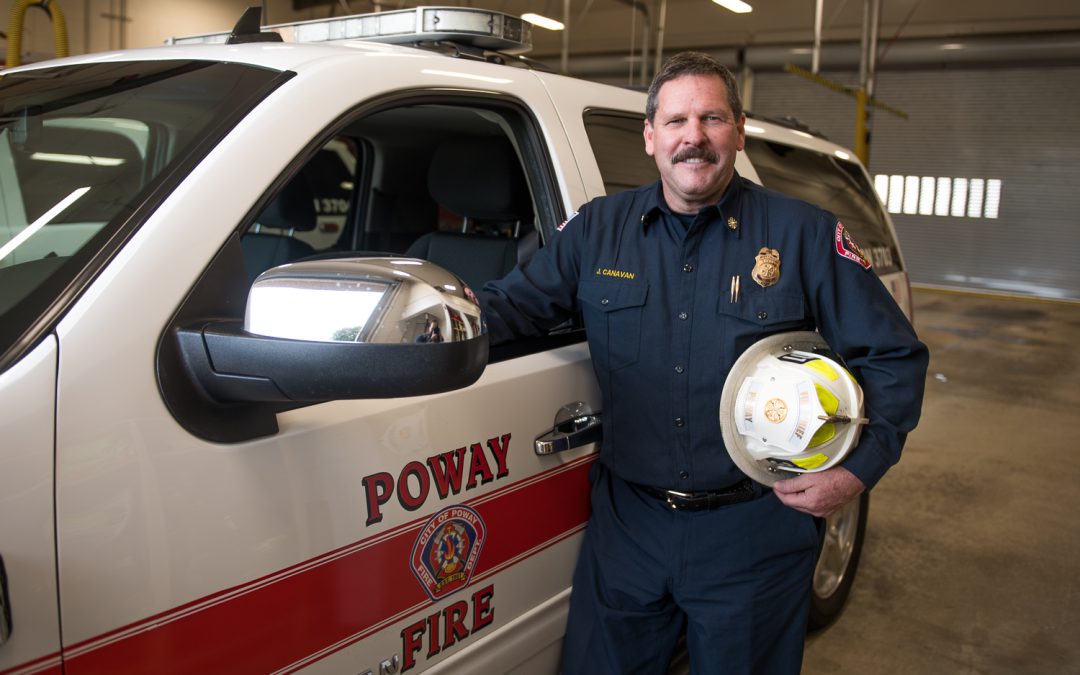 Poway’s newly installed Fire Chief, Jon Canavan, reflects on his personal history with Palomar College—and the benefits of a top-notch academy to the region’s fire departments.

POWAY — The fire chief’s office in the City of Poway looks out on Poway Creek, a greenway filled with trees, and beyond that a hillside where walking trails cut through the chaparral. A block away, traffic flows briskly along Poway Road.

It’s a good representation of Poway’s unique character: business parks and suburban neighborhoods to the north and beautiful countryside to the south. Between them is Station 1, situated in what firefighting officials like to call a “wildland-urban interface”—the type of frontier that Jon Canavan has learned by heart in the 29 years since he graduated from Palomar College’s 2nd Fire Academy.

Canavan was named Fire Chief in July and oversees the Poway Fire Department’s 53 uniformed personnel— at least half of whom, he said, “have had some experience either teaching in or graduating from a Palomar College program.”

The department operates out of three stations spread throughout the city, and in 2018 responded to 5,000 calls for emergency service.

Like many fire officials in the region, Canavan has deep ties to Palomar’s academy and Fire Technology program.

“I have an intimate awareness of the strength and the benefits of the Fire Technology program, the Fire Academy, and the Emergency Medical Education program at Palomar College—both as a student, as an instructor, and as a regional fire service leader,” Canavan said. “We consistently see students come out of Palomar College who are well-prepared for careers as firefighters and paramedics.”

Originally from San Bernardino, he was hired by the City of San Marcos in 1990 and attended the 2nd Fire Academy at Palomar, the year after the renowned academy was launched.

“It made a huge impression on me,” he recalled. “I loved the instructors, I enjoyed the format, and immediately upon graduation, I became an adjunct faculty member at Palomar in the Fire Academy.”

He taught part-time at Palomar until 2004, when he left the San Marcos Fire Department as a captain and went to Poway as a Division Chief.

Canavan speaks highly of a joint testing and recruitment program sponsored by Palomar College that includes virtually every fire agency in North County. And he still— after all these years—praises the academic programs at Palomar that have turned out hundreds of local firefighters and paramedics.

“Many, many of our entry-level firefighter-paramedics are graduates of either the Emergency Medical Education program at Palomar College, or Palomar’s Fire Academy,” he said. “Palomar is teaching techniques that are aligned with the way we do things—that is the benefit of a regional fire academy that welcomes input from the surrounding fire departments.”