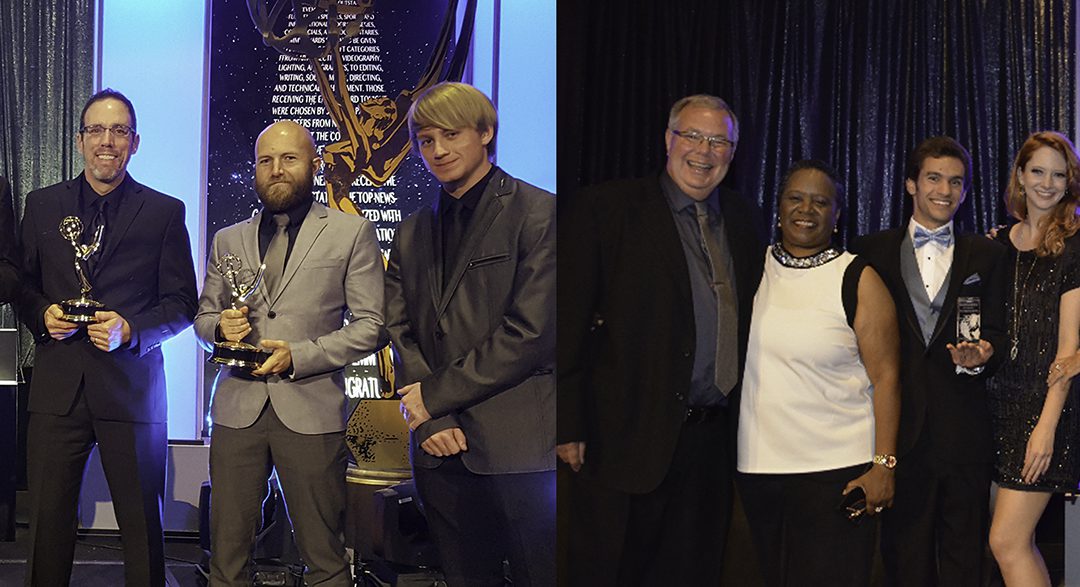 This year Palomar DBA and Cinema students came away with four awards for student productions out of five nominations, and one student received a scholarship. PCTV productions received four Emmy awards out of six nominations.

Student Production Awards were received for these DBA productions:

The other DBA students nominated for Student Production Awards are Shahrooz Mahmoodi and Mobin Malirad for their film The Pull.

Pat Hahn, DBA professor said, “Every year it is thrilling to see the reactions on our students’ faces when get to the awards ceremony. They realize that their work is good enough to be judged by professionals – right along with the best of the best in the industry. Being nominated is an honor in itself and winning an award represents a true milestone in each of their careers.”

PCTV Emmy results are as follows:

Other PCTV nominations were for the same film, Joshua Tree: Threatened Wonderland in the categories of “Photographer – Program (Non-News),” Bill Wisneski and Chris Culp; and “Editor (No time limit) – Program (Non-news)”, Chris Culp.

“These awards are a reflection of the talented staff, faculty, and students we have here at Palomar College” said Wisneski.   “I feel very fortunate to be able to work on projects like this Joshua Tree documentary that bring attention to important environmental issues. It is so gratifying to be able to create compelling videos which educate both our students and the wider community. ”

The annual presentation of these awards is intended to be an incentive for the continued pursuit of excellence for those working in television and to focus public attention on outstanding cultural, educational, technological, entertainment, news and informational achievements in television.

Palomar College students have now received 58 NATAS Student Production Awards for outstanding achievement. Palomar is ranked as one of the best community colleges in the country in preparing students for work in TV News Journalism, TV Production, Cinema and Digital Media. For more information on degree and certificates in these fields call 760-744-1150 ext. 2964.