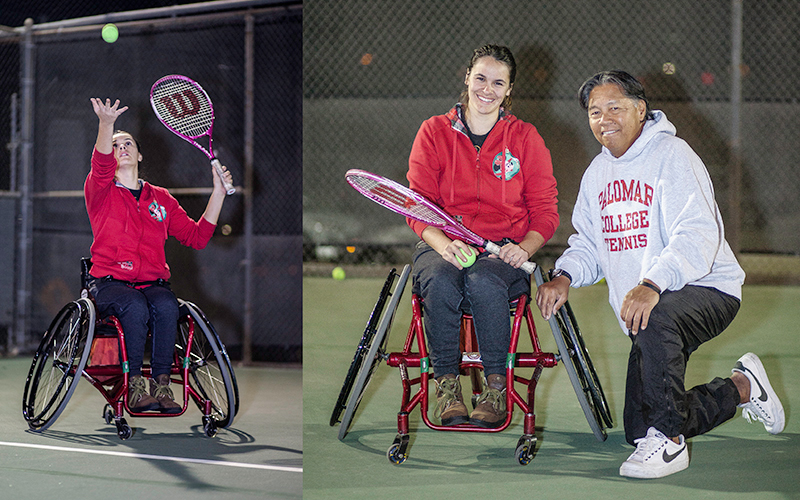 SAN MARCOS (January 23, 2017) – Marissa Medina isn’t about to let a disability like Cerebral Palsy (CP) get in the way of establishing herself as a tennis player, or anything else for that matter.

The 23-year-old Palomar College student and Carlsbad resident completed a tennis class in December at Palomar College. Tennis is one of many physical activities Marissa participates in despite her disability.

Marissa’s first eight weeks in the 16-week class taught by Palomar Tennis Coach Ronnie Mancao were spent on her feet, along with her able-bodied fellow students. Frustrated by her limited ability to stay balanced during play, she started thinking about the idea of playing the game from a wheelchair. While she was at first apprehensive about approaching Mancao with this idea, she mustered up the courage and found that he was not only supportive, but quite knowledgeable about teaching tennis to people with disabilities.

Mancao, a longtime charter member of the Professional Tennis Registry/USA was a wheelchair clinician for that association and traveled the United States instructing other teaching pros how to teach wheelchair tennis. He also has taught tennis clinics for physically challenged individuals.  “Marissa is eager to learn and asks very specific detailed questions when I’m coaching her,” Mancao said. “She is determined to execute her motor skills properly and doesn’t make excuses concerning her tennis performance…she just asks, ‘How can I fix it Coach?’ … Marissa has a friendly, happy personality and her outlook on the world she lives in is always positive.”

A graduate of San Marcos High School, Marissa was born in Denver and was diagnosed with CP at the age of one. Her family, which includes a twin sister and an older sister, relocated to Carlsbad when she was six years old. With a lifelong interest in music, she learned to play piano when she was young and performed in the choir while in high school. She has taken music classes at Palomar and initially planned to pursue an associate degree in music; however she feared her physical instability might make it difficult to perform on stage.

Currently, she is focused on a career in early childhood education. She is preparing to receive her associate degree from Palomar in May, and then transfer to Montana State University in the fall. In addition to her studies at Palomar, Marissa has worked at the College’s Reading Center for two years. She also helps care for a toddler with disabilities and works at buybuyBABY in Encinitas, where she specializes in informing people about the proper use of car seats. “I am passionate about car seat safety,” she said and plans in the near future to become certified as a car seat installer.

According to Melinda Carrillo, chair of Palomar’s Reading Services program, “Marissa is an amazing young lady. She began her association with the Reading Services Department as a student in our transferrable Read 110 “Power Reading Class” and quickly moved on to working as a tutor for the department due to her strong work ethic. Staff and students alike look forward to working with Marissa and enjoy her quick wit and friendly personality. We are all so proud of her acceptance at Montana State and know she will shine in her studies there.”

Describing herself as “adventurous and very open,” Marissa has studied ballet and gymnastics. In the past she participated in the adaptive ski program sponsored by Palomar’s disability resource center. While she acknowledges her choice of Montana State might present some climate challenges, she looks forward to exploring skiing in Montana.

Marissa has undergone six surgeries to improve her physical abilities and plans to have Botox therapy on her leg muscles in the near future. According to an article in News Medical, Botox injections have been shown to relax the muscles in CP patients, making it easier for them to function properly http://www.news-medical.net/news.

As she anticipates graduation, Marissa reflects on her experience at Palomar College. She said when she started at Palomar, she did not have a clear direction or a lot of self confidence. However, through taking classes from some “great teachers” and working at the Reading Center, she has gained a solid sense of herself and has a positive outlook on her future. Mentioning professors including Coach Mancao, Melinda Carillo (Reading), Jose Briceño (Math) and Sean Figg (Geology), she said, “They made me feel like I can succeed!”