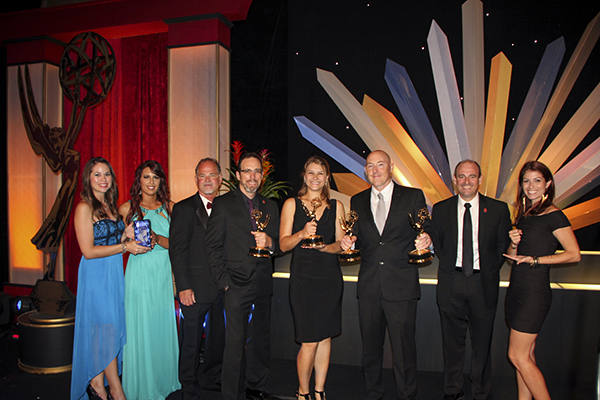 This is a second Emmy for Peters, who won last year as Producer of Palomar College’s North County News, and who is now working as a producer for Grand Slam Direct, a video production and marketing company based in Carlsbad. Peters said, “The experience and the opportunities that Palomar has provided over the last few years is a step up to the real world…. The Emmy has given me a lot more motivation to learn even more about the television broadcasting industry so that I can better my skills and hopefully win more as a professional one day!”

Kirtides said, “Winning to me meant a whole new door opened to many opportunities that I am excited to experience and be a part of…I feel that this win will guide me towards what I want to do for the rest of my life.”

“This is a great accomplishment for PCTV and a wonderful recognition, once again, by peers in the commercial broadcast industry, of the high quality of PCTV’s productions,” said Jim Odom, manager of Palomar College educational television (ETV) and KKSM radio operations.

According to the National Academy of Television Arts and Sciences (NATAS) website, the Emmys honor “outstanding achievement in regional television in the Pacific Southwest including San Diego, Las Vegas, Santa Barbara, San Luis Obispo, Santa Maria, Bakersfield and Palm Springs…The presentation of these awards is intended to be an incentive for the continued pursuit of excellence for those working in the television and media industry and to focus public attention on outstanding cultural, educational, technological, entertainment, news, informational programming and craft achievements in television and on-line.”  http://www.nataspsw.org/