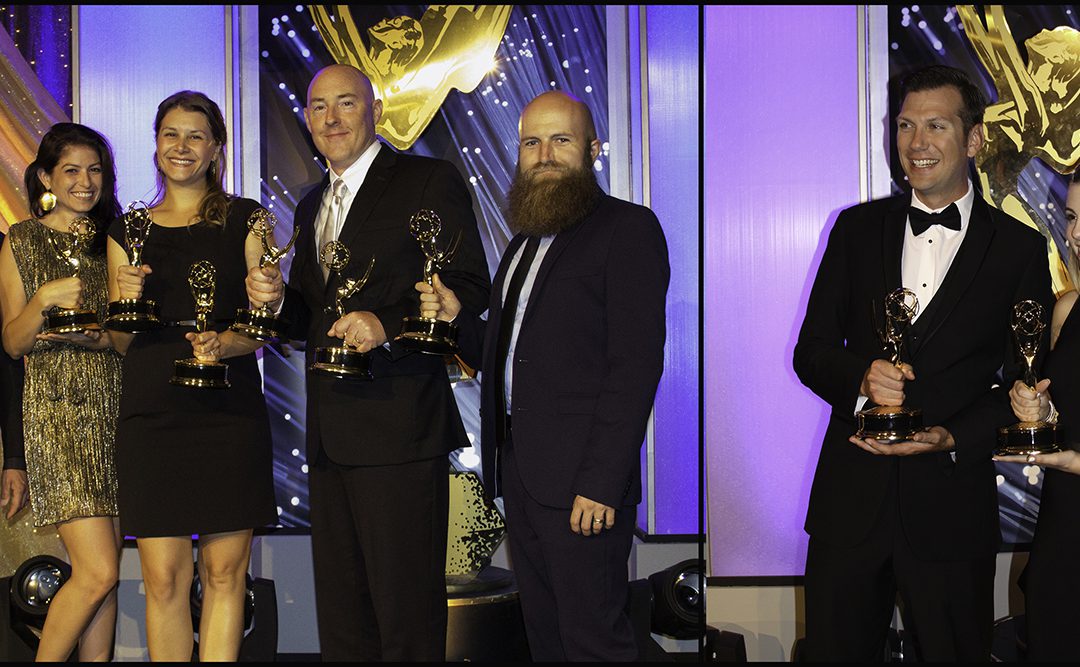 SAN MARCOS (June 29, 2015) – Palomar College added to an already impressive record of Emmy Award wins with the results of this year’s competition for outstanding achievements in television and digital broadcast arts.

The Pacific Southwest Chapter of The National Academy of Television Arts and Sciences announced its 2015 Emmy® Award winners at a ceremony held at the Westin Mission Hills Golf Resort in Palm Springs on Saturday, June 20. Once again, Palomar College staff and students were nominated in several categories and were well represented as the winners were announced.

Brown received the Emmy for Best Talent as host of the live morning showPalomar Live.  Fasulo had two nominations and won for producing North County News. Both programs are cablecast on Cox, Time-Warner and AT&T.

Brown is continuing his education this fall at Palomar and hopes to become a full-time broadcast journalist after graduation.  “The experience and the opportunities that Palomar has provided over the last few years is really a step up to the real world,” Brown said. “The Emmy has given me a lot more motivation to learn even more about the television broadcasting industry so that I can better my skills and hopefully win more as a professional one day!”

This is the first nomination and win for Jennifer Fasulo. She currently attends law school in Boston and begins work this summer with the Massachusetts Department of Justice.  Her dream is to become the legal correspondent for C.N.N. Pat Hahn, professor of Digital Broadcast Arts and Department Chair of Media Studies said, “These students are so amazing. Their work ethic and character are remarkable. Our future is in good hands.”

Wisneski said, “Breaking Point chronicles the rapidly shrinking Salton Sea, the largest lake in California and an ecological basin for migratory birds on the Pacific Flyway.  If nothing is done to mitigate the receding Sea, toxic dust storms may threaten the health of millions of people in Southern California.” More information on the Breaking Point documentary is at:http://www.breakingpointdoc.com/

James Odom, Manager of Palomar’s Educational Television and KKSM Radio Operations said, “I heard several positive comments from the commercial television professionals at the award ceremony about the continuing success of Palomar in the competition. We are so proud of the excellence of the work of these individuals – and all the Palomar College Emmy nominees for their fine representation of Palomar College.”

Also nominated for Emmys were DBA students Zach Griffin, for his film Rich on Life, and Anissa Ocansey, in the talent category for her work on Palomar Live. Nominees in the PCTV area included Chris Culp for editing; Luke Bisagna for audio, and Wisneski for Directing – on Breaking Point.

According to the National Academy of Television Arts and Sciences (NATAS) website, the Emmys honor “outstanding achievement in regional television in the Pacific Southwest including San Diego, Las Vegas, Santa Barbara, San Luis Obispo, Santa Maria, Bakersfield and Palm Springs…The presentation of these awards is intended to be an incentive for the continued pursuit of excellence for those working in the television and media industry and to focus public attention on outstanding cultural, educational, technological, entertainment, news, informational programming and craft achievements in television and on-line.” http://www.nataspsw.org/