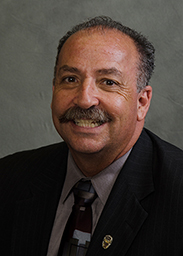 DiMaggio comes to Palomar College as a 29-year veteran law enforcement officer.  In his most recent position he served as Police Chief at Mt. San Antonio Community College (Mt. SAC) for four years; he was responsible for providing a safe and secure learning environment for students, faculty and staff. During his tenure at Mt. SAC, he was a member of several safety committees.

Prior to joining Mt. SAC, DiMaggio was with the Riverside County Sheriff’s Department for 24 years where he served in many capacities and areas including the Riverside Station; Moreno Valley Station; Southwest Station; Courts Division; Traffic Division; Technical Services Bureau; and the Ben Clark Regional Training Center. He also served for four years as the School Resource Liaison between the Riverside County Sheriff’s Department and the Riverside County Office of Education. During his years of service, he rose through the ranks to Captain at the Ben Clark Regional Training Center and the Sheriff Court Services Division.  Prior to becoming a supervisor/manager, he was a patrol deputy and motorcycle enforcement officer.

“We are particularly pleased to welcome Chief Mark DiMaggio to Palomar College,” stated President Robert P. Deegan.  “The safety and security of our students, faculty and staff is our number one priority and Chief DiMaggio’s wealth of law enforcement experience will insure that the Palomar College Police Department’s strong safety record continues.”

DiMaggio holds a Bachelor of Science degree from Southern Illinois University.  He is past-president of the California School Resource Officers’ Association and is an honorary member of the National Association of School Resource Officers.  He is currently the vice president of the California College and University Police Chief’s Association. He has held the position of instructor/training coordinator for Riverside County Office of Education ROP law enforcement classes.  For the past 18 years, he has served as an associate professor for Riverside Community College and Mt. San Jacinto Community College teaching Administration of Justice courses.