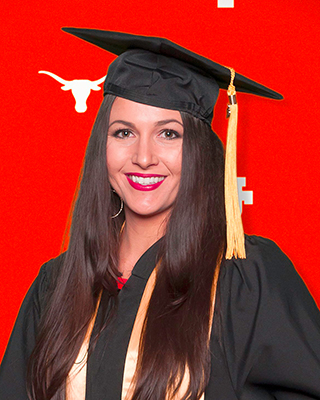 SAN MARCOS (August 12, 2015) – Palomar College science faculty members weren’t surprised to hear that their former student, Victoria (Aiello) Arnold went on to achieve great things at the University of Texas (UT) at Austin. “Her academic record here at Palomar was brilliant,” said Dr. Carey Carpenter, her former anatomy professor. But the magnitude of her success made quite an impression on him and others.

Carpenter was beaming as he spread the news that when she graduated from UT last May, Arnold won one of the university’s most prestigious awards, the George H. Mitchell award for undergraduate academic excellence, worth $10,000. The campus-wide award, open to 50,000 students across disciplines, was narrowed to seven finalists, each nominated by a faculty member, and then given to one student.

With a major in Human Biology and an emphasis on problems in developing countries, Arnold received the award “particularly because of the strength of her undergraduate research: In Vivo Analysis of Hyaloid Vasculature Morphogenesis,” said Carpenter. Arnold, who is now applying to medical schools, explained that the subject for her research project was the vascular development of the eye and associated mutations.

A San Diego native who grew up in Ramona and graduated from Ramona High School, Arnold said her experience at Palomar College played a key role in her academic success and her decision to pursue medicine. “I was enrolled in Dr. Carey Carpenter’s anatomy class and not only realized that I wanted to become a physician, but also that I was capable of doing so,” Arnold said, crediting him with “[giving me] a confidence in myself I didn’t have before his class.”

“The following semester, the new Science, Technology, Engineering and Mathematics (STEM) center at Palomar offered seminars and informationals that were applicable to my professional desires,” Arnold said. She followed her Palomar biology professor Jim Gilardi’s advice and attended an info-session about summer research  programs. “Immediately after the session, I applied to the programs mentioned and ended up being invited to participate as a research intern at Purdue University for a summer! Within the same week, I received my acceptance to the University of Texas at Austin.”

Now in the process of applying to medical schools, Arnold works as an intern at the Dell Pediatric Research Institute, UT at Austin’s medical research facility. In her work there, she has designed a protocol for a human supplement trial set to begin this fall, and she also studies the teratogenicity of industrial chemicals. In her medical school application personal statement, Arnold wrote,  “To say that I enjoy research is an understatement. I love it. However, for me, a research career would lack one element: patient interaction. I am drawn to the human interaction aspect of medicine, where scientific practice is translated into patient care.”

Arnold was able to experience her dream of “merging of biology and patient care” while in Argentina on a medical mission trip in 2009. “My triage responsibilities afforded me my first patient interaction and showed me that I was drawn to the uniting of science and service.” She has continued this type of work through Operation Smile, a charity organization that focuses on providing cleft lip and cleft palate surgeries in underdeveloped countries. As vice president of UT’s chapter of Operation Smile, she has been very active in raising funds and awareness for these surgeries. In addition, she volunteers as a science tutor to at-risk teens.

While clearly proud of her accomplishments and excited about her future, Arnold is quick to point out that her road as not always been an easy one. “I come from a single-parent household where my mother worked nights in a casino and my father wasn’t present. Our goal was survival, not reaching for the stars, which meant I wasn’t well-prepared for higher education.” The “strong work ethic and understanding of responsibility” her mother instilled in her proved invaluable to her ability to succeed.  “I have learned so much, but most importantly, that persistence is 90% of success.” She also credits the people and her experience at Palomar College “for sparking the realization of my potential.”

Arnold  lives in Austin with her husband, who works as a paramedic, and their dog. She enjoys spending time with them, and doing the outdoor activities Austin offers like “hiking and paddle boarding, plus eating great food.” However she admits both she and her husband miss San Diego.