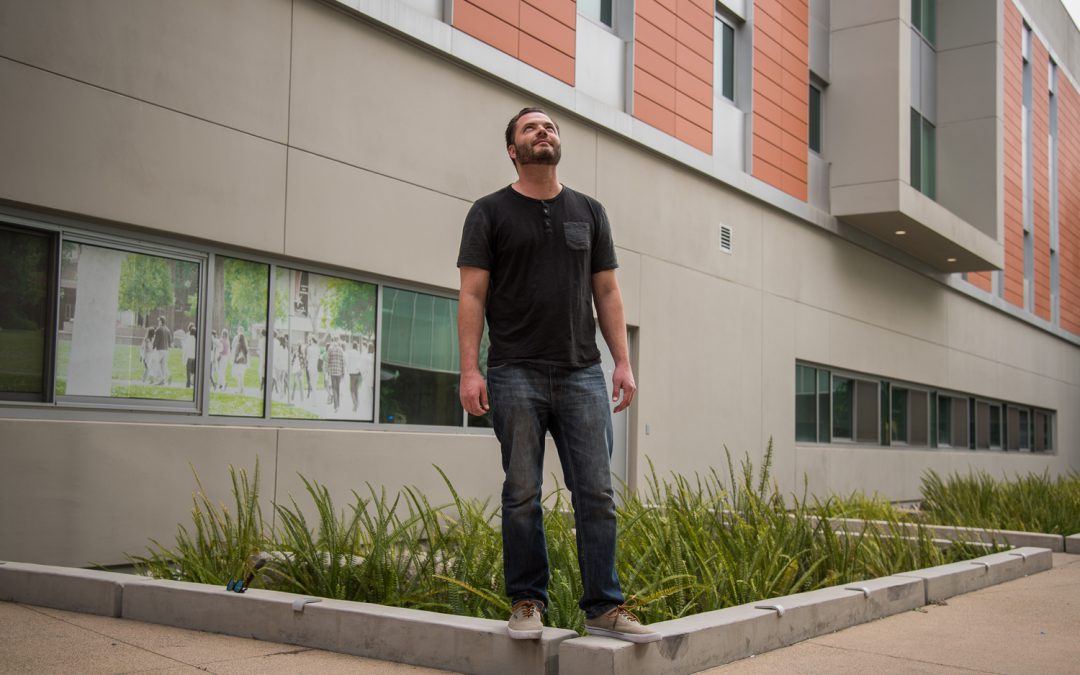 Kory Nokes spent five years behind bars before entering Palomar’s Transitions program for formerly incarcerated students. “Palomar made it possible for me to achieve my true potential,” he says.

SAN MARCOS — Not long after being booked into state prison, Kory Nokes realized he was going to be reminded on a daily basis that he lived at rock bottom.

“When I put my clothes on, it said ‘prisoner’ on them,” he recalled. “No privacy—the guards, the sounds, the violence. But I decided I wasn’t going to keep going down. There was only one way I was willing to go, and that was up. I started investing in myself every day, to slowly chip away at this mountain I had in front of me.”

In education, Nokes found his way out, and it’s still carrying him toward his lofty goals, nearly a year after his release.

“I owe everything to my education. It’s opened doors for me, it’s allowed me to see the world in an entirely different way,” he said. “Palomar made it possible for me to achieve my true potential.”

In January, researchers at Stanford Law School published a report citing a national “movement to expand higher education to incarcerated and formerly incarcerated students,” with 19 community colleges in California alone providing full-credit, face-to-face classes in “nearly all of the state’s 35 prisons.”

The study found just shy of 6,000 inmates enrolled, and more than 50 “success programs and student clubs for formerly incarcerated students” on college and university campuses, serving more than 1,000 students in 2019.

At Palomar, the “Corrections-to-College” program is known as Transitions, and it includes a summer academy, as well as ongoing support for formerly incarcerated or “justice involved” students. Through a groundbreaking partnership with the San Diego County Sheriff’s Department, the college also provides credit courses inside the Vista Detention Facility.

When Nokes got the opportunity to enroll in community college behind bars, one of the classes he had to take was algebra. That’s when he discovered that he loved mathematics.

“I ended up meeting this guy who tutored me, and I did very well in the class. He was like, ‘So you’re taking the next math class, right?’ So I went into college algebra, aced the class. Then trigonometry—aced it. Then pre-calculus—aced it. All behind bars, with no teacher, just this one guy, an inmate, tutoring me once a week.

“I had a textbook, I had a calculator, and I had a pencil. I got to the point where I realized there was no problem I couldn’t solve if I tried long enough.”

Today, Nokes is a student employee at Palomar, serving as a Peer Mentor in the Counseling Department as well as a Student Ambassador. After completing the Transitions program last summer, he was chosen by his cohort to speak at the program’s graduation ceremony, and he has since represented the college at other regional events.

Nokes said he plans to transfer to a four-year university and ultimately pursue a PhD in math. He said he wouldn’t be on the path he’s on now without the support he found in the Transitions community at Palomar.

“Re-entry was very, very different than I anticipated,” he recalled. “There was a lot of stress. The world is faster now. I was fortunate to have a friend who referred me to the Transitions program. I started the program a few months after I paroled, and it basically gave me a safe place to land. There were people here who had experienced what I experienced.

“I had zero social capital coming out of prison,” he added. “Transitions gives people a chance, regardless of what happened. The reality is, a lot of people need love, they need support—and that’s what they did for me.”