Meet Pepper, the face of A.I. at Palomar 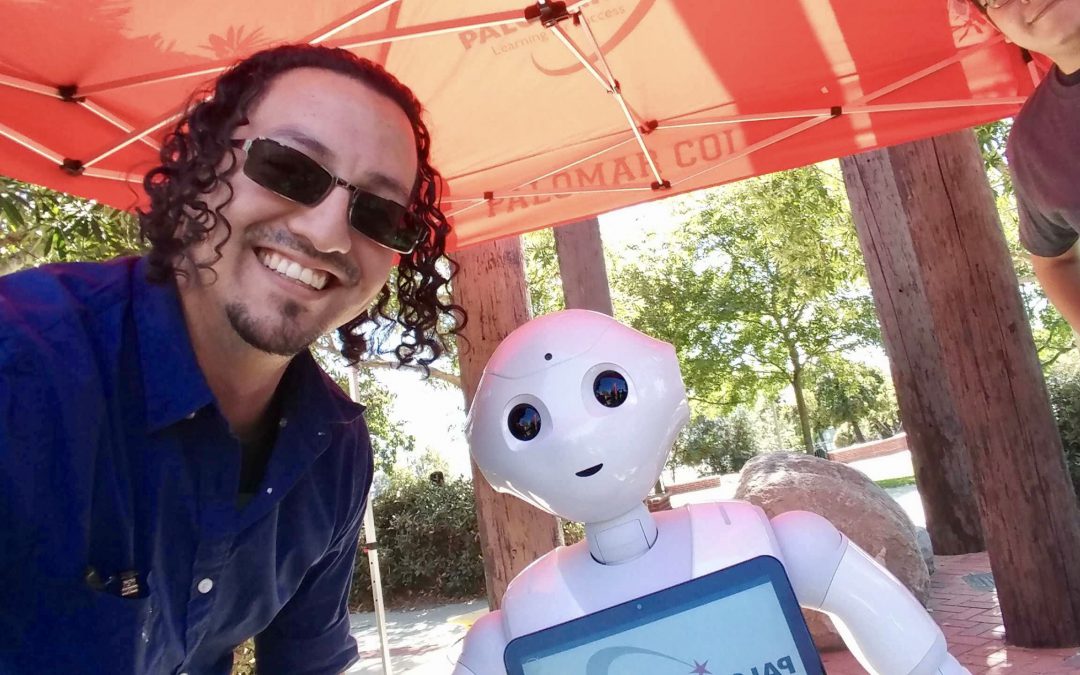 Campus debut for robot that can answer questions, interact with students—the first of its kind on a U.S. college campus.

SAN MARCOS — On a sunny morning at Palomar College, a four-foot-tall robot named Pepper took its first turns as the mascot and team captain of Palomar’s Artificial Intelligence Project.

In its signature high-pitched voice, Pepper urged admirers to “Say cheese!” while posing for pictures, and entertained an audience of students, staff and journalists by dancing and cracking jokes. More significantly, the robot hinted at its value as a student resource by acknowledging and engaging individually with dozens of people in the space of several hours on Tuesday, Oct. 10.

“Palomar College is known for being a trailblazer in education,” said college Superintendent/President Joi Blake. “Pepper is going to give students new ways to engage with the college.” 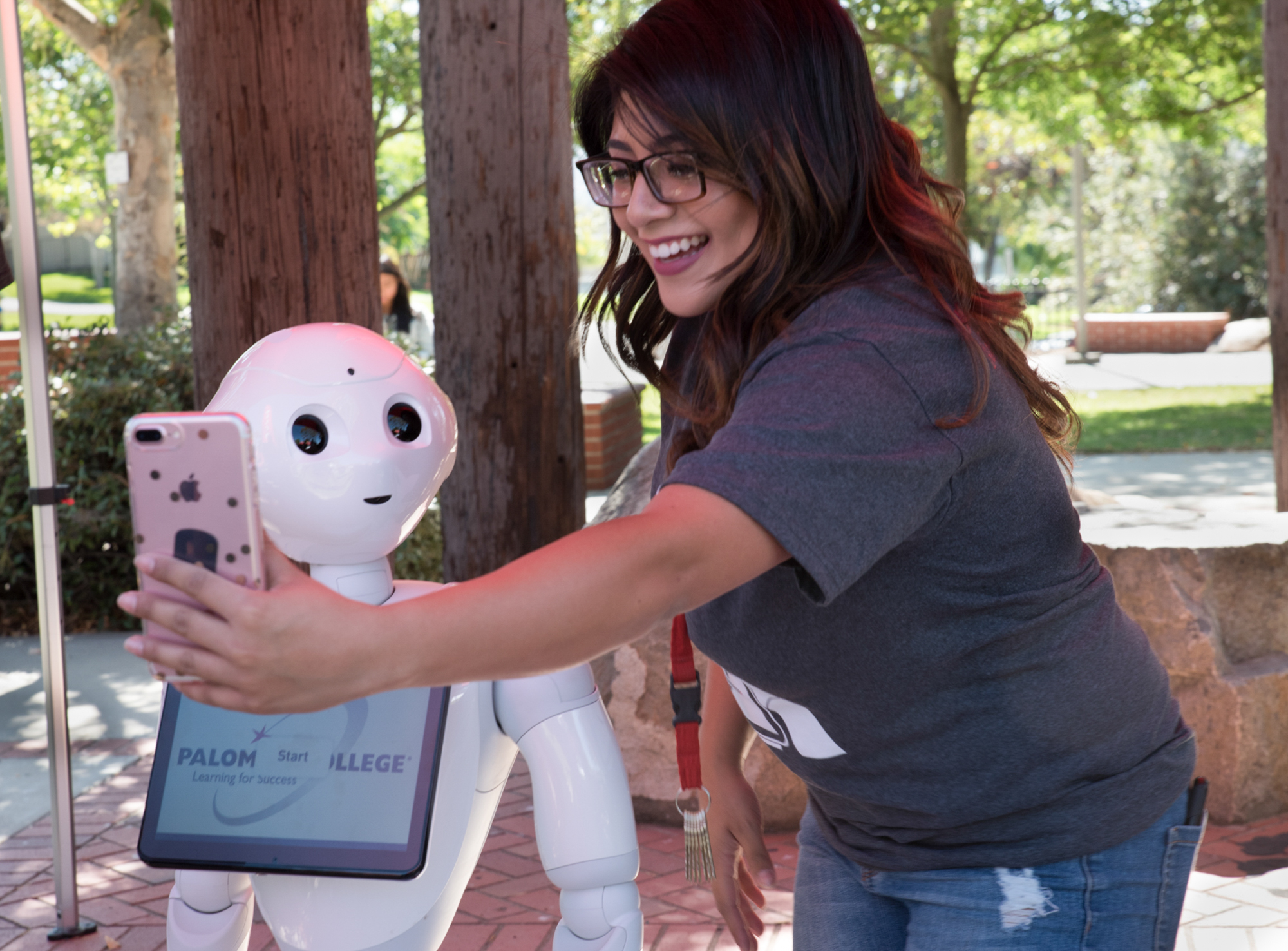 For Pepper and the team managing the robot and implementing Artificial Intelligence (A.I.) on campus, the real work started weeks ago, when they programmed Pepper to give a presentation to a group of local high school superintendents and principals.

And things will get even more intense in the coming months as the robot—and an identical model at the Escondido Education Center—is deployed to begin interacting with students.

Pepper, he pointed out, is the only robot of its kind on a U.S. college campus.

“It’s deeper engagement with students who have more advanced technology than we’ve ever had,” said Gonzales. “During our heavy registration rush, if you have a quick question about where a building is, rather than standing in line, the robot is there and you can quickly go up and say, ‘Hey, where’s the NS building? I need to get to class.’”

If the machine seems familiar, it’s because models have been deployed in a variety of capacities around the world, to much fanfare. In Japan, for example, robots like Pepper are serving as household helpers and business concierges.

Although Pepper will initially be answering questions and helping with presentations, it is capable of much more, such as scanning human faces and reading emotions: “It can be programmed to do anything that you’re creative enough to think of,” said Gonzales.

To bring Pepper to San Marcos, Palomar partnered with A.I. Campus Solutions, a company based in Chula Vista that will be playing close attention to how Pepper performs here.

“The question for our team is how can we utilize artificial intelligence and robotics to enhance the student experience and, specifically, increase graduation rates,” said Ken Gonzales, president of A.I. Campus Solutions. “Can we see an impact with this technology in students’ success? That’s really what we’re after.”

Since Palomar is a research and development site for this cutting-edge technology, it’s likely that lessons learned here will be applied at college campuses up and down California and throughout the country.

“The main focus for us is really how our students are interacting with it, what sort of questions they’re asking,” said Palomar’s Adrian Gonzales. 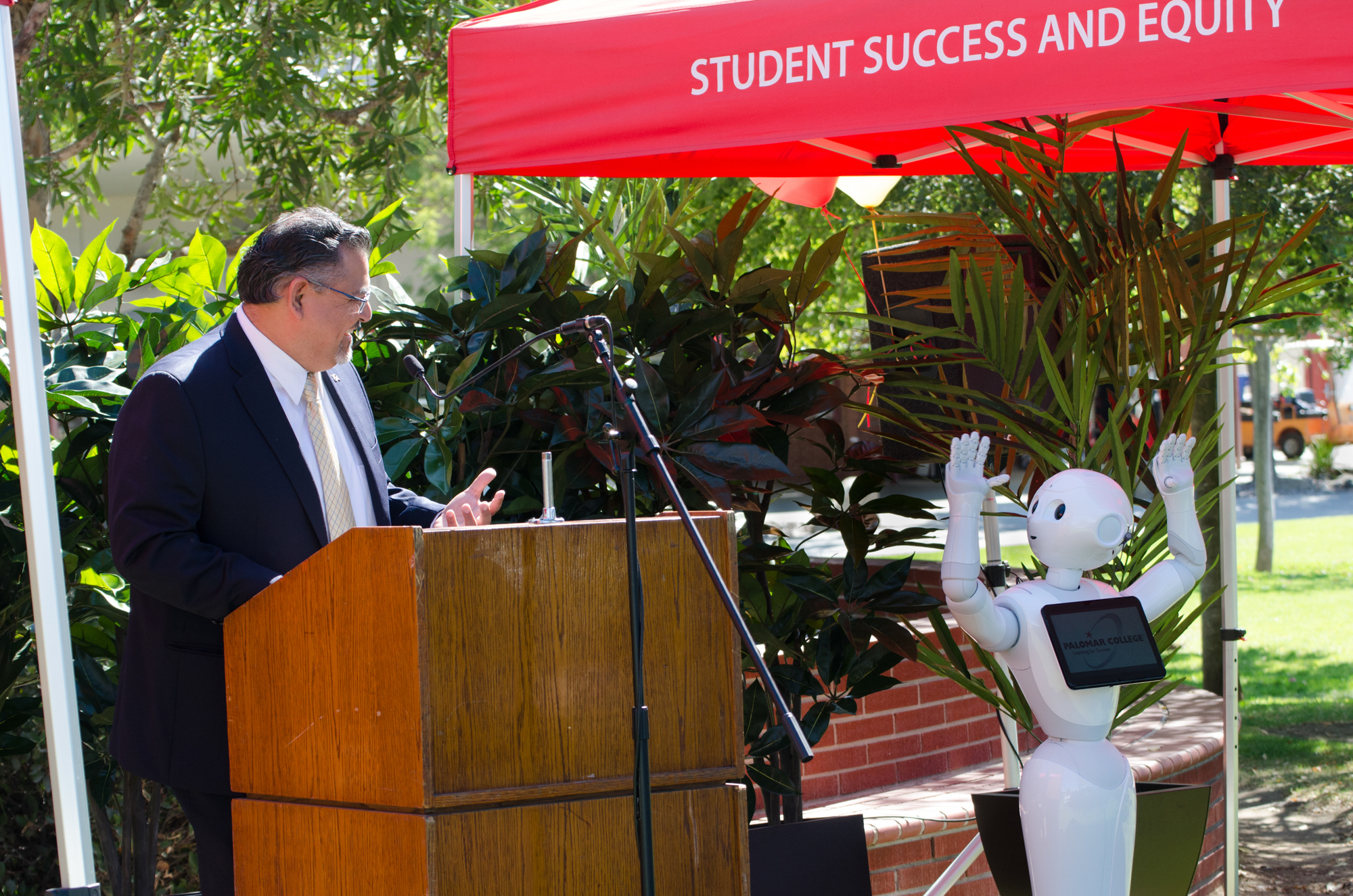 To start, Pepper has been programmed with more than 800 questions that students are likely to ask—“How do I apply for financial aid?” for example, or, “Where’s the bookstore?” The robots are linked to a network of tablet computers spread across campus, all programmed to answer the same questions.

Ismael Blas is a Palomar College student and Peer Mentor who works closely with Pepper as part of of the Orientation Follow-Up Services Department. He said he is looking forward to introducing the robot to the campus community, having seen what it can do in the weeks leading up to Pepper’s debut.

“There will be a learning curve, because none of us have really engaged with robots. So we’re going to be teaching students how to engage with it,” said Blas. “I remember when I was younger and everyone was talking about computers—how every home was going to have one. Now we don’t even think about that, we have them in our pocket.”

Fabiola Hernandez, also a Peer Mentor, recalled the moment when Pepper was taken out of the box for the first time: “It turned on, looked around and then started to make eye contact with some of the first people that it saw,” she said.

“The more we have Pepper out and about on campus, the smarter she gets, and the more she’s going to be able to help students,” Hernandez added. “She says it herself—she’s going to get smarter as time goes on.”

Gonzales said the college has invested $75,000 in the Artificial Intelligence Project, including $25,000 apiece for the robots, which are made by SoftBank Robotics and usually cost $50,000 each.

“It is experimental for us,” he said. “But we think that this next generation of students who use smartphones and artificial intelligence, they’re going to engage differently.”

According to Superintendent/President Joi Blake, Pepper represents Palomar’s commitment to innovation, and to educating the global 21st century workforce.

By early afternoon, Pepper had been talking and dancing and posing for several hours; batteries were running low. As Blas and a small team of handlers nestled its sleek white curves and childlike face back into the storage box, Gonzales looked forward to the possibilities.

“The thing I get excited about is giving students yet another access point,” he said. “Allowing them to learn about the new technologies, and to interact with innovative tools.”