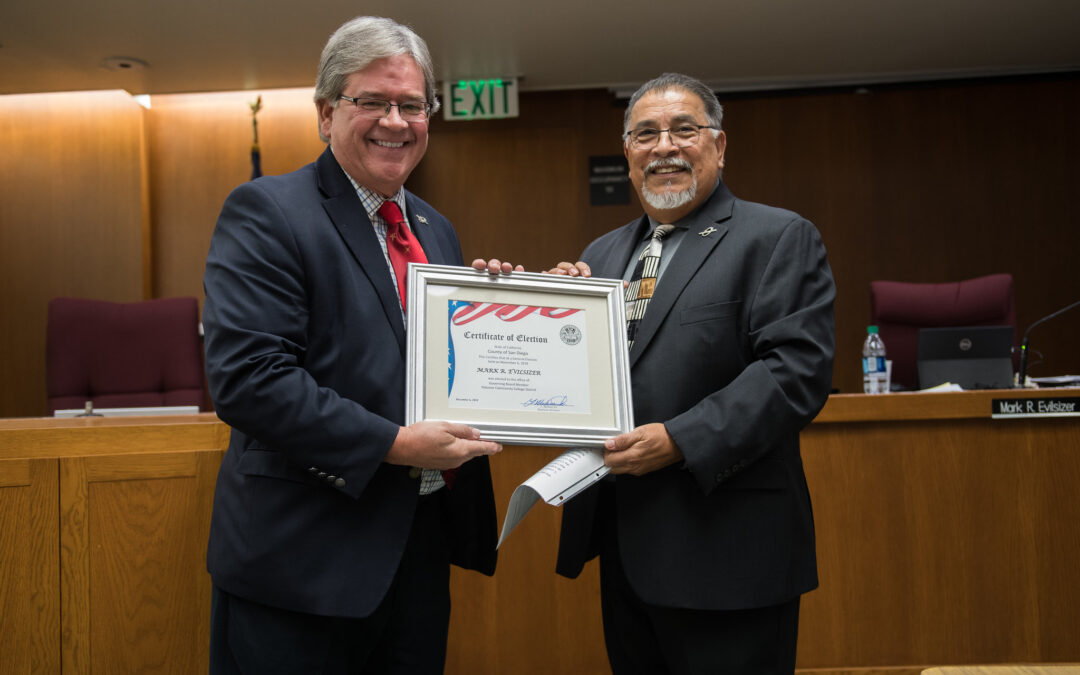 SAN MARCOS — When Mark Evilsizer came to Palomar College, his first experience was not in the boardroom—as so much of his time on campus would later be spent—but in the classroom.

He started as an adjunct professor in 1996, after meeting Palomar’s Dean of Career, Technical and Extended Education, Wilma Owens, at Toastmasters in Vista. Six years later, he ran for a seat on the Governing Board, and won.

“It’s been a real honor and a privilege to serve as a trustee,” said Evilsizer, who will attend his final meeting as a member of the board on December 6. “I had no idea I would serve for five terms when I first got elected.”

Evilsizer’s tenure on the board included periods of historic transformation for one of the largest community colleges in California—and afforded him many opportunities to make a difference.

“Just about everybody’s been impacted by Palomar College in the last 75 years—everybody knows someone with a Palomar College experience,” he said. “The energy behind those stories keeps us at the forefront of education in North County.”

“We are so grateful to Trustee Evilsizer for his unwavering support of this college, our students, faculty and staff, and for many years of steady leadership on the Governing Board,” said Palomar’s Superintendent/President Dr. Star Rivera-Lacey. “We wish him all the best in his retirement, and hope to see him often as a trustee emeritus of this institution.”

The Palomar Community College District is governed by a five-member Governing Board elected to four-year terms by voters in a district that encompasses 2,555 square miles of northern San Diego County. A student elected by the students as the Associated Student Government (ASG) President also serves as student trustee for a one-year term.

Before coming to Palomar College, Evilsizer was employed by General Dynamics Convair in Manufacturing Operations Administration, then changed careers for a time when he began teaching part-time here in 1996. In 2005, he went to work for Northrop Grumman in Rancho Bernardo as an engineering planner, and retired from that company in 2017.

Evilsizer said one of his proudest moments as a Trustee was assisting with the passage of Prop. M, the $694 million bond measure that enabled sweeping improvements at Palomar College.

“That physically transformed the district, from what looked like a 1960s high school campus into the modern-day, almost university-level environment that we have now,” said Evilsizer of Prop M. “It transformed the San Marcos campus, and then allowed us to add the education centers in Rancho Bernardo and Fallbrook to better serve the diverse geographic regions of our district.”

He added: “Prop. M passed by a bare majority—just enough—and historically, this has been a conservative district. I think it passed because we were able to articulate the needs of our infrastructure and our campuses—the need to expand with more centers to serve more students.”

A second point of pride for Evilsizer—going all the way back to his original reason for running in 2002—is that the State of California now provides health care benefits for part-time faculty. It was a step that Evilsizer spent more than a decade pushing for, after helping establish the part-time faculty union at Palomar in 2003.

“Our students do not know the difference between part-time and full-time faculty, so I think it’s fair and equitable that this has taken place recently,” he said.

Third, he said, “Palomar has really embraced diversity, equity and inclusion, and the board has helped by establishing some good policies to support it.”

Early in his tenure as a trustee, Evilsizer was instrumental in the foundation of Encuentros Leadership Academy, which is dedicated to improving educational outcomes for Latino males.

“We need more boys to become successful in their educational paths—even if it’s just getting them into community college and learning a skill,” said Evilsizer. “We have so many great programs in which they can learn a trade or create a business and be successful.”

He said he also cherished the annual commencement ceremony, “because you get to celebrate success with the students and their families.”

As the board moves forward, he said, “I’d like to encourage them to be very cognizant of the needs of our community—not only our students, but also our business and industry representatives. Things evolve so rapidly now—the internet, cybersecurity, unmanned aerial technology—and it’s important for Palomar to keep its thumb on the pulse and adapt to these evolving trends and needs.”

He added: “Ultimately, we want students to be successful in getting a job, starting a career, or going on to receive that higher degree.”

As a long-time leader in North County, Evilsizer summed up his advice to aspiring educational leaders: “Stay humble and pay attention to what students want, what they need, and what they’re saying. The student’s voice is important. And nurture your relationship with faculty and staff.”