For Two Palomar Alumni, a Story Hits Close to Home 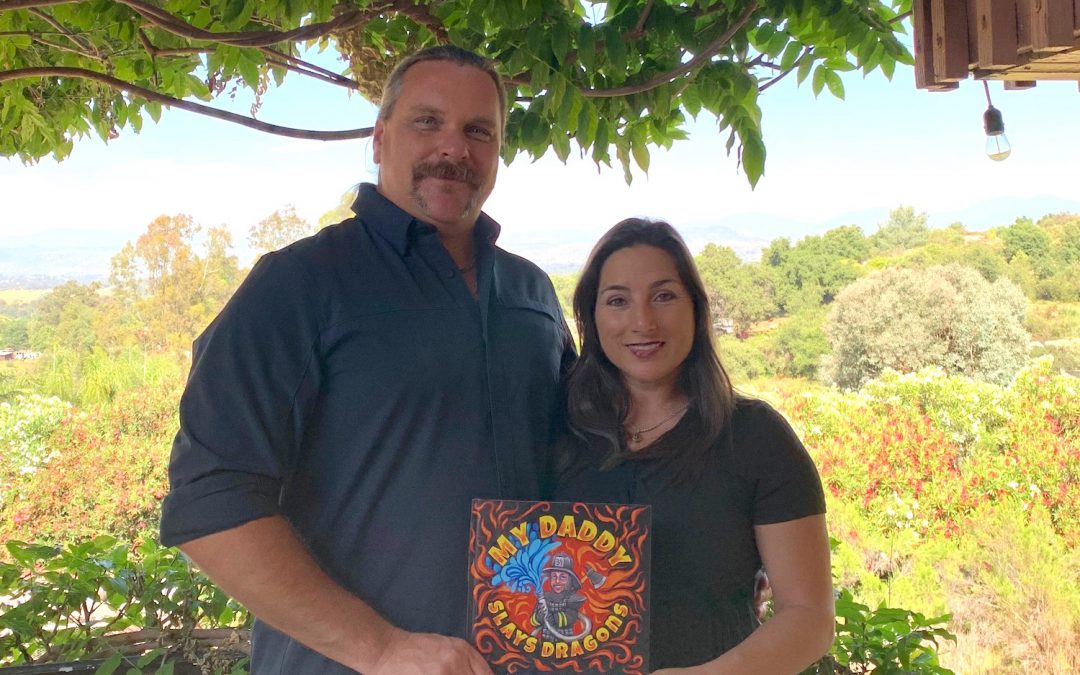 The author of “My Daddy Slays Dragons” and her husband—the firefighter on whose experiences the book is based—both attended Palomar College.

RAMONA — In June 2008, Ehren Kahle left his wife, Stephanie, and two young children at home and loaded up with other members of his fire department for the seven-hour drive north to Oakhurst, where a wildfire was raging just outside of Yosemite National Park.

He would spend the next three weeks fighting fires across Northern California, while Stephanie Kahle, at home in Ramona with their two youngsters, began telling them the story of why their father was away.

That story was recently published as “My Daddy Slays Dragons,” a colorfully-illustrated tale, told from the perspective of the Kahles’ son, Tehran, about the heroes who fight fires.

“I wrote it down as a poem in 2008, and I spent the time since then looking for illustrators,” she explained. “When I found the right illustrator, it just brought it to life.”

Kahle didn’t set out to become a children’s author, but she did study Early Childhood Education (ECE) at Palomar College in the early 1990s: “The teachers at Palomar were great, I loved them,” she recalled. “I wrote a couple of books in my ECE classes, and I remember my professor telling me I had a knack for it.”

The right illustrator for her long-awaited picture book turned out to be a Ramona resident herself—an artist named Karen Riedler: “I know that other firefighters’ kids would love to have something like this, to help them take pride in what their dad does,” said Kahle.

Kahle transferred to Cal State San Marcos, where she completed her bachelor’s degree in sociology. Today, the couple’s children are both studying at Ramona High School.

“Up until we had kids, my job was just a job, but after we had kids and the impact of the things we see and do on a regular basis—especially pediatric calls—took on a different meaning,” he said. “Being gone for long periods of time, especially during fire season, takes homesickness to a whole new level.”

Kahle started his firefighting career at Palomar College in the mid-1990s, “Fresh out of high school and trying to find my way,” he said.

After a friend was injured in a motorcycle accident, Kahle enrolled in a first-aid course at Palomar, which kicked off a series of classes that resulted in his joining the Palomar College Fire Academy and graduating with the 17th Academy in the early 2000s.

He now has 20 years of paid municipal fire service under his belt—including the fateful trip up north which left his family with a legacy in print.

Stephanie Kahle’s second book, “The Stitch Bear,” is due out soon, with an uplifting message “about children finding strength inside of them when they’re going through scary situations.”

Ten percent of the proceeds of “My Daddy Slays Dragons” will go to the San Diego County Burn Institute.