After nearly 40 years on the job, fire captain hangs up his suspenders 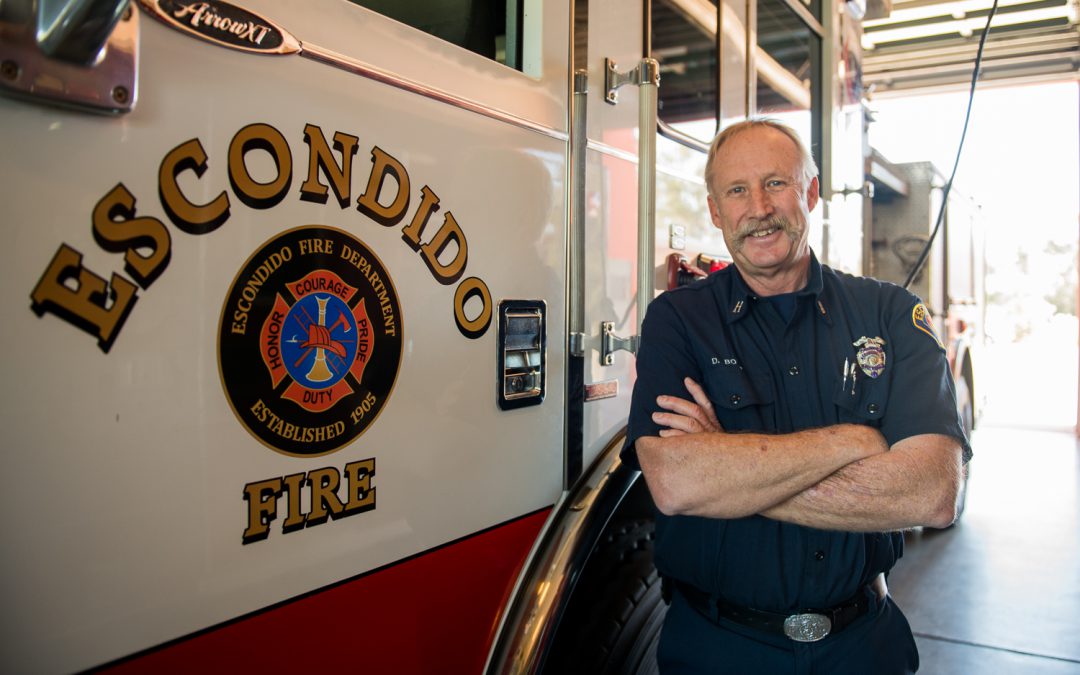 Dennis Boyer is one of the longest-serving instructors in Palomar’s widely celebrated Fire Academy. On Dec. 30, he’ll work his last shift with the Escondido Fire Department.

ESCONDIDO — For 39 and a half years, Capt. Dennis Boyer has spent most of his professional life three minutes away from the action.

Three minutes: that is the response time when a call comes into the station.

But since 1995, when he first started teaching at the Palomar College Fire Academy, the other half of Boyer’s career has been less rushed and more deliberate. Alongside dozens of other veteran firefighters from all over North County who teach at Palomar, Boyer has trained classes upon classes of men and women how to work the fire engines and ladder trucks that would be their daily stock-in-trade.

“The guys I grew up with in the fire service, I’m now seeing their sons in the Fire Academy,” he said.

“My stepson went through the 45th Academy at Palomar,” he added, his mustache twisting into a grin. “That was kind of cool, because it was the only time in his life he had to call me ‘Sir.’”

Today, Dec. 30, 2018, Boyer will clock in for his last shift at Station 3—but even in retirement, his tenure at Palomar College will go on. He will be back next year for another Academy.

During the 2007 firestorm, Boyer was celebrating his wedding anniversary with his wife when he got the call.

“We were at the Chart House, we had just sat down and ordered,” he said. “My wife was looking at the ocean and she said, ‘It’s snowing!’ I said, ‘No, that’s ash.’ She said, ‘You’re going to get called in,’ and my phone rang right then. We cancelled dinner, I got into the station, and at about 4 in the morning, the fire hit Escondido.”

That memory more or less sums up the life of a firefighter: the thrill of battle, the adrenaline of rushing toward an emergency, the feeling of being desperately needed, as well as the sadness of missing out on family life.

That job ends, for this captain, today. But the other—the training of reinforcements to take his place—goes on.

“The thing I’ll miss the most is the camaraderie,” he said. “You spend 24 hours at a time here, 10 days a month, so basically a third of my life has been spent with these guys. They are family.

“The job has been rewarding, and sometimes it just drives you crazy—you see the things people do to themselves, or the reasons they call and you go, ‘This is not a 9-1-1 call.’ But it is the job. There’s never a dull moment. You go from zero to 60 in a heartbeat—you can be here, eating dinner, and the next thing you know you’re running up a mountain chasing a brush fire. Talk about an adrenaline rush.”

Every veteran of the fire service carries a library of memories—some of which they love to tell, and others that will never see the light of day.

Some memories are difficult: Above all, the children they tried to save.

Some are comic: “The dispatcher says the woman on the other end of the line is hysterical,” Boyer recalled. “We get there, it’s an hour before prom, her son has spit gum into her daughter’s hair, and she wants to know how to get it out.”

And others are hair-raising: During the Witch Fire in 2007, Boyer walked around the corner of a house and into the maw of the beast. Pelted by wind-driven pieces of burning coal, like pebbles of fire, he backed up to safety and found his turnouts riddled with charred holes.

But as an instructor at Palomar College, Boyer carries with him another set of memories, pleasant ones, in which he runs into former students on the job. Hundreds of men and women Boyer helped train are now saving lives and fighting wildfires across California and beyond—and he has often reconnected with them in the unlikeliest of places.

“Three years ago, we were up in Kings Canyon on the Rough Fire for two weeks,” he said. “I saw a young man who worked in Fresno, and who graduated from one of our Fire Academies. He walks up and goes, ‘Captain Boyer! I was in the 28th Academy!’”

After numerous such encounters, Boyer said he is proud not only of his work with the Escondido Fire Department, but also of the part he played in developing the Palomar College Fire Academy.

“We’ve built a really good Academy,” he said. “You go to other parts of the state and they’ll say, ‘I’ve heard of Palomar.’”

Boyer is married with three kids and two grandchildren, and he knew he wanted to be a firefighter since he was a boy, riding his bicycle past the neighborhood station near his family’s house in West Covina. One day the crew gave him a tour of the station. He joined the Explorers at age 15 and never looked back.

And, for 23 years now, he has helped mold young men and women with similar stories who turned to Palomar as their path to careers in the fire service.

With a patient manner and decades of wisdom, Boyer has been a student favorite at Palomar, and on a recent Monday night at the California Center for the Arts in Escondido, the graduating class of Fire Academy 54 presented him with an award.

He descended from the balcony dressed in uniform, and as he returned to his seat carrying the decorated oar, Fire Academy Coordinator John Thompson recalled learning from Boyer when he attended Palomar’s 12th Academy.

Boyer started teaching at Palomar in 1995 with the 10th Academy, and quickly found his place teaching the Engine & Truck module.

And, like many other fire officials in North County, Boyer encourages potential recruits to enter Palomar’s Fire Academy not only because it’s local, but because he says it’s one of the best: “Our graduates will say that the reputation of the academy has preceded them, because when they get hired, they’re told, ‘We hired you because you graduated from the Palomar Fire Academy.’”