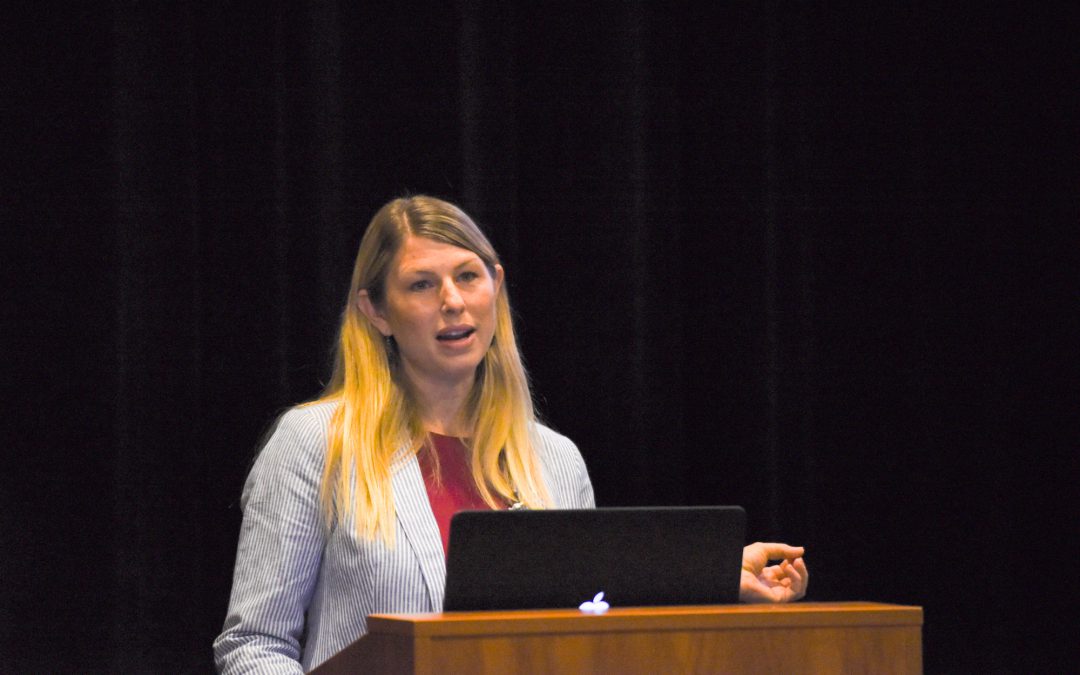 It was de Barros’ idea, in 2007, to begin a series of lectures aimed at exploring the implications of Charles Darwin’s theory of natural selection beyond the biological context in which the theory is typically discussed.

And this week, with retirement looming, he seemed to be enjoying every minute of his final turn as series coordinator.

“Studies show that at least half of the people who come out of high school are seriously misinformed about what evolution actually is,” said de Barros, adding that the purpose of his “Exploring Darwin” brainchild is to answer the questions: “What is evolution? How does it work? What is the importance of the evolutionary perspective?”

Exploring Darwin is modeled after the public symposia hosted periodically by CARTA (Center for Academic Research & Training in Anthropology) at the University of California, San Diego (UCSD). 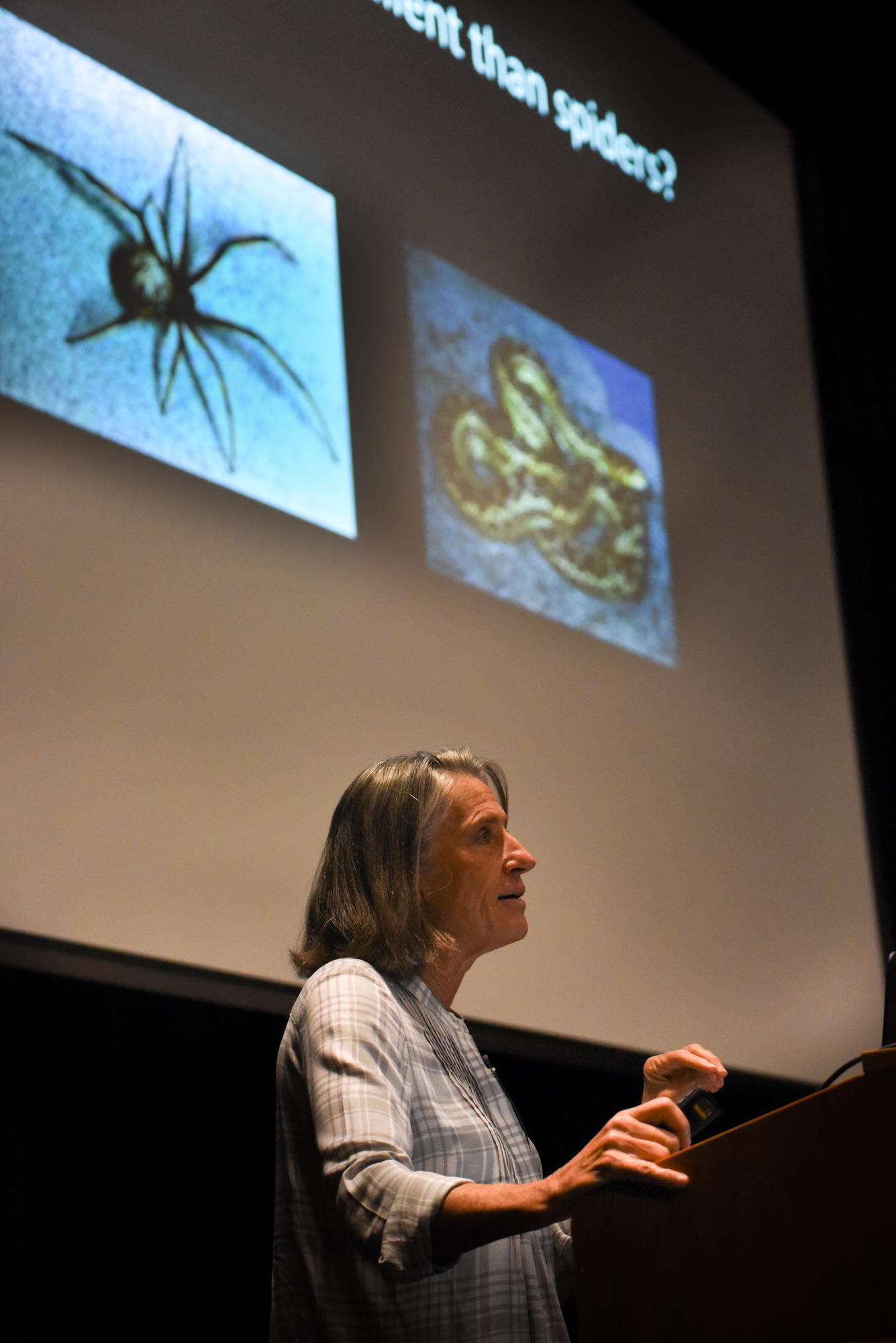 De Barros said he had been taking his own anthropology students to the CARTA talks for years when he came up with the idea for an annual series of eight lectures across two days, hosted right here at Palomar.

“I decided, why not do something to get people more familiar with Darwin’s basic theory of natural selection, and how it applies to a wide range of natural and social sciences, not just biology? I’ve been very pleased with how many people were willing to come and speak.”

Next year, Palomar College Professor Marlo Willows will be coordinating the series, and de Barros said he plans to return as a lecturer.

After more than 23 years of teaching at Palomar College, de Barros is set to retire in December. He said he plans to continue his archeology work in the Western African nation of Togo, where he has researched ancient metallurgy since he was a graduate student.

“In the Bassar region, they had iron metallurgy going back to 400 B.C. It was one of the major iron-producing regions in Africa, and it had very high-quality ores—some of them pure hematite, which means 70 percent iron, and no impurities,” said de Barros. “Even 2,500 years ago, they were making a high-carbon steel. They didn’t understand the physics of it, necessarily, but the edges of their tools lasted a lot longer than just regular iron.”

In addition to authoring books on the topic and helping to train up-and-coming Togolese archeologists, de Barros said he still plans to lead expeditions in the region.

On his most recent trip, he said, “I found an iron smelting furnace dating to 400 B.C., which was quite the ‘Indiana Jones’ moment.”

During the afternoon session on Tuesday, Palomar College Adjunct Professor Mary Ellen Brooks presented her lecture on the biologist Jonas Salk and his predictions of future human evolution.

Brooks’ lecture was a good example of what de Barros has always wanted the series to do: Using Darwin’s ideas as a stepping-off point, Brooks discussed the future adaptations that humans may need to survive after a century of explosive population growth.

Salk discovered the first safe and effective polio vaccine in 1955 and went on to establish the Salk Institute for Biological Studies in La Jolla, where Brooks worked with the renowned scientist for several years.

“He was convinced that the most serious threats to human life and survival were not biological threats,” Brooks recalled. “He believed we were far more likely to succumb to forces at work in our psychological and social natures than to antigens.” 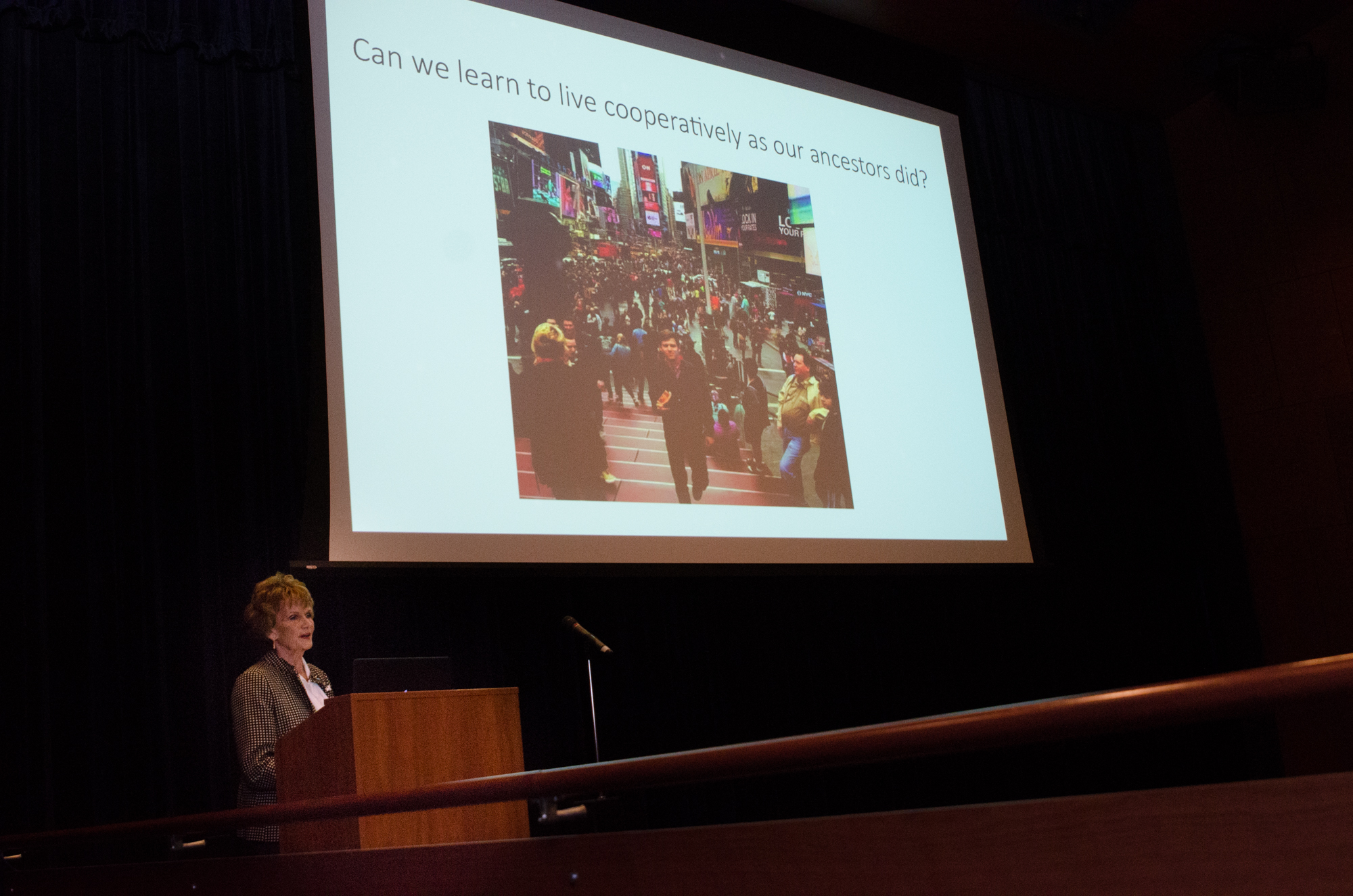 As an example, Brooks highlighted population statistics: In 1960, the year the Salk Institute was founded, the global population stood at 3 billion. In 2017, it’s approaching 8 billion.

“At the time, it was fairly common for people to assume that we were on the fast track to global destruction,” said Brooks. “Salk then wrote a book in which he proposed an alternative way of looking at our future as a species. The theory proposes a more hopeful way of looking at the way we might proceed.”

He predicted that mankind would need to transition into a new “epoch” of human evolution, in which cooperation is valued over competition, quality over quantity, and “survival of the fittest” becomes “survival of the wisest.”

“Even though Salk chose to pursue a career as a biologist who developed medical vaccines and treatments, he felt we needed to spend much more time considering human nature and the possibility that elements in our own nature need some careful consideration,” Brooks concluded.

This year, students and members of the community were treated to the following presentations: