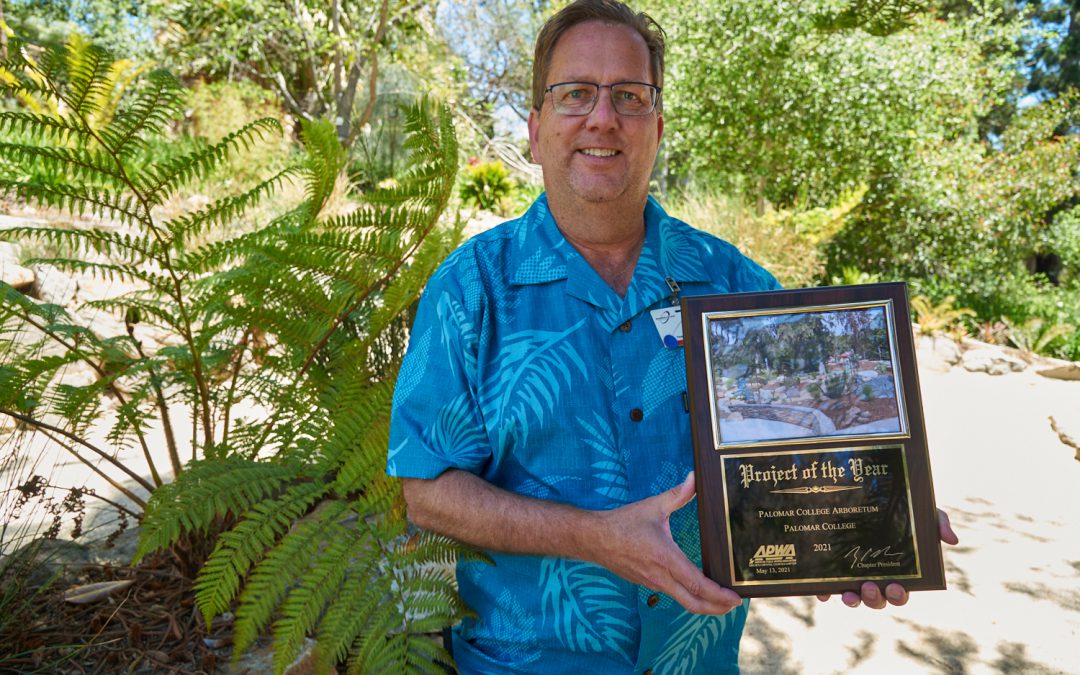 Upgrades to the 10-acre preserve were completed in September 2019. Two organizations have since recognized the project, one as “Project of the Year.”

SAN MARCOS — The Edwin & Frances Hunter Arboretum, a 10-acre preserve that was renovated in 2019 to include ADA-compliant walking trails and water-saving irrigation, has won a pair of awards from regional associations recognizing the arboretum’s new features.

The improvements were named “Project of the Year” among parks under $2 million by the San Diego and Imperial Counties chapter of the American Public Works Association (APWA).

Dennis Astl, the college’s Manager of Construction and Facilities Planning, said the two main goals of the project were to make the arboretum—founded in 1970—more accessible, and to improve the irrigation system with low-flow components.

“Originally, the trails in the arboretum were hand-cut pathways through the brush, with steps made out of railroad ties or rock—no handrails, nothing like that. It was really kind of overgrown and hard to maneuver around,” said Astl. “So the first step was to make it truly accessible to everyone.”

The project took six months to complete and the arboretum was reopened with a ceremony on Sept. 26, 2019. The vast majority of the arboretum’s trees and plants—spanning more than 600 species—were undisturbed.

“We’re thrilled to receive this recognition for a space that enhances our campus with its natural beauty—and is now much more accessible to anyone who wants to visit,” said Interim Superintendent/President Dr. Jack Kahn.

The arboretum is named for North County business leaders Edwin and Frances Hunter, long-time supporters of the college. In 2015, the Hunter family and Hunter Industries donated $500,000 to the Palomar College Foundation to establish an endowment to ensure the maintenance of the arboretum in perpetuity.  The improvement project was funded by Prop. M, the $694 million bond measure approved by voters in 2006.

Astl said an early version of the design was cost-prohibitive and included a “a lot of concrete, a lot of stairs, and a lot of concrete retaining walls. So we said, ‘Let’s take another look at this. If we have an ADA path, we don’t need any stairs. And let’s use more natural materials for our retaining wall system.’”

The result, Astl said, is a blend of natural materials, sourced on site, that enhances the visitor’s experience of the preserve’s natural beauty without intruding: “Those changes really brought the cost more in line with what we had available, and it resulted in a more natural feel than if we had put concrete everywhere.”