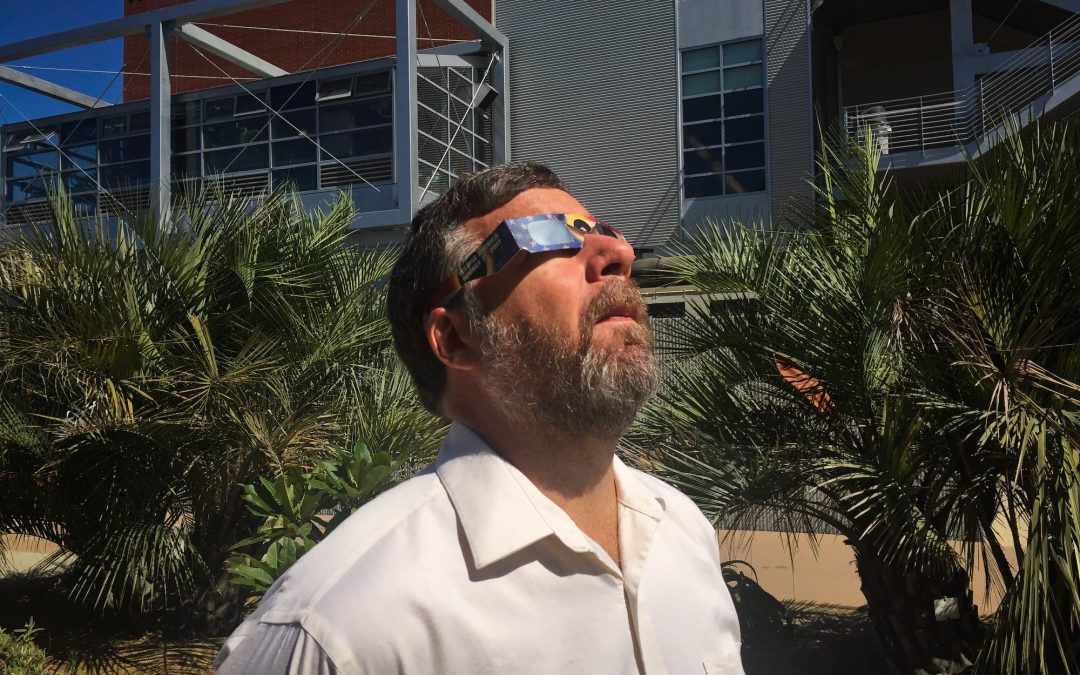 Palomar College professors Mark Lane and Scott Kardel, who teach astronomy and oversee the Planetarium, will experience their first total solar eclipse on Aug. 21 after a lifetime of studying the stars.

SAN MARCOS — By mid-morning on Monday, 950 miles away from Palomar College and the first day of school, Mark Lane and Scott Kardel will be standing in the shadow of their first total solar eclipse.

If all goes according to plan, the two Palomar College astronomy professors will spend the opening day of the fall semester in Menan, Idaho, where they plan to crowd into the so-called “centerline path” of the eclipse as it sweeps across the U.S. from Oregon to South Carolina.

They will join millions of other Americans jostling for a glimpse of what many eclipse chasers describe as a spiritual event. When the full diameter of the sun is blotted out, they say, nocturnal insects start chirping and a few of the brightest stars become visible in midday.

“We’re fairly certain the public doesn’t understand is how incredibly rare this is—to be able to see a total solar eclipse,” said Lane, who has taught astronomy at Palomar for 20 years and has served as Director of the Planetarium since 2003.

The climax of the eclipse only lasts for two minutes and 20 seconds, but, Kardel said, “In my mind, this has been coming for a long time.”

Update: Read Kardel’s reaction to witnessing the eclipse and view a slide show of Lane and Kardel’s photos at “Scenes from the eclipse.”

Dreaming of a particular shadow

The day of the eclipse should go about like any other momentous occasion: a slow build-up followed by a few moments of nirvana as the dark circle of the moon completely covers the flaming circle of the sun.

Scott Kardel has been anticipating those 140 seconds since he was a boy.

Kardel was in high school in February 1979, when the last solar eclipse in the continental U.S. swooped across the Northwest—including Portland, Ore., where it was hidden behind clouds.

“I was desperately sad that I couldn’t travel to the Pacific Northwest from my home in Arizona to see the eclipse,” he recalled. “I remember I stayed home from school that day, with permission from my parents, and used my telescope to look at the partial eclipse that you could see from Tucson. It seemed close, but really far.”

Twelve years later, another total eclipse cut across Hawaii and then Mexico, “but that was a month and a half after the birth of my daughter. I just couldn’t get away. So that one sort of came and went. But there’s always been 2017, which seemed like this futuristic time for years—this coming eclipse that would be going all the way across the United States.”

At Palomar, Kardel met a fellow eclipse enthusiast in Mark Lane, who had also been looking forward to the spectacle for years: “After landing here at the college, I realized, of course, I’m not alone—this is an interest of Mark’s as well, and we needed to find a way to do this.”

“Momentous” is almost too mild of a word to describe this eclipse in the minds of astronomers—professional and otherwise—across the contintental U.S.

Lane, for example, is taking an academic sabbatical for the fall semester in large part to be able to travel to Idaho and capture images of the event. And he has spent months preparing his equipment and himself for the occasion.

“It’ll be about three hours’ worth of video and photography, start to finish,” he said. “The sun, during an eclipse, is a very complicated thing to photograph because it changes its brightness dramatically. And you only get one shot at it.”

As part of his sabbatical, Lane is driving all the way to Idaho and back. But Kardel has classes to teach.

“We’re flying in and out of Salt Lake City, driving up to Idaho,” said Kardel. “After the eclipse, I’ll hop in the car, deal with traffic, and then fly out that night to teach at 8 a.m. the next morning.”

For both men, there are personal and professional motivations behind the trip.

“I hope to be able to give my students a much more personal experience of what it’s really like,” Kardel said. “It’s one thing to say, ‘Well, the moon blocks the sun and it gets dark out.’ It’s another to be able to describe, literally, how does that feel? The senses you have.”

For his part, Lane has seen a 90 percent eclipse, “but there’s a big difference between covering most of the sun and the few minutes of covering it completely,” he said. “Those who see one say you’ll never forget it. And they say you’ll spend the rest of your life trying to see another one.”

During Monday’s eclipse, the darkness of “totality” will only occur along a 100-mile-wide path. For those who are not leaving North County on Monday, a little less than two-thirds of the sun will be eclipsed by the moon.

“It’s a nice partial, by all means,” Lane said of what the event will look like from San Marcos. “But if you don’t have some sort of protection to look through, it’ll look like any other day. You won’t even know it’s happening. The sun is that bright—you can cover half of it, and it will still feel like any other day.”

The eclipse will begin around 9 a.m. and reach its peak at 10:23 a.m. In San Diego, the Fleet Science Center is holding a free viewing event, and there are a couple of cheap ways to watch the celestial drama unfold.

“If you have eclipse glasses or an eclipse viewer, that’s great,” Kardel said. “But the easiest and safest method is to try to project an image of the sun. That’s done very, very simply by poking a hole in a piece of cardboard or poster board and projecting an image of the sun underneath.”

Next Monday’s astronomical phenomenon is scheduled to begin in San Diego shortly after 9 a.m. and reach its height at 10:23 a.m.

Despite the limitations, Kardel said, “If you can get outside and see some of it yourself, I really suggest doing it.”

The next 10 total solar eclipses: