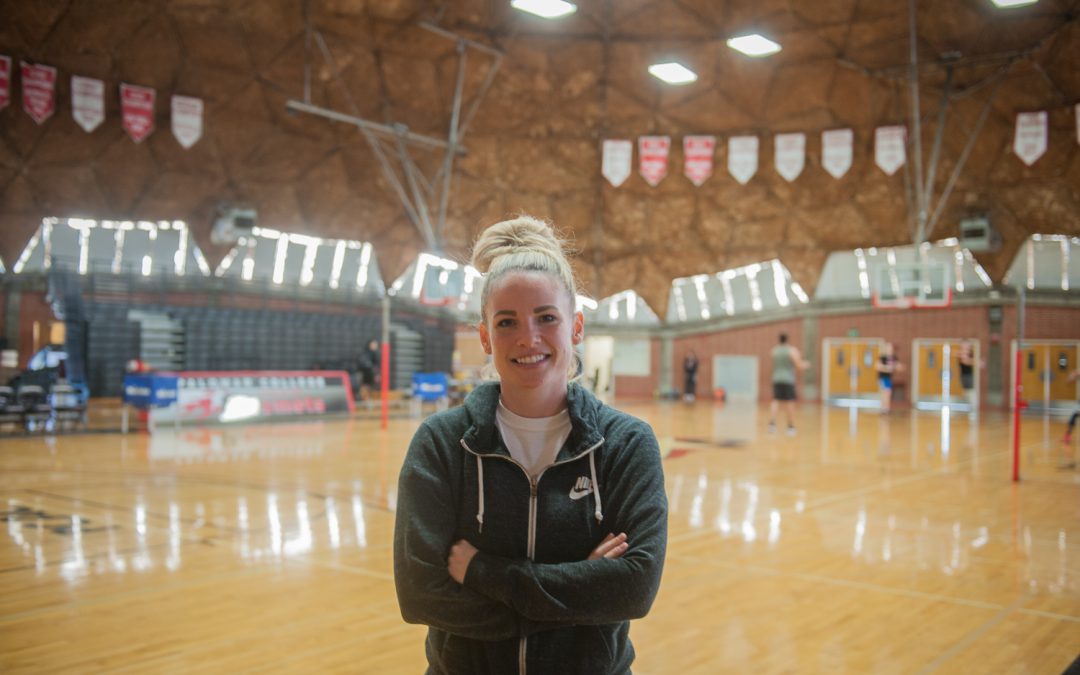 Named PCAC Coach of the Year for the fourth time in six seasons, Leigh Marshall and the top-seeded Comets have worked hard to stay on top.

SAN MARCOS — Twenty-eight and one.

Twenty-eight times this season, Leigh Marshall’s basketball team walked off the court with a victory, and only once did they come back to Palomar College with a loss (but they also beat that team, Mt. San Jacinto, twice).

For their efforts, the women’s basketball team went into the postseason as the top-seeded team—and along the way, earned Marshall her fourth title as Coach of the Year in the Pacific Coast Athletic Conference – North (PCAC).

That’s the way she tells it, at least.

“I feel like it’s a team award,” said Marshall during a recent interview. “They’ve earned it for me. If they weren’t working the way they work and they weren’t successful, I wouldn’t be Coach of the Year.”

Marshall’s office at Palomar is around the corner from The Dome, where her team has consistently dominated its opponents during the eight seasons she has been coaching the Comets.

The squad will light up The Dome again on Saturday, March 3 for their Sweet Sixteen game against Moorpark. The game starts at 7 p.m. and the winner will advance to the Elite Eight, which will be held this year in Ventura.

On Marshall’s desk stand a collection of first-place trophies—she said she doesn’t keep the second-place awards—and it wasn’t clear how she would fit her fourth Coach of the Year plaque into the crowded awards cabinet nearby.

Taped to the wall was a note from a former Comet, Aleijah Tomlinson: “Dear Coach, I love you. Remember to smile and have a good day!”

“That was my starting point guard, Aleijah Tomlinson, who came to us from Los Angeles after she moved in with her dad in Ramona,” Marshall recalled. “She was really raw but she practiced every day, she just really worked, and she earned a scholarship out of here.”

Marshall grew up in Costa Mesa and then played basketball for Orange Coast College, where, during her sophomore season, she was the team captain when the Pirates won the only state women’s basketball title in the school’s history.

Even then, she knew she wanted to coach basketball: “I was realistic about what I was. I mean, I love the game. But I’m 5’4”. I was just fast, I was a scrapper and had a high basketball IQ.”

She spent five years assisting her former coach at Orange Coast while earning her bachelor’s and master’s degrees in kinesiology. Then she came to Palomar, where the women’s basketball program needed serious help.

Asked about her team’s consistent success, Marshall said, “Our culture is about being a hard worker—to get out there and grind. We don’t treat ‘em like girls, we treat ‘em like basketball players. Mental toughness is huge for us. Toughness and hard work have a lot to do with it. A lot of times we ‘tough’ our way to wins.”

For Marshall, the rewarding part is watching her players develop during their time at Palomar.

“We’ve had 30 sophomores in the past five years, and 25 have received scholarships to move on and play basketball at the next level,” she said. “It’s extremely rewarding to watch our kids (go on). That’s why they come here, if they’re serious about basketball—to go to the next level. To watch them do that is definitely what I’m most proud of.”