Comets guard perfecting the art of the long shot 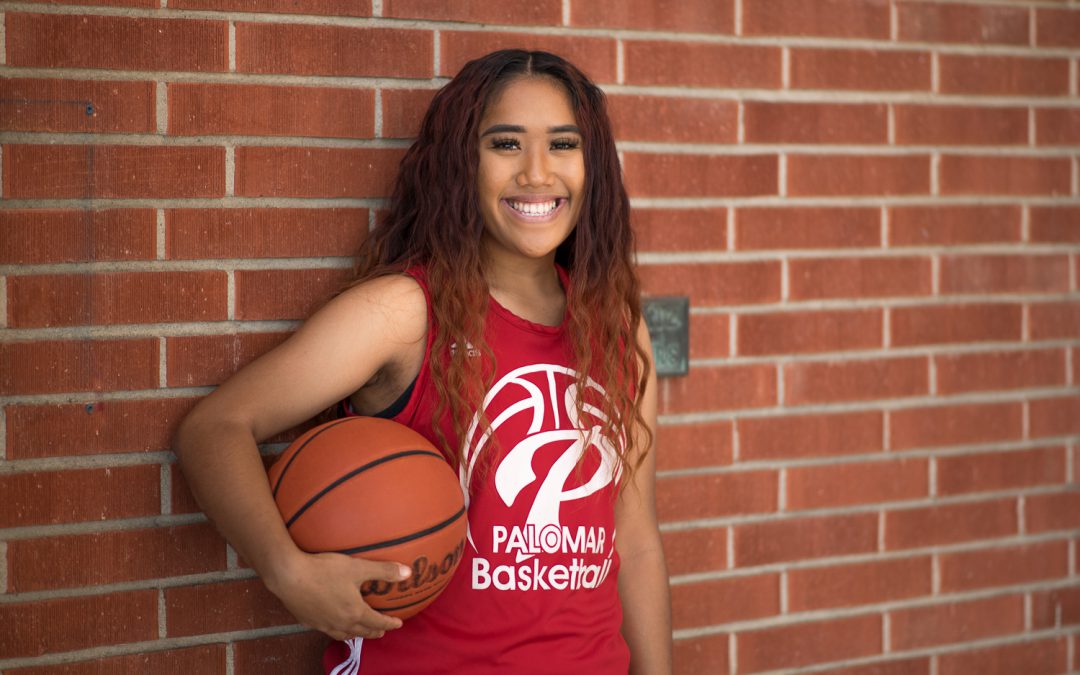 “Palomar made it possible for me to pursue my goals on and off the court.”

SAN MARCOS — On a recent Friday night at Grossmont College, Julie Saelee played the game of her life so far with the Palomar Comets basketball team, sinking 36 points and setting the school record for most three-pointers in a game.

Her nine long shots that night eclipsed the previous record of seven and helped boost the team to a stunning 90-20 victory.

For Saelee, the game was as real as it gets: feet on the court, lungs working overtime, pushing her muscles and her senses to the limit.

But it was also—as basketball always has been for her—a means of escape, of rising above the stress and struggle of life.

“Basketball takes me to a different place,” said Saelee, 20, during a recent interview on  campus.

Growing up, she recalled, “Whenever I was going through something or feeling down, I would go to the gym to get up shots. Even coming to practice, it just took a lot of things I had going on at home off my mind. When I played, I would forget what I was upset about.”

Originally from the Sacramento area and one of 12 siblings, Saelee grew up in foster care. She started playing basketball in the sixth grade and played throughout high school, even though her team was less than stellar.

As a teenager living in a group home, she met a staff member who used to play for Palomar College.

“I told her, ‘I want to get out of Sacramento and do something different.’ So she helped me reach out to Coach Marshall, and we actually went to watch the team play when they came up north,” Saelee recalled.

That was the first time she met Marshall, who has twice been named California State Coach of the Year—in 2015 and ‘17—and is a five-time Pacific Coast Athletic Conference – North (PCAC) Coach of the Year.

“Julie is a tough-as-nails kid whom I’ve watched grow tremendously over the last three years, in both her physical and mental makeup,” Marshall said. “She’s someone you look forward to seeing every single day because she always has a great attitude, a smile on her face, and she comes to work hard.”

In 2017, three months after graduating from high school, Saelee moved to North County with her twin sister to play basketball at Palomar. Her sister moved back to Sacramento at the end of the year, but Saelee stayed.

“Growing up, I was always on my guard. It was hard to trust people. When my sister left, that’s the first time I really felt alone, because we were together for 18 years,” she recalled. “I had to find a way to get back on my feet.”

Once again, it was basketball that came through for her. The women’s basketball team at Palomar is consistently one of the best in the state, and it was not a given that she would make the team. She took a year to practice and study Marshall’s approach to the game, and then in 2018 made her college debut.

At 5’3”—one of the shortest players on the team—Saelee refers to herself as a “dirty worker,” and describes her typical game as “getting the hustle plays and doing the hard work.”

Marshall said: “Julie is an amazing teammate who cares about our team’s success over everything else. To say that I’m proud of her and the growth she has had would be an understatement. She is the epitome of our Comet Culture, which is a blue-collar work ethic married to indomitable will.”

As a shooting guard, she has left her mark with numerous double-digit-scoring games this season; she is also known for her momentum-shifting steals. Two weeks after her breakout game at Grossmont, she was still glowing from the experience.

“It was a really fun game to play,” she said. “The whole team was hyped up, the energy was awesome, and everyone was working together.”

In the classroom, Saelee is pursuing her associate degree in Social and Behavioral Sciences, with plans to become a nurse. When she leaves Palomar, it will be to transfer to a four-year university and become the first in her family to earn a bachelor’s degree.

However, she admits, she doesn’t know where she’ll end up. Basketball will determine where she goes from here.