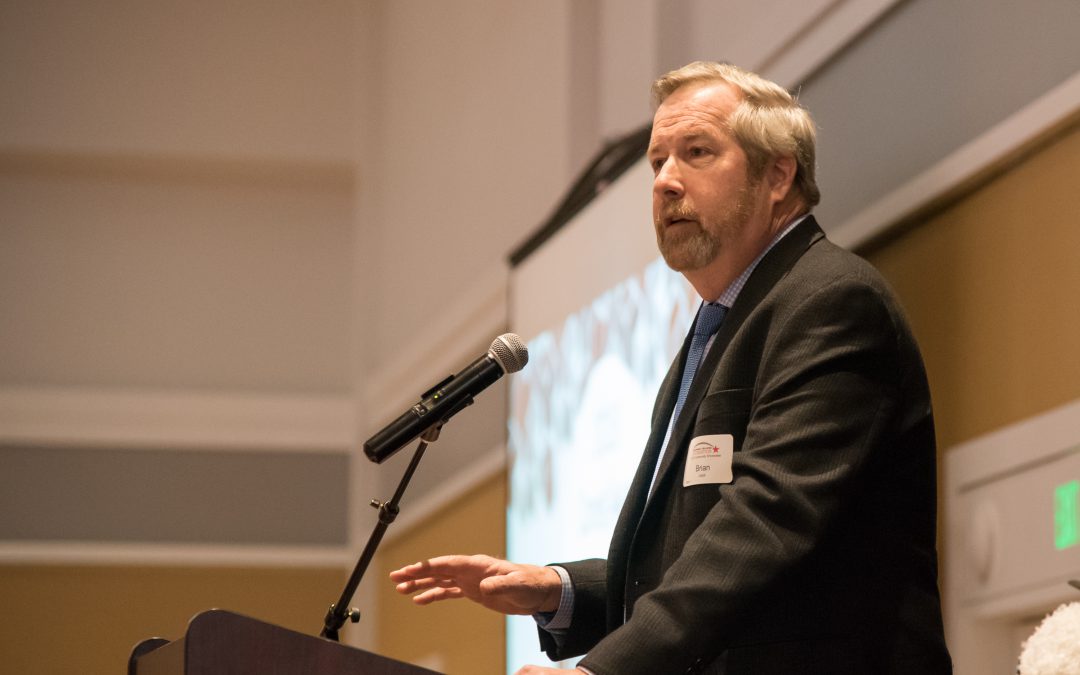 ESCONDIDO — As a business leader, Brian Cahill has left his mark on the physical landscape of Southern California like few others have: at Palomar College alone, he was involved in the construction of the Humanities building, the rebuilding of the Howard Brubeck Theater, and the access road and temporary campus in Fallbrook.

During Palomar’s Community Showcase on Dec. 12, Cahill, the California Division President of Balfour Beatty Construction, received the 2019 Comet Award for his philanthropy on behalf of the Palomar College Foundation.

“I came to California in 1982 as a veteran—I spent five years in the Navy, I had a Vietnam-era GI Bill in my pocket, and … after five years, I was ready to go back to school,” Cahill recalled in his acceptance speech.

He shared that enrolling in a local community college helped him make the transition from military to civilian life, and added that he counts Palomar’s 4,300-plus military-affiliated students among its most significant impacts in the region.

Cahill is an experienced deep sea diver and pilot, and lives in Valley Center. As a philanthropist, he helped coordinate the construction of the new Ronald McDonald House at Rady Children’s Hospital in 2008, later joining the Board of Trustees and serving as Chair. His efforts have also greatly benefitted Junior Achievement of San Diego and Imperial Counties, an organization that prepares young students to compete in a global economy, understand business, and pursue entrepreneurship.

“It would be difficult to overstate the impact of Brian’s philanthropic engagement in San Diego County,” said Stacy Rungaitis, Executive Director of the Palomar College Foundation. “At Palomar, we have been extremely fortunate to have Brian involved in the Foundation for over a decade. During this time, Brian started and has continued to help build the annual President’s Invitational Golf Classic—the Foundation’s largest fundraising event every year.”

As a leader on the Foundation’s Golf Committee, Cahill has helped raise more than $1.5 million to benefit students through scholarships, textbook assistance and emergency grants.

“There are a lot of golf tournaments in San Diego County. There are not many that raise close to $250,000 per event,” Cahill said, honoring the dozens of people in attendance at the Dec. 12 event who have also participated in the annual golf tournament.

Balfour Beatty Construction is ranked as the fifth largest educational builder in California. Managing more than $650 million annually, the company’s California Verticals Division has over 300 employees and has helped overhaul campuses across San Diego County.

Cahill is currently leading planning and pre-construction for the next phase of Palomar’s Fallbrook Education Center project off Interstate 15 in Fallbrook.

Concluding his acceptance speech at the California Center for the Performing Arts in Escondido, Cahill recalled a recent trip to Pomerado Hospital to pay a visit.

“I noticed that the nurse was just great. I said, ‘Where did you get your training?’ and she said, ‘Palomar College.’ On another visit, I was in the elevator with two nurses and I said, ‘Where did you get your nursing education?’ Again, they said, ‘Palomar College.’ I live in Valley Center, this is our local college, and it is a very important institution in our community.”