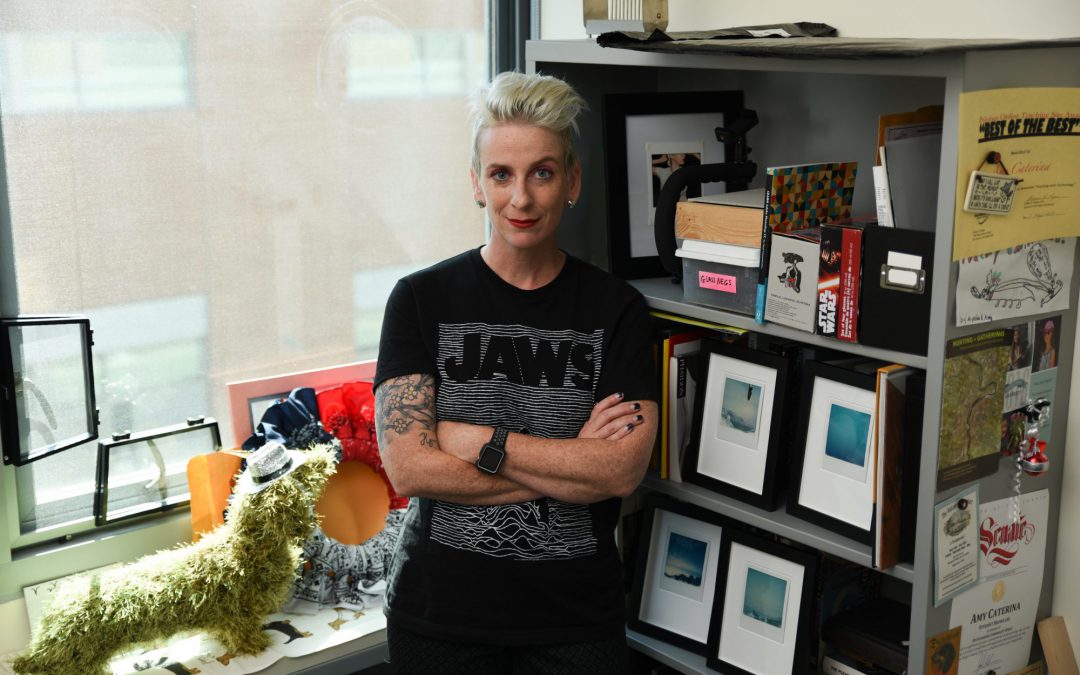 Amy Caterina went all the way to Iceland to bring home a pair of Polaroids on display Oct. 27-29 in Medium Festival of Photography’s “Size Matters” exhibition.

SAN MARCOS — When the photographic elite of San Diego descend on Bankers Hill for the Medium Festival of Photography on Oct. 28, two of the images on the wall will be staring back from a winter landscape in Iceland.

That’s where Palomar College photography professor Amy Caterina found herself in January, Polaroid camera in hand, trying to capture the snow and the mountains and the fjord at her feet.

“I don’t think I’ve ever been so fearful,” she recalled. “I’d never travelled internationally by myself before. And then I had to go make pictures—good pictures, because I’d paid all this money to get there, and people had helped me. So there was the pressure. It was the hardest thing I’d ever done.”

After being accepted for a two-week artist residency at a retreat known as the “Fish Factory,” Caterina traveled not to Reykjavík, the capital of Iceland, but to the tiny fishing village of Stöðvarfjörður on the opposite side of the island.

“It was the most insane thing I’ve ever done,” she said, shaking her head in disbelief. “Twenty-two hours of darkness every day. This place humbled me. I think a lot of my stuff just came out of being completely freaked out by the landscape.”

Before departing sunny San Diego, Caterina had packed her 35-year-old Polaroid camera and five packs of eight exposures. In the age of digital photography, when most photographers would take thousands of images during two weeks in an exotic place, 40 pieces of film seem severely minimal—and sure enough, Caterina ordered more film from Reykjavík.

But then she came home with a set of images that are full of unexpected colors and forms, and distressed by her aging camera in startling and unique ways.

Two of the exposures were good enough to earn coveted wall space in the “Size Matters” exhibition this weekend.

A special exhibition held during the Medium Festival of Photography, Size Matter is being held at Helmuth Projects in Bankers Hill, with an opening reception on Oct. 28 from 7-10 p.m.

Curated by Katherine Ware of the New Mexico Museum of Art in Santa Fe, the exhibit features work smaller than 10 inches. Caterina’s Polaroids easily qualify, condensing the vastness of a snowy Icelandic landscape into a few square inches. 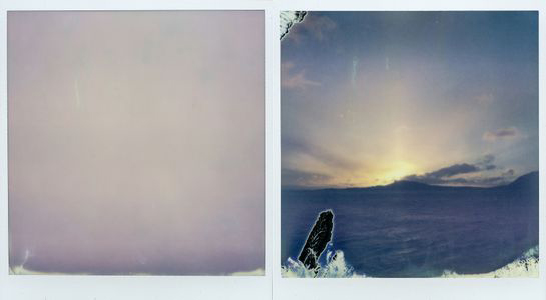 The two images from Iceland that are featured in this weekend’s “Size Matters” exhibition, courtesy of Amy Caterina. Portrait of Caterina by Melinda Finn.

“I work very small, because I like people to view my images one at a time,” she explained. “I do like controlling how close you have to get to my work.”

Donna Cosentino, chair of the Photography Department at Palomar College, said, “I’m ecstatic that we have Amy. She’s done some amazing things, and we’re very lucky to have her.”

Caterina is funny and engaging and seems optimistic in a way that belies some of the difficult life she has lived. But her work is charged with emotion. As Cosentino put it, “Amy’s work is about who we are in this place—it’s about how humans exist on a day to day basis.”

Photographers are always talking about light, but Caterina said being in Iceland in the middle of winter presented unique challenges. She likened it to the renowned architect Frank Lloyd Wright “consulting the light” before designing “Fallingwater,” one of his most famous pieces.

“That is exactly what I had to do in Iceland, because when you’re there in January and you get an hour and a half of light, you’re not in charge any more,” said Caterina. “It’s completely different than being in California, where it’s like living on the sun.”

Artistically, the experience in Iceland was transformative for Caterina. She says she can sense that it was a turning point.

“I was like, ‘I’ve got to get out of here, this is so isolated,’ and then I ended up making some of the most amazing things—pictures that I know, for me, are pivotal. There was a change,” she said. “When I left, I put a down payment on going back this year. Everyone was like, ‘Are you nuts? While you were gone, all we heard was how dark and cold it was.’ But that’s how I am—if I respond that viscerally to something, bad or good, it means I love it.”

She will return in June, when the sun will be shining 22 hours a day. She expects this to be similar to the challenges presented by winter in Iceland.

“I’m not a huge fan of the sun. I’m covered all the time, I don’t turn on any lights, my dream house is a bunker,” she said with a laugh. “I think the sun’s going to drive me mad, but it’ll be great. You can do anything for two weeks.”

This time, she wants to meet more of the people in Stöðvarfjörður and take pictures of them.

“I’m going to bring all my Polaroids,” she said, “and I’ve already started stocking up on film.”