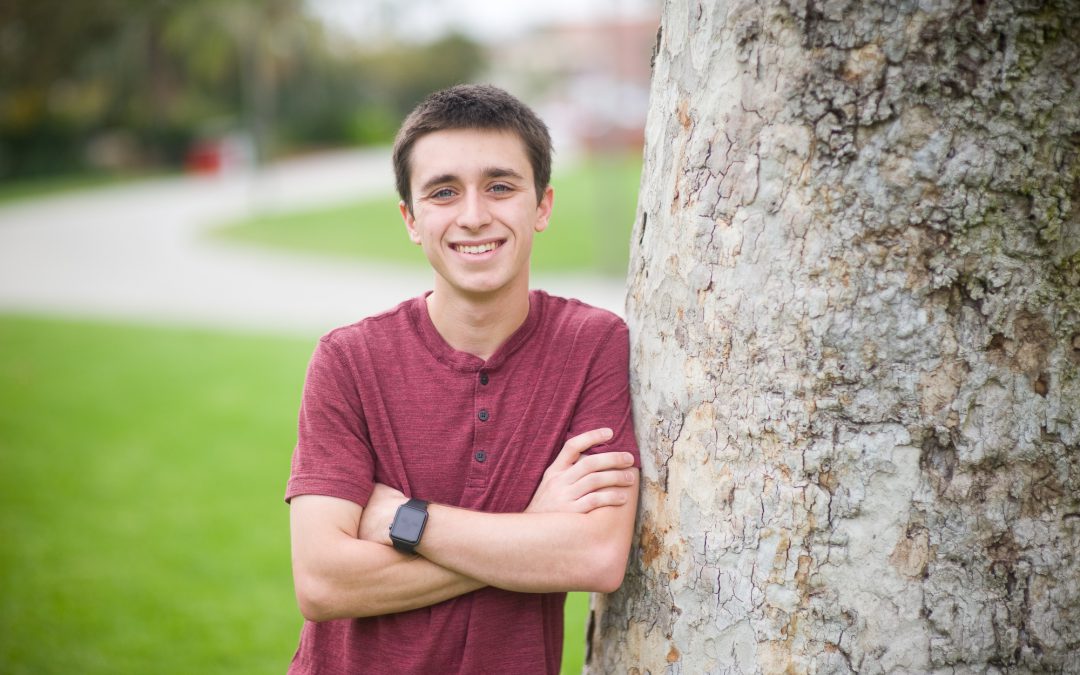 Sammy Cuomo always knew he wanted to work in television. After graduating from Palomar with a degree in Media and Communications, he is on his way.

SAN MARCOS — From an early age, Sammy Cuomo was the type of kid who would reenact scenes from his favorite cartoons for his family. He seemed destined for television.

“I liked attention, I guess that’s how it started,” he recalled. “What intrigues me is story and emotion.”

By the time he graduated from Palomar College this summer, he was on his way as a member of the production team at KOCT in Oceanside.

Cuomo, 20, now attends California State University San Marcos (CSUSM) after earning his A.S. in University Studies with an emphasis in Media and Communication from Palomar. On a recent afternoon, he recalled how his childhood obsession took on a new shape when he discovered the film and television program in high school.

At Mission Vista High, he hosted a monthly broadcast and began learning the technical skills that he would later strengthen as a student at Palomar.

Lisa Carmichael, a faculty member in the Digital Broadcast Arts (DBA) program, said that dozens of graduates like Cuomo have made their way from the college’s studios and editing rooms into industry jobs.

“That is what we’re known for, actually—students being able to get jobs after they’ve completed the program here,” said Carmichael. “We frequently have students who are literally hired out of the classroom.”

Besides KOCT, she said the program has seen several of its recent graduates hired by KUSI, with others in coveted positions around the country.

“One of our former students is working as an on-air reporter at a TV station in El Paso, Texas, and (another) is an anchor with the Fox station in Las Vegas,” said Carmichael, adding that yet another graduate “is in Tokyo and just got her first job as a production assistant at a TV station in Japan.”

Cuomo said he didn’t set out with a career path in mind, but that Palomar’s DBA program prepared him for the position at KOCT, which began last year as an internship. Now, as a Communications major at CSUSM, he said he is looking forward to a full-time job in the television industry.

“Personally, I enjoy it more when I’m in front of the camera than when I’m behind it, but I don’t mind doing behind-the-scenes stuff,” he said, adding that he would prefer to work in live TV, perhaps because of the added challenges of a real-time production. “Everything has to be done perfectly at one time.”

That hands-on experience landed him behind the switchboard during KOCT’s live coverage of Oceanside City Council meetings earlier this year; anyone watching a council meeting from home was in Cuomo’s hands as he toggled between cameras in the room.

From his time at Palomar, he said he distinctly remembers walking into the Prep Sports Live editing room, seeing an array of awards on the wall and thinking, “This is incredible.”

“If you live in North County and you want to experience broadcasting, Palomar is definitely the way to go,” Cuomo said. “They have the equipment, the studio, the professors, the experience, the awards. It’s mind-blowing.”

Carmichael added: “Students know we’re a place where they can get relevant, hands-on training—where they’re producing a real newscast, they’re doing a morning talk show, they’re producing Prep Sports Live. They have opportunities to gain real-world experience, and I think that’s a huge strength in our program.”