The Journalism Department has amazing students. Here is a (partial) list of their accomplishments:

On April 3, 2018 we learned that Palomar’s Journalism students had won the following awards” 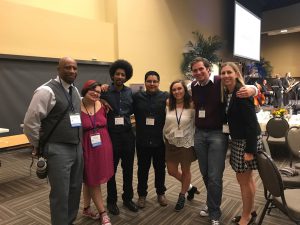 Distinguished Faculty of the Year

A home with wheels

Third party picks up the Bernie or bust

Bring concussions to the light of day

We have some questions about new calendar

Here is a press release on our students’ statewide award. 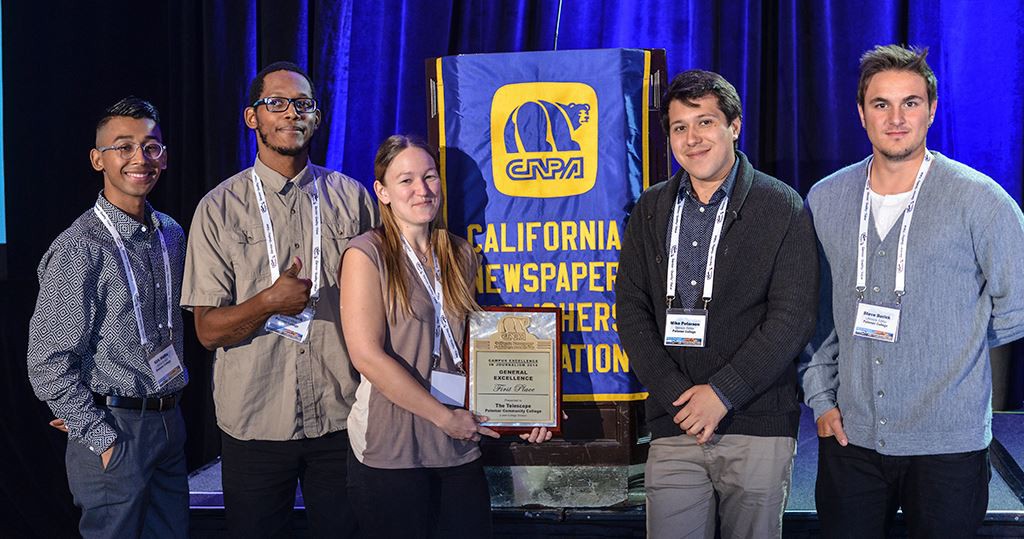 CORONADO, Calif., May 9 ­ Palomar College¹s campus newspaper staff beat out two-year colleges from across the state to win First Place in General Excellence from the California Newspaper Publishers Association.

Seven members of the newspaper staff attended an awards banquet at the Hotel Del Coronado to accept the plaque.

The student-run, independent newspaper competed against about 35 campus newspapers that entered nearly 500 entries, according to CNPA Spokesman Bryan Clark.

The campus newspaper was featured in CNPA¹s The Winners Tab newspaper with a comment from the judges.

³This was a wide-ranging, exciting paper for a student community,² the judges wrote. ³The writing was consistently exceptional! We see the good editing, and the graphics were superb.²

The Telescope newspaper is a biweekly publication that produces Palomar-related news, sports, opinion and arts coverage during the fall and spring semesters. It has been covering Palomar College for around 65 years. It also has an active website at www.the-telescope.com and a new app called Telescope News that is available through the Apps Store.

Palomar¹s awards were part of a larger CNPA contest for daily and weekly newspapers across the state. A total of 175 CNPA-member newspapers entered the contest in 11 circulations divisions and 29 categories. The total number of entries was nearly 4,000, Clark said.

Our student newspaper and student magazine both won Best of Show at this year’s San Diego County Fair. 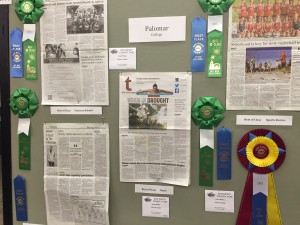 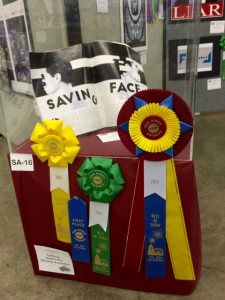 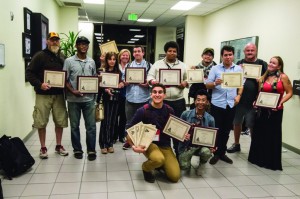 News coverage about The Telescope.

Check out UT-San Diego news coverage about our program.

Here is a student, David Krueger, a Telescope staffer who won at the Society of Professional Journalists in the summer 2013.

Palomar College’s journalism students earned 20 awards at a state-wide community college journalism convention this weekend, including the coveted Pacesetter award, which was received by only four schools.

The Journalism Association of Community Colleges organization hosted its annual state convention April 11-14 at the Double Tree Hotel in Sacramento. Over 41 schools were in attendance with about 500 delegates.

Eleven representatives and two advisers from the Telescope, the college’s newspaper, and Impact, the college’s magazine, attended the convention, participating in competitions, workshops, critiques and networking.

The Telescope received General Excellence for both print and online. It also won first place for Front Page Layout, Informational Graphic and Enterprise News Story/Series, with a third place Editorial and second place for Sports Game Story by Matthew Slagle.

The Pacesetter award is determined by a tallying of points from all awards won by the school. This was the first time since 2006 that Palomar won the award.

Palomar Journalism students have been written up twice in the North County Times for the awards they have won, including an article in June where The Telescope won Best College Newspaper by the San Diego Chapter of the Society of Professional Journalists! Here is the link.

In March 2012, Palomar College’s journalism students earned 18 statewide awards for their campus newspaper, magazine and newspaper website at the annual state convention of the Journalism Association of Community Colleges (JACC). For the third year in a row, The Telescope received a state General Excellence Award for its campus newspaper, which is published 20 times per year. Palomar’s new campus magazine IMPACT and The Telescope’s redesigned website www.the-telescope.com <http://www.the-telescope.com> also received General Excellence Awards. The student-run publications beat out about 45 other community college journalism departments across the state.

Lastly, several of our students have secured internships or jobs because of the Journalism Department’s solid network of media contacts.

The Journalism Department took 17 students to Cal State Fullerton to compete against community colleges from all around Southern California. The staff won more than 20 awards in both on-the-spot and mail-in categories.

The Journalism Department took 13 students to Sacramento for the state conference of the Journalism Association of Community Colleges.  There, The Telescope earned 13 statewide awards in photography, news writing, sports writing, design, video journalism, critical review and others.

For the second year in a row, The Telescope received a state General Excellence Award for its campus newspaper, which is published 18 times per year. The Telescope staff also received first place for design, beating out about 50 other community colleges and 600 students across the state.

That article resulted in an award from the City of San Marcos. Here is a link to the video http://sanmarcos.granicus.com/MediaPlayer.php?view_id=3&clip_id=257

If you know of another accomplishment of a Palomar journalism student, please leave a comment below.